‘Deadpool’ (2016): Taking the Swagger out of Superhero Movies 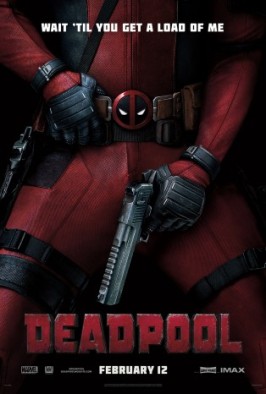 Few expected a success this smashing. Given the public dedication of star Ryan Reynolds, writers Rhett Reese and Paul Wernick, and rookie director Tim Miller to the Deadpool comics, as well as their production’s genius marketing campaign, hopes were high for Deadpool, “the movie.” Just how resounding the film landed is another story, however, with the movie smashing its way to over $260 million in its opening weekend (a record for R-rated movies) and nearly half a billion dollars in two weeks. That stuff sends shockwaves through the industry. A sequel has already been greenlit and numerous comic book properties, including Wolverine 3, are being considered with R-ratings in mind.

The fast, wild world of Deadpool features great supporting performances from T. J. Miller, Morena Baccarin, and Brianna Hildebrand (among many others!).

While I’m sure Hollywood will learn the wrong lesson from Deadpool’s success (copycatting its adult-oriented formula until everyone’s sick of it) instead of the right one (film content should not be censored for the sake of age-ratings, audiences desire something different more often than not, filmmakers should be allowed to take risks, limited budgets force filmmakers to be more creative and increase profit margins, etc.), the fact we may be witnessing the death of mainstream PG-13 blockbusters has me grinning from ear to ear. I told you it’s satisfying to watch people get shot with blood squibs. Murdering people is heroic!

In any case, what should we make of the soon-to-be most successful R-rated film of all time? Well, despite Deadpool’s dedication to breaking the fourth wall and lampooning its subgenre, Deadpool actually feels more like an adaptation of graphic novel source material than most other superhero films. Part of the reason for this is the filmmakers’ dedication to the character via the screenplay, but the gleeful, colorful, and incredibly bloody tone of the direction makes the movie feel ripped from the pages of a comic book in the best way possible. Deadpool is fun, hilarious, and liberated from the self-important saving-the-world scenarios of so many Avengers, X-Men, and DC movies. Deadpool feels like a one-off, random adventure issue #385 from your local comic store. It just works like that.

As for the specifics, Deadpool’s story is a basic origin story largely told in non-linear fashion and filled with wink-wink moments to the audience and blunt commentary on superhero movies and pop culture. The latter dialogue-based jokes grow repetitive and feel thrown in for mass audience appeal — you know, for the people who like The Hangover (2009), Trainwreck (2015), I Love You Man (2009), or Ride Along 2 (2016) — but the inside jokes directed at the X-Men series itself are on-point, and the lion’s share of the film’s comedy is visual and quite cinematic. My personal favorite funny moments include the montage sex-sequence (hey, filmmakers filming sexuality in a creative way!), the slow-motion freeze-frame opening credits, and of course the numerous fourth-wall breaks. Top to bottom, Deadpool features some of the best use of flashbacks and visual comedy in mainstream filmmaking.

Deadpool is also a competent action-movie. The opening act on a freeway is a wonderful combination of slow-motion violence and Ryan Reynolds’ quips, and the montage sequence that begins Reynold’s quest for revenge, as well as the finale atop an abandoned aircraft carrier, are excellent.

Rounding out Deadpool’s stellar features is a terrific soundtrack. Prepare for everything from hardcore hip hop to 1980s R&B, because this film is on the level of Quentin Tarantino’s eclectic pop culture selections. The music aides both the film’s comedy and action.

Perhaps what I like most about Deadpool is how it feels like a full-fledged action-comedy hybrid. It’s as funny as I expected Guardians of the Galaxy (2014) to be, which instead turned out to be a rather generic, if perfectly capable, space-adventure film with occasional funny moments. Deadpool reminds me of vintage Jackie Chan pictures and Edgar Wright’s genre spoofs like Shaun of the Dead (2004) and Hot Fuzz (2007). I can’t give much higher compliments.

Altogether, Deadpool is a triumph for both adult action fans and comic book junkies everywhere. Tim Miller, Reynolds, Reese, and Wernick made a movie for the fans and their risk-taking paid off in spades. I’m sure the euphoria over this success will be short-lived given how an eerily similar thing happened almost eight years ago with The Dark Knight (2008), and how Hollywood always overcompensates every time it smells money, but for now, let’s all agree that Deadpool hit it out of the fucking park. Even if it’s not a perfect action movie, it’s what Hollywood needed to shake itself from its bland, self-censored homeostasis.

SUMMARY & RECOMMENDATION: Deadpool is an incredibly subversive and irreverent picture, lampooning mainstream superhero-movie formula while simultaneously executing an effective superhero story all its own. It’s concise, well edited, and hits its tone perfectly. Sure, Reynold’s Wade Wilson isn’t exactly a “hero” in the traditional sense, and the story’s framework is little more than just that, but the devil’s in the details with Tim Miller’s excellent action-direction and visual comedy, Reese and Wernick’s excellent use of flashbacks, and Reynold’s great chemistry with co-stars Morena Baccarin, Ed Skrein, T. J. Miller, and Brianna Hildebrand.

— However… many of the pop culture references fall flat. Some of the action scenes use a little too many CGI “stunt doubles,” and Skrein’s antagonist is relatively one-note.

? See? You don’t need to be a superhero to get the girl; the right girl will bring out the hero in you.