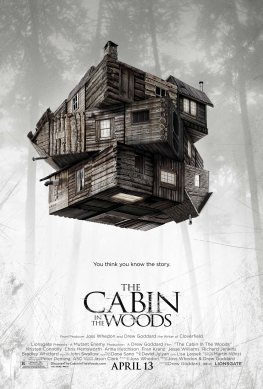 What has been described by writer-director Drew Goddard and writer-producer Joss Whedon as a “loving hate-letter to the (horror) genre,” The Cabin in the Woods is exactly what its Rotten Tomatoes consensus says it is: An astonishing meta-feat. I don’t say this often, but I don’t think I have ever seen a horror film like The Cabin in the Woods. Its premise and characters may seem familiar, but trust me, this is all set-up for one of the most enjoyable film-twists I’ve experienced in a long time. It is hard to describe Cabin in a way that does its nuanced script, ambitious themes, and off-kilter direction justice. The film’s tone is so eccentric and idiosyncratic that Lionsgate had a hard time figuring out how to market it, so in the end, they decided to advertise it as yet another gory torture-fest and teen-slasher movie. It was not until the first wave of critics and audiences saw it that word-of-mouth properly advertised what the film was. 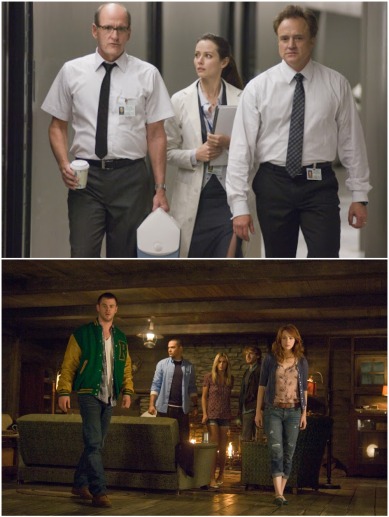 Top: The satirical heart of the film lies with Richard Jenkins (left), Bradley Whitford (right), and Amy Acker (center). Bottom: Our archetypal horror cast play their cliche-ridden characterizations to perfection, satirizing and yet subverting them at every turn.

The most condensed way of summarizing Cabin is that it is an analysis, satire, subversion, and tribute to the American horror genre all in one movie. It dissects the genre dedicated to fear itself, while also taking time to write a compelling and original story all its own. Cabin is an autopsy of the tropes, cliches, and patterns of logic horror audiences have grown accustomed to and been conditioned to accept over the decades. It examines why we, as viewers, accept rather incredulous and nonsensical things in scary movies, and spends a fair amount of time poking fun at standard horror plot-devices. Some particular horror stereotypes that are openly mocked are the now standard, cardboard-cutout character tropes (e.g. the jock, the stoner, the promiscuous girl, the good girl, the nerd), how characters in scary films act like complete idiots, and the recent resurgence of extreme gore and torture in horror films, also known by the terms, “torture-porn,” “gorno,” and “splatter films.”

Basically, the dumber the horror fan you are, the more you won’t like Cabin. In fact, most people will probably hate it. Most viewers dislike insightful, observant satire and tongue-and-cheek humor, due to the fact that most people do not understand or like satire. It confuses them. The minority of the population that can recognize and appreciate genre-parodies are considerable, and they support satirical sources of entertainment like The Onion and The Daily Show; but all things considered, they are nowhere near the size of the dimwitted masses, and don’t number enough to bring in the huge profits most film studios are looking for. A film like Deadpool (2016) was not successful because it satirized comic book-films (though it certainly did do that) — it was successful because it was something different, namely R-rated and extremely violent, it had a great marketing campaign, comic book-movies are popular right now, and its filmmakers were allowed to take chances. The industry satire was more of an inside joke.

Cabin is dripping with clever satire. Jokes abound left and right that show all the ridiculous horror trends and cliches for the laughable, childish things they are. Perhaps the best thing about the narrative is its hilarious metaphor that lurks in the background for most of the film’s runtime, and is so brilliant once revealed that you will die laughing… if you get the joke.

Drew Goddard’s direction isn’t groundbreaking so much in its shot-for-shot style, but rather its diversity of tone, visual aesthetics, and sense of humor. The character-acting from Richard Jenkins and Bradley Whitford to Chris Hemsworth and Kristen Connolly matches their scene-backgrounds and diverse set-designs. At times, Goddard threatens to genre-blend from bizarre horror-comedy to action-thriller and back again, but the constant unnerving threat from the aforementioned metaphorical background keeps the horror tone constant throughout the entire show.

The primary plot concerning Hemsworth, Connolly, Fran Krans, Anna Hutchinson, and Jesse Williams being attacked by “zombified pain-worshiping backwards idiots” is well structured, even better lit, and scary in its own right, but that surface-level narrative is constantly interrupted by hilarious commentary from Jenkins and Whitford. As the story progresses, the film’s cinematography becomes more dynamic and experimental. The various creature designs are overwhelmingly practical and impressive, as is the movie’s shift from a standard, Evil Dead (1981)-aesthetic to a more science-fiction horror style a la Cube (1997) or Event Horizon (1997).

In an effort to cover absolutely every horror convention, subgenre, and style, Cabin boasts a plethora of solid action-sequences and terrific gore-FX. The characters’ efforts to fight back are often subverted, in keeping with the film’s running satire, but as per the film’s equally important derision and criticism of said tropes, the entire cast is allowed opportunity to destroy the genre’s cliches with everything from fists, knives, and grenades to handguns and machine guns. This never-ending tightrope-walk between comedic satire and indignant subversion is the main draw for horror-fans fed up with the genre’s devolution.  It’s also a tribute to Drew Goddard’s directorial debut, how he managed to nail such a specific, atypical tone around a wacky premise.

If you appreciate satire and solid writing, you will have a damned good time with this movie. The Cabin in the Woods is one of the most fun, as well as one of the best, movies I have seen in years. It belongs among the select ranks of films like Ghostbusters (1984), Tremors (1990-2004), Robocop (1987), and Krampus (2015), an original project that challenges genre framework while also celebrating it, and nailing a perfect tone. From an innocent, unsuspecting beginning, to the outrageous, over-the-top finale that concludes with Trent Reznor screaming at you as the credits roll, The Cabin in the Woods is an awesome movie.

SUMMARY & RECOMMENDATION: The Cabin in the Woods is built upon a biting, merciless script that rips the horror genre to pieces while simultaneously paying homage to it and writing a worthy story of its own. All its characters have surprising depth and are memorable, funny, and unique in their own right. Richard Jenkins and Bradley Whitford own their roles. Drew Goddard makes one hell of a directorial debut, crafting a sort of psuedo-meta horror-anthology with grit, bloody violence, and fantastic scares.

— However… the film is so self-reflexive and introspective it may be too weird for many audiences, but in all fairness, that’s not the movie’s fault.

? I never got why Thor didn’t just take out his Mjolnir and smash all the zombies with it.