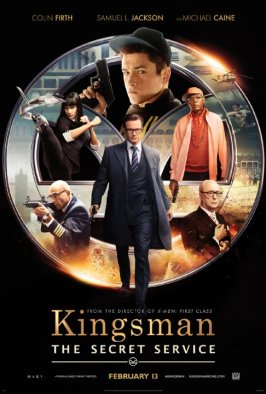 The first big movie out of the gate for 2015 is Matthew Vaughn’s action-packed, super-tongue-in-cheek/super-spoof of spy-thrillers, specifically James Bond movies. Kingsman does for spy-movies what Vaughn’s Kickass (2010) did for superhero movies: It’s a raunchy, politically incorrect, violent subversion of the subgenre and a playful “fuck you” to its mainstream counterparts. With specific regards to the Bond franchise, Kingsman parodies and lampoons the series’ tropes with gleeful abandon and utterly shameless nostalgia. It makes blatant social commentary that often comes across as blunt but on point, and every single character tick, bloody action scene, and contrived plot device is shoved down its viewers throats with the most heartfelt I-don’t-give-a-fuck-what-anybody-thinks-of-me attitude.

Welcome to Kingsman training, where you meet a bunch of rich snobs and a working-class Eggsy (far right).

If you’re unsure what to make of that opening paragraph, then I think I succeeded in summarizing how I and most people feel towards Kingsman. Many critics and audiences had a great time with it (how could one not? It’s a hilarious blast of fun time…), but many others were bewildered and overwhelmed by the film’s never-ending sardonic and often sloppy attitude to storytelling. The better your sense of humor and the larger your penchant for over-the-top violence, the more you’ll enjoy Kingsman. A healthy appreciation for genre satire helps too.

Really, the best way to wrap one’s head around a crazy, wild ride like Kingsman is to appreciate the “no-fucks-given” attitude I mentioned above. Cinematically speaking, as in real life, not giving a shit what people think is a double-edged sword; that attitude lets one fully express their inner emotions in an honest, if often brutal and blunt way that can be refreshing and tons of fun, but it can also be really off-putting and overstay it’s welcome if you truly never give a shit about what anybody thinks ever.

This take-it-or-leave-it tone pertains both to the film’s violence and satirical sense of humor as well as its social commentary. Kingsman is distinctly British in its analysis of socioeconomic inequality and class snobbery; where as most of the subjects discussed in the film would be seriously toned down in an American context, or otherwise converted to a commentary on sex or race (generally the latter), Kingsman is a working man’s middle-finger to the modern European nobility in the most blunt way possible; the film makes no attempts to hide its anti-upper class message, and like described above this attitude is both amusingly refreshing and somewhat annoyingly heavy-handed by the film’s climax.

Aside from its wacky, weird, but fun tone, Kingsman gets all the basics of filmmaking right, so long as one ignores its comical digital FX and distracting, obnoxious product placement. Its main character, Eggsy (a great Taron Egerton), is a relatable, well-acted everyman whose arc is clear, believable, and substantial. His mentor, Harry Galahad (Colin Firth), is by far the greatest character amongst a bizarre cast of weirdos as a sort of extreme, weaponized version of The King’s Speech (2010) titular role. Samuel L. Jackson is funny and weirdly effective as the evil Bond-villain parody who hates violence but decides to purge the world of humanity anyway, and even Mark Strong takes part as a hilarious espionage sidekick.

Taken as a whole, the characters are pretty fantastic —- it’s the story and its inconsistent tone that take some getting used and may put off people. I would offer more analysis of ways to tighten up the script and/or write a villainous plot that sounds a bit less ridiculous, but quite frankly I think Matthew Vaughn and principal screenwriter Jane Goldman wrote, directed, and executed exactly the film that they wanted to. Nothing here reads as unintentional or sloppily executed, even the purposeful sloppiness. Kingsman is very, very up front with what it is and what it’s about. It scoffs, parodies, and lampoons the Bond franchise and all it’s spy-thriller brethren (Jason Bourne, Jack Bauer, Ethan Hunt, etc.) with nothing held back. Do I even need to describe the gloriously shot and bloody R-rated action scenes that mock the PG-13 ratings of all those films? 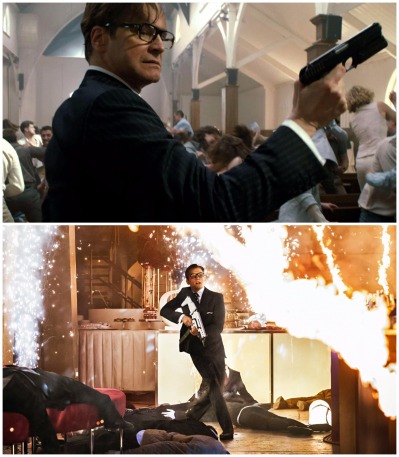 No, Kingsman does what it wants when it wants to. It’s hardcore, loud, proud, and in your face the entire 129-minute running-time. I respect its huge cajones and memorable and unique personality given today’s blockbuster landscape, but I also critique its sloppiness and narrative incoherence regardless if they are intentional. Just like Bollywood films often have intentional (or unintentional) caricatures in their films, simply being aware of one’s cinematic obnoxiousness is no free pass to being, well, obnoxious. Don’t get me wrong, Kingsman is a fine film and it most certainly succeeds as a hardcore parody of spy-films throughout the ages, it’s just not quite as badass and smooth as it thinks it is.

SUMMARY & RECOMMENDATION: Kingsman combines likable, funny characters with hardnosed satire dripping from every line and comedic setup. The film doesn’t so much reinvent the spy-genre as it doestear it apart and nail the remnants on a wall, similar to what The Cabin in the Woods (2012) did for horror films; Kingsman also boasts excellent actions scenes, including an amazing church-brawl centerpiece.

— However… much of the social commentary and the film’s nonstop sardonic humor clash; numerous plot-devices are either convoluted or poorly explained to the audience. The CGI and product-placement suck.

? Being a gentlemen has nothing to do with feeling superior to others; it’s about being comfortable in one’s own skin. Could that not be the definition to around 50 other intercultural aphorisms, sayings, or figures of speech? It’s that generic…