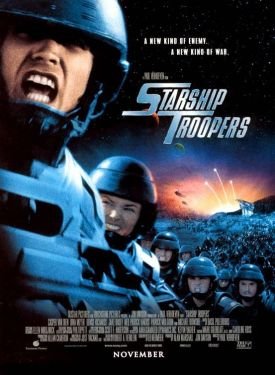 They sucked his brains out!

One of the most controversial and widely misunderstood films of the 1990s is Paul Verhoeven’s adaptation of Robert A. Heinlein’s 1959 novel of the same name. Much of its fame or infamy (depending on whom you ask) stems from its now classic over-the-top violence and extreme gore, a rarity for big budget blockbusters nowadays but a long established staple of Verhoeven’s filmography. Another recognizable mark of Verhoeven’s auteur style is his heavy use of tongue-in-cheek humor and allegorical social and political commentary. Many literary critics and fans of Heinlein’s original novel deride the film adaptation not only for its cinematic departure from the book’s narrative, but its unabashed and unapologetic parody of the material and the pro-militaristic, patriotic themes Heinlein championed.

The relationship between Heinlein’s book and the bizarre film-adaption it spawned is one of the most fascinating artistic responses in both film history and 20th century literature. Even if you hate one or both of the projects, these incarnations of the original space-marine tale represent a totally unique call-and-response conversation between two vastly different artists from completely opposite backgrounds.

Robert Heinlein drew from his military background serving in the US armed forces in the 1930s, as well as his adulthood during World War II. To my knowledge, he was as an officer in the US Navy but never fought in a foreign war. Verhoeven’s film “adaptation,” while bearing the same name and a similar story to the book, is in fact more akin to Joe Haldeman’s The Forever War (1974), an anti-war science-fiction novel that was written in direct response to Heinlein’s very pro-military, pro-national service book. In fact, ST the movie was first written as an original script but then later retrofitted to serve as an official film version of Heinlein’s book.

Haldeman, unlike Heinlein, served and saw combat in a foreign war, and a particularly bad one at that, the Vietnam campaign. Similarly, Verhoeven grew up in Nazi-occupied Netherlands before and during WWII, so he skews and warps Heileins source material with absolutely no remorse; in response to cast member Michael Ironside’s question as to why he would make a supposed right-wing fascist film, Verhoeven stated:

“If I tell the world that a right-wing, Fascist way of doing things doesn’t work, no one will listen to me. So I’m going to make a perfect Fascist world: Everyone is beautiful, everything is shiny, everything has big guns and fancy ships, but it’s only good for killing fucking bugs!”

I think this is where most book-fans had trouble with the movie; they couldn’t and still can’t look past the movie’s intentional subversion of the original novel’s message and judge the film on its own terms. They liked the book, so a movie that calls itself by the same name, claims to be an adaptation of the same or a similar story, and yet makes fun of that book, must be a poor film by default. 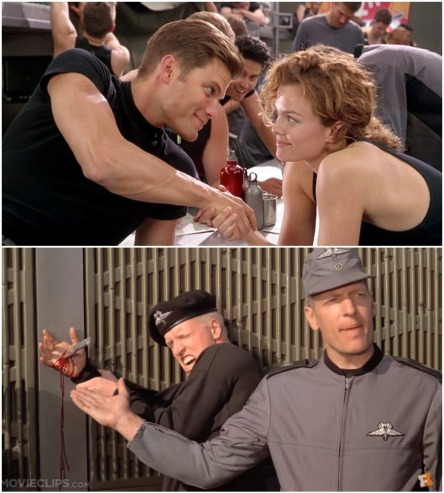 Regardless of the film’s deceptive name or marketing, I argue that you have to give Verhoeven and his film credit where it is due. The satire is pretty spot-on and humorous in its over-the-top yet subversive style. The futuristic world presented in ST is an overtly fascist, 3rd Reich-esque military-dictatorship where citizenship is achievable only through military service, capital punishment is broadcast across “all net, all channels,” and propaganda videos in the style of Triumph of the Will (1935) punctuate the main narrative. The official insignia of the military federation forces resembles the Nazi Parteiadler and the commanding-officer uniforms recall Gestapo attire.

The main conflict between the human federation and the extra-terrestrial arachnid enemies is portrayed as a senseless, corrupt, nationalist meat-grinder where men and women are sent to the front lines to die by the thousands. Numerous hints throughout the movie imply that the main cause of the war is not alien bug aggression but rather human imperialism, and the endless carnage is maintained through “calls of duty and federal service” and various other subtle and not-so-subtle jingoistic politics. Verhoeven has stated on numerous occasions that the face-value of his film is, “Let’s all go to war and die,” but the true message lying just under the skin is really, “War makes fascists of us all.”

Even if you find the movie’s irreverence for its namesake offensive or are right-wing yourself, you have to admire the film’s dedication to its absurdly caricatured premise, story, and characters in service of some hilarious jokes and stupendous violence. In the vein of Verhoeven’s earlier satirical action-films like Robocop (1987) and even John McTiernan’s Predator (1987) from the same year, ST features some of the best quotes in action-movie history, including but not limited to:

It’s impossible to view this movie, with its jingoistic attitudes, extreme violence, and blatant fascist imagery played for laughs, and take it seriously on any level whatsoever, and people either seem to view that as an extreme positive or negative depending on what side of the artistic and political spectrum they lie. One could simply view Verhoeven’s film as a silly, funny, dumb sci-fi action movie with great effects, but I’d argue ignoring or not appreciating its satirical overtones would be missing half the fun.

It’s really hard to slap a rating on a film like this, even if you hate or love the movie. On the one hand, its story is comical and thematically absurd, its characters are fascist caricatures, and its dialogue is hopelessly cornball, but on the other hand, all those elements are expertly played for hilarious one-liners, depressingly realistic social commentary, and brilliant political parody. To that end, ST features outstanding CGI, great gore effects, outstanding action sequences, and is well paced with characters who have clear goals and development. You can rightly call numerous aspects of this film obvious and over-the-top, but for my part the story is still a more subtle and nuanced satire than something like Stanley Kubrick’s beloved Dr. Strangelove (1964), which makes its agenda clear right from the get-go and never changes its rhythm once.

I think most, if not all the hate this film received since its release is from nerds who can’t look past their love of a good book to evaluate an adaptation objectively, or is from prudes who are missing the film’s point entirely. Verhoeven’s ST has garnered a consistent and strong cult following, and for good reason; if you’re not into sci-fi action or can’t stand much blood on-screen, it’s hard to recommend this film enthusiastically — if at all — but for those who like their cinematic violence served hardcore and their satire poking through their cheek in the style of, say, Kingsman: The Secret Service (2015), I can’t recommend it enough.

SUMMARY & RECOMMENDATION: Starship Troopers portrays a fascist dystopia that is bested only by Verhoeven’s own Robocop in terms of effective and hyper-violent satire. Here, the bloody action and jingoistic one-liners aren’t just for show, they’re the entire thematic point of the movie. The script is well paced and allocates adequate time for us to get to know our “heroes” and develop their goals and personalities. Michael Ironside and Clancy Brown portray two of the best sergeants in movie-history.

— However… the love-triangle is necessary for the story, I suppose, but rather vacuous. The psychic angle of Neil Patrick Harris’ character makes absolutely no sense.

—> RECOMMENDED*… (but keep in mind the aforementioned caveats)