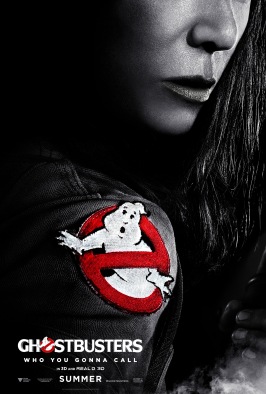 Let me start this review by admitting I am not a diehard Ghostbusters (1984, 1989) fan. I rewatched the 1984-movie as a young adult and respected it for its comedic talents, unique genre-blending identity, and unforgettable deadpan humor. That being said, I did not grow up worshiping the franchise nor do I have much patience for film comedy in general. Outside of genre-satires like Tremors (1990-2004), Krampus (2015), Starship Troopers (1997), or the works of Edgar Wright, comedy may be my least favorite genre in cinema. As I’ve stated numerous times on this site, most modern American comedies are little more than lightly edited improv, with actors talking at each other in close-up  for 90-120 minutes, occasionally taking breaks for poop, fart, or sex jokes.

Which brings us to Paul Feig. While the man puts more effort into his film comedies (Bridesmaids [2011], The Heat [2013], Spy [2015]) than most, and he is able to write a screenplay worth a damn, his comedies retain the same stale, generic, improv-style of mainstream Hollywood comedies. The only thing that distinguishes his filmmography from the likes of Judd Apatow, Adam McKay, and Todd Phillips is that his films star female comedians.

And that brings us to Sony’s 2016 Ghostbusters-remake. Upon hearing that Sony was rebooting the title with an all-female cast in mid-2015, my first reaction was: “Everyone’s gonna reject it. It’s gonna flop!” So far, based on my calculations, my predictions weren’t far off. Why?

For one, Ghostbusters (2016) is no different than the unnecessary Conan the Barbarian (2011), Total Recall (2012), or Robocop (2014) remakes, all of which either flopped or underperformed at the box office. All four of those originals are popular, classic titles that hold up to this day. While any reboot, hard or soft, has a chance to succeed, studios attempting to rehash lightning-in-a-bottle type properties that were unique to their time-periods are most always doomed to fail. Add to that how Sony flipped the cast’s genders in the most simplistic way (a sales gimmick, in other words), hired a director who was not a good fit for the material (Feig), and responded to fans’ negative reactions to their terrible marketing campaign by labeling any detractors as misogynists, manchildren, basement-dwellers, sexually inept fanboys, etc., and the studio was asking for trouble before their film even released.

Regardless of your opinions on Sony, Feig, the new cast, or Ghostbusters in general, attacking your core audience is never a good idea, particularly if you’re banking on misplaced brand-nostalgia to recoup hundreds of millions of dollars and start a new franchise. Contrast Sony’s disastrous public relations and marketing campaign with Paramount’s rebooting of Star Trek (2009), or better yet, Walt Disney’s masterful relaunch of Star Wars in The Force Awakens (2015). Those studios respected the original properties by paying tasteful homage to them and bridging the older casts with the new. If studios need to milk these franchises (which, they do), that’s how you do it.

All of this might be forgivable if Paul Feig had figured out how to make a good movie, but alas, he didn’t. After swallowing my pride, ditching $5.99 (I live in a small-town), and giving the film the benefit of the doubt after a horrific marketing campaign, I did indeed pay to see this film and judge it on its own merits. It doesn’t have many.

What bugs me about 2016 Ghostbusters is how it’s neither entertaining nor a good movie. It’s not a terrible, offensive disaster, but then again neither was Fantastic Four (2015), and look how people shredded that. Aside from most every joke falling flat and being little more than vague, random pop culture references (e.g. “You get a car, and you get a car, and you get a car!“), the film is choppily edited, its plot is hackneyed, and its characters are irritating. Kristen Wiig looks like she could not give a fuck (not that I blame her), Melissa McCarthy won’t stop talking, Kate McKinnon gives the worst performance of her career, while Leslie Jones is the most relatable of the cast when she’s not screaming.

Other than Kate McKinnon, who is so insufferable I wanted to close my ears whenever she went into one of her goofy, wacky, crazy scientist-routines, I don’t blame the cast too much for getting dragged into this mess. Most of the blame lies on Sony (namely former CEO and producer, Amy Pascal) for rebooting this property in the first place, and Paul Feig for turning it into a Saturday Night Live-esque parody of the original film. Almost every scene is filled with non-stop, unfunny improv that drags on for five minutes, or McCarthy constantly yammering nonsense about wontons or paranormal jargon she has no idea how to pronounce. Feig’s idea of comedy is continuous, loud dialogue regardless of how juvenile, nonsensical, or out of context it feels.

In short, the new Ghostbusters remake is a shallow, lazy, uninspired parody of the original, containing none of the 1984 classic’s distinctive humor or genre-blend appeal. This film will not appeal to fans of the original or fans of that style of dry, sarcastic humor. If your idea of a great cinematic comedy-experience is Pixels (2015), or you have a five year-old to distract for two hours, this film might suffice. Otherwise, stay far away, don’t waste your money, and don’t feel guilty about not making a political act out of seeing this movie. Sony got desperate, they made a lazy attempt to revive an old property with a filmmaker who did not care for the original, nor has a style suited for a remake of such, and both Sony and Feig played with fire by disrespecting the fans, who have since called their bluff on this forgettable reboot. If you’re reading this, wondering whether 73% (195/267) of critics have given this movie glowing reviews primarily based on the psuedo-political fallout of the film’s marketing campaign, I have an answer for you: That is a very, very good question, and the answer is YES.

SUMMARY & RECOMMENDATION: Ghostbusters 2016 has the same maturity and comedic wit of an Adam Sandler film, and the shoddy production values and lazy editing befitting such a project. Leslie Jones is the lone actor in this entire film who tries her best, with Kristen Wiig making it painfully obvious she regretted ever getting involved with this movie, Melissa McCarthy acting her usual loud, irritating, unfunny self, and Kate McKinnon portraying a laughable stereotype that would put a Michael Bay-movie to shame. This film boasts some of the worst improv I have ever seen.

? If you’re concerned with marginalized communities and their representation in both the arts and society, need I remind you of a certain election occurring later this year?