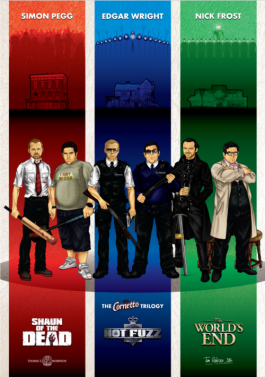 Arguably the most popular comedy auteur among modern cinephiles and by far the genre’s most energetic director, English filmmaker Edgar Wright burst onto the international mainstream with his critically acclaimed and financially successful “Cornetto Trilogy,” which includes 2004’s Shaun of the Dead, 2007’s Hot Fuzz, and 2013’s The World’s End. These films not only reminded the world of the true power of cinematic visual comedy, they also established lead actor and co-writer Simon Pegg as a veritable movie star. Wright has since expanded his filmography with his best film, Scott Pilgrim vs. The World (2010), and his action debut, Baby Driver (2017), but he will be forever most associated with this eclectic trilogy.

Much has been discussed about the lackluster state of modern comedy in feature-films, how most audiences are unfamiliar with visual comedy in mainstream film and associate movie comedies more with lazy pop-culture references, contrived superhero-esque quips, and other types of dialogue-driven humor. Most viewers are more comfortable with watching a series of feature-length skits in the vein of Saturday Night Live or pause-for-laughter gags familiar to standup comedy. To say that comedy cinema doesn’t push boundaries anymore as in Some Like it Hot (1959), Dr. Strangelove (1964), Blazing Saddles (1974), Monty Python (1975, 1979), Ghostbusters (1984), or Groundhog Day (1993) is stating the obvious. Straightforward comedies based on visual humor or satirical concepts, particularly those not diluted through bizarre hybridizations of action, science-fiction, or horror, don’t exist anymore.

Left: In Shaun of the Dead, Simon Pegg (right) and Nick Frost (left) can’t decide what they think of their new undead antagonists. Right: In Hot Fuzz, Pegg and Frost attempt to capture a runaway swan in West Country. Hilarity ensues.

To be fair, The Cornetto Trilogy, as it was retroactively named via an offhand joke by Write himself, contains trademark features of the horror, action, and science-fiction genres in Shaun of the Dead, Hot Fuzz, and The World’s End, respectively, but each film keeps its comedic tone front and center. Almost every sequence in all three films, no matter how mundane or subtle, utilizes the camera, sound FX, and blocking of actors to satirize or tell a joke. Audio-visual gags are used as storytelling devices, rather than as cheap, unearned laughs like a fat person falling down stairs or someone farting. You will not find major or minor characters making obtuse pop-culture references that would date themselves in two years, nor any pointless celebrity cameos.

Instead, Edgar Wright uses various non-comedy genre tropes to make often clever, often insane jokes about cinematic narratives and character arcs most audiences take for granted. Wright and company lampoon the self-serious, over-the-top melodrama of most zombie films in Shaun, the casual ultraviolence of most buddy-cop movies in Hot Fuzz, and the incredulity of various alien-takeover plots in The World’s End. Within each film is a more serious, heartfelt relationship study between star Simon Pegg and his assorted goofy, schlubby, immature friends.

The Cornetto Trilogy could be interpreted as coming-of-age films that warn of the dangers of prolonged adolescence, the refusal to grow up, as all three stories involve some matter of broken adult relationships as a function of childhood insecurity and inability to deal with the responsibilities of adulthood. These films provide enough mature, weighty material for adult viewers uninterested in juvenile comedy or genre commentary, and in combination with Wright’s enviable ability to generate laughter from the most casual of camera pans, hard cuts, match cuts, and awkward sound FX, this trilogy are the rare “hardcore” genre films to appeal to everyone.

To elaborate on each movie, Shaun of the Dead follows Pegg as a disorganized, lazy, middle-class deadbeat with no ambition or prospects. His life is boring and directionless until a zombie apocalypse just so happens to interrupt his personal quagmires, thus forcing him to come to terms with his parents, his best friends, and girlfriend as they try to avoid becoming members of the growing undead hordes. Pegg stars as the inverse stock character in Hot Fuzz, a straight-laced, overachieving, by-the-book, perfectionist London cop who gets banished to the English countryside as punishment “for making the rest of the department look bad.” Sooner or later, Pegg discovers not all is as it seems in the idyllic, laid back town of Sandford, where mysterious murders pop up as the townspeople prepare for their annual “Village of the Year” competition.  The World’s End bookends the trilogy with Pegg portraying a grown-up frat boy (what’s the British equivalent?), trying in vain to recreate his mates’ university pub crawl as aliens invade. If that isn’t an effective antidote for overgrown man-children, then I don’t know what is. 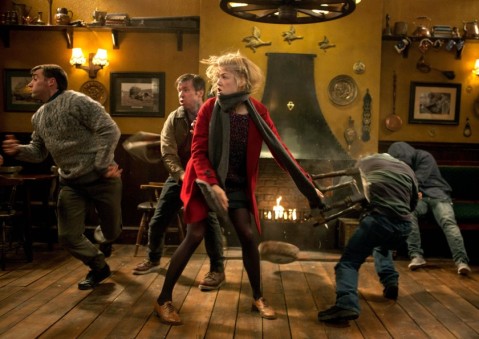 Each genre-deconstruction is more icing on the cake than the meat of each story (what a hackneyed metaphor!), and Wright and Pegg wisely keep the comedy at the forefront despite each film growing more wild and crazy as they develop. All the stories are taken seriously, of course, but never at the expense of a good joke. This multi-layered comedy feels more natural than a quasi-action comedy like Guardians of the Galaxy (2014, 2017), despite flaunting more ostensible horror/action/sci-fi genre trimmings than most generic Hollywood blockbusters.

If you’re a fan of English comedy or cinematic humor, and could stand a break from glorified comedy skits or bloated, feature-length stand-up routines, Edgar Wright’s Cornetto series provides a welcome alternative. It’s not solid gold throughout, as some of Simon Pegg’s shouting and Nick Frost’s mumbling grow repetitive, and even Wright’s energetic cinematography (courtesy of veteran directors of photography David Dunlap, Jess Hall, and Bill Pope) becomes exhausting at some point. Still, it’s hard to criticize these films too hard when their humor is so diverse, consistent, and most importantly, cinematic. This isn’t classical theatre or a New York comedy club — use the camera and editing to make some jokes, for once! On that, Wright and company more than oblige.

SUMMARY & RECOMMENDATION: The Cornetto Trilogy is a masterclass in terms of inventive cinematography and charismatic editing styles as tools of comedy. Whether your tastes in humor are “smart” or “stupid,” chances are Edgar Wright has something up his sleeve to make you laugh with everything from an awkward zoom to extreme lighting ques to a good, ole-fashioned fence-jumping gag. Wright doesn’t reinvent the cinematic comedy wheel, but he does reboot it with the tools filmmakers are supposed to use.

? What’s the matter, Danny, never taken a shortcut, before?