‘Back to the Future’ (1985): Near Flawless Science-Fiction Comedy

I’m not the biggest fan of movie comedies. I don’t know if this is because my sense of humor is too dark, dry, or deadpan to work in most big, broad, mainstream comedies starring Seth Rogan, Amy Schumer, Paul Rudd, or Melissa McCarthy (probably), or if I’m such a film purist I can’t appreciate what are essentially standup routines in edited movie-format in the aforementioned actors’ filmographies. In any case, most comedies (romantic or otherwise) I do enjoy usually have some sort of political or social satire or genre-twist to them. Edgar Wright’s Cornetto Trilogy (2004, 2007, 2013) comes to mind, as do Ghostbusters (1984) and Groundhog Day (1993). Besides these spicy comedy mixtures, I find the film genre as a whole rather bland, especially in terms of cinematography, direction, and overall story creativity.

Top Left to Bottom Left, Clockwise: Biff harasses a young George McFly, while the latter’s son looks on in shock, Doc Brown introduces the DeLorean to Marty, George thanks Marty for restoring the space-time continuum, and Marty reconnects with Doc in 1955.

Perhaps the genesis of my snobbish comedy tastes originated with Robert Zemeckis’ 1985 film, Back to the Future, one of the director’s early breakout films and one of the defining blockbusters of the 1980s. The film blends science-fiction time-travel concepts, coming-of-age family drama, and romance to create an enduring story that holds up to this day. 2015 (the year visited in the first sequel) has come and gone, and Back to the Future’s hilarious jokes, creepy Oedipal sensuality, and souped-up DeLorean time-machine remain trendy pop culture references and memorable hallmarks of perhaps the greatest movie about time-travel ever made.

My favorite element of the film’s humor is how so much of it is visual or situational. Few jokes in BttF are based in random dialogue punch lines or lame slapstick. Multiple jokes come in the opening tracking shot across Doc Brown’s (Christopher Lloyd) laboratory without needing a single line of dialogue or complex staging. When the film does use slapstick, it’s incorporated organically into the story and helps describe or develop the characters. A miscalculated amp sends star Michael J. Fox flying through the air, an exciting car/skateboard chase ends with antagonist Biff Tannen (Thomas F. Wilson) crashing into a manure truck, and Fox’s first travel back in time leads to a goofy crash into a farmer’s barn. Still more humor stems from simple, yet effective staging and thematic symmetry, like when main character Marty McFly (Fox) witnesses Biff bully his father, George McFly (Crispin Glover), in 1955, choreographed identically to his adult bullying in 1985. Yet another comedic situation involves McFly literally butting noses with high school principal Mr. Strickland (James Tolkan, also principal when his father went to school), and the following exchange ensues:

Mr. Strickland: “I noticed your band is on the roster for the dance auditions after school today. Why even bother, McFly? You don’t have a chance; you’re too much like your old man. No McFly ever amounted to anything in the history of Hill Valley!”

BttF is filled with moments like these, made all the more memorable due to Zemeckis’ and Bob Gale’s excellent script, whose story is endearing and characters are lovable. Fox’s McFly resembles your basic down-on-your-luck protagonist, somewhat restrained by his own insecurities and with a bit of a chip on his shoulder. Still, he’s no pushover and feels far more relatable than your average nerd-stereotype. He’s got ambition, a good sense of humor, he takes little crap from his enemies, and he starts the film with a girlfriend already on his arm; the major arc of the film concerns the love story between his parents, in fact, and through this BttF demonstrates the appeal of a narrative where the primary romance does not concern the protagonist. Kal Ho Naa Ho (2003) and Ferris Bueller’s Day Off (1986) also pulled off this dynamic very well, and it’s one I wish we saw more often in filmmaking.

The final element of the movie worth analyzing is Fox’s chemistry with costar Lloyd. In addition to the love story between Glover and Lorraine Baines-McFly (Lea Thompson), Marty and Doc Brown’s friendship is the core which holds the overarching story together. It’s an intriguing relationship between two completely different archetypes — a feisty teenager and a mad scientist — that remains one of the great on-screen pairings in cinema history. It feels unique given how normally the dynamic between characters of this age-range would play more like a mentor-mentee relationship, such as that between Sir Alec Guiness’ Obi-Wan Kenobi and Mark Hamill’s Luke Skywalker in Star Wars (1977). Fox and Lloyd feel like a true, equitable friendship built upon mutual respect and contrasting character strengths, a fiery cocktail of youthful vigor and wacky elderly perspective. 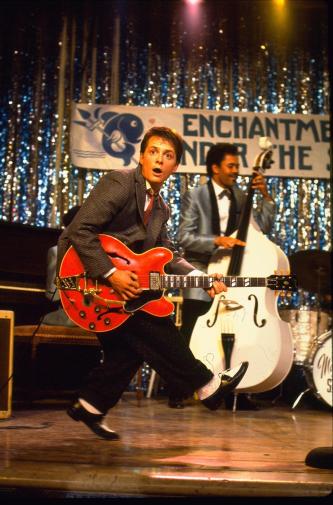 Marty McFly introduces the world to rock ‘n roll before it’s ready — but their kids are gonna love it!

Back to the Future is one of those universally enjoyable, endlessly entertaining motion pictures like Fury Road (2015), Tremors (1990), or Toy Story (1995) that you can recommend to anybody. It’s a near perfect movie, as far as I’m concerned; I struggle to think of a single negative element worth mentioning, let alone analyzing. I haven’t met one person who doesn’t like this movie, and yet its appeal can’t be correlated to a shallow story or any convenient character stereotype. It’s a smart yet universally appealing picture that proved audiences can respond to a story that treats them like adults and bothers to think outside the box. Back to the Future is a timeless movie that checks off every box of efficient, effective filmmaking and bothers to think of comedy in terms of cinema, rather than however many standup routines one can cram into 100 minutes where actors stand and talk at each other in close-up. It’s a true mixed breed of sci-fi, comedy, and coming-of-age romance, and it succeeds on all three fronts with flying colors.

SUMMARY & RECOMMENDATION: Like I said, I cannot recommend a movie higher than I can Back to the Future. I find it as enjoyable now as I did when I was ten years old. Like Star Wars, I’ve grown to appreciate it more as the years go by and have a greater understanding of what makes the movie tick. It runs high on a stock pile of creative, cinematic humor, playful musical and action set-pieces, and terrific characters you’ll remember forever.

—> Back to the Future comes HIGHLY RECOMMENDED.

I love movies, music, video games, and big, scary creatures.
View all posts by The Celtic Predator »
« ‘Terminator 2’ (1991): The Greatest Franchise Sequel in Decades
‘Jurassic Park’ (1993): The Definitive Benchmark for Dinosaurs on Film »

2 thoughts on “‘Back to the Future’ (1985): Near Flawless Science-Fiction Comedy”