‘Overlord’ (2018): The Best Nazi-Zombie Movie That Will Ever Be Made 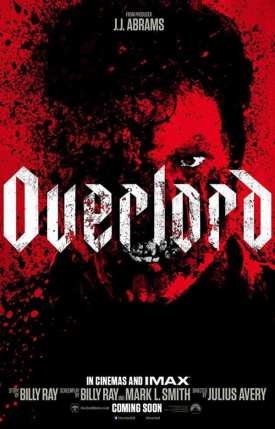 In the not-so-distant past of 2015, I saw a great trailer for a film I’d never heard of before — not on the Internet, though the grapevine, from friends, or otherwise — Krampus (2015), written and co-directed by Michael Dougherty, the mind behind the fantastic Trick ‘r Treat anthology horror film (2007) and writer-director of the upcoming Godzilla: King of the Monsters (2019). Krampus was a wonderful, creative genre film that sneaked a small box office profit in between the Hollywood heavy-hitters of Creed (2015) and The Force Awakens (2015); it flaunted great stock characters, creepy practical FX, inventive creature-designs, and stellar sound-design that made it stand apart from the typical for-all-ages blockbuster fair. It was a throwback narrative in the vein of both A Christmas Carol (1843) and the works of Joe Dante, a deceptively intelligent genre-blender that mixed and matched everything from horror to fantasy to comedy. It was the sort of mid-budgeted, concept-driven picture that populated American cinemas in the 1970s and 80s, which has since evolved for and transitioned to the modern streaming era. Films like Krampus being released in theatres, however, let alone in wide release schedules, are the exception, not the rule. 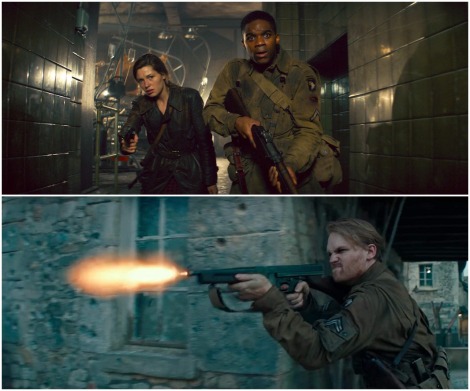 But exceptions are not once-in-a-lifetime miracles, as was demonstrated last week with the release of Bad Robot Productions’ first adult-oriented feature, Overlord. Written by veteran Hollywood screenwriters Billy Ray (The Hunger Games [2012], Captain Philips [2013]) and Mark L. Smith (The Revenant [2015]), and directed by newcomer Julius Avery, Overlord is the Nazi Oculist/Nazi Zombie/Wolfenstein film genre fans have always wanted, and allows us science-fiction weirdos to discard all those terrible schlock wannabes like The Outpost (2009, 2012, 2013) and Dead Snow (2009, 2014). Overlord is an intense, well paced, well executed genre hybrid that takes its fantastical subject-matter seriously, yet flaunts its insane central promise with gleeful abandon, much like the demonic Krampus.

As crazy as Overlord’s violence and energy are, however, like all quality films, dramatic, genre, exploitation, or otherwise, the film is based on a solid foundation of quality direction, memorable characters, and slick post-production finishing. Julius Avery may have a future in action filmmaking given his command of everything from close-quarters combat to pulse-pounding shootouts to gore FX. Gunshots are deafening like in most Michael Mann crime dramas, while blood squibs are frequent, gory, and spectacular without being gratuitous. Avery interchanges numerous suspense sequences with occasional set-pieces of explosive violence, utilizing tension to both tease and thrill. Both intra-scene and overall structural editing are strong, maintaining tensity from the opening airdrop prologue to the beautifully choreographed, action-packed finale.

A couple long-takes filmed from green-screens and subtle dollies stand out from the misce-en-scene focused cinematography, courtesy of directors of photography Laurie Rose and Fabian Wagner, but for the most part Overlord’s traditionalist direction emphasizes its scenery, sound-design, and explosive violence over flashy camera moves or handheld techniques. This is to the movie’s benefit, as oftentimes less camera-movement is more effective (*glances at Alejandra Inarritu*)…

Sections of the film that have little to nothing to do with Nazi science experiments or Occultism (re: most of the first act) give Mel Gibson’s Hacksaw Ridge (2016) and David Ayer’s Fury (2014) a run for their money as some of the better war sequences of the past decade. Add to that the grim sci-fi and horror overtones of Overlord’s historical fiction, and you have a charismatic diegesis bursting with style. Avery unfolds the screenplay’s fantastical elements at a deliberate pace, building to the story’s inevitable reveal of twisted Nazi experiments, body horror, and Occultist conspiracy. The film introduces these weird, borderline absurdist elements so tastefully they are both convincing and frightening.

My few complaints with the film have to do with some on-the-nose stock characters (there’s a tough-tawking New York stereotype, a cowardly and/or incompetent private, a gruff sergeant, etc.) and the overuse of musical score. The latter criticism is surprising given how most modern blockbuster scores are so bland and forgettable they’re little more than background filler, while I prefer the classical scores of Alan Silvestri, Jack Horner, Danny Elfman, etc. Overlord’s problematic use of music, if one can call it that, is how its score is so ubiquitous and mixed so loud it clashes with some of the film’s more suspenseful moments. That’s a minor critique, however. 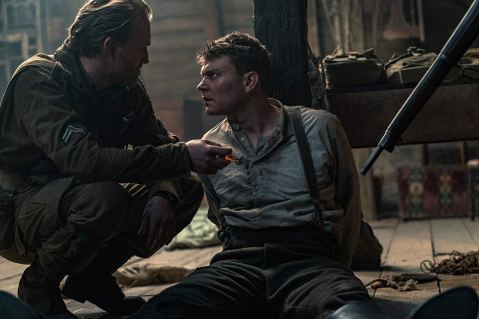 Overlord is as unique as Hollywood blockbusters come these days, a mid-budgeted genre-hybrid that’s neither family friendly nor exploitative. Yet, it’s so confident in its execution and original in its style and tone as to be impossible not to recommend. Its characters are likable, yes, but they are a small part of a larger cinematic package of effective, old-school cinematography, great pacing, in-camera special FX, and immersive sound-design. The pulpy mad-scientist overtones and quasi-undead antagonists are “just” cherries on top of this gory, gritty, otherwise classical throwback war film. It’s Krampus all over again, and I couldn’t be happier. This is the greatest movie to ever — and probably will ever — feature Nazi zombies, and you shouldn’t miss it.

SUMMARY & RECOMMENDATION: Overlord’s affection for grindhouse genre fare is outdone only by its attention to cinematographic and editing detail. Its assured cast — free of any stars or even semi-famous names — give it enough of a human face to be relatable, but its the direction and vision of its creative authors that are most memorable. Overlord’s narrative feels ripped from the cover of a Wolfenstein first-person shooter, while its direction references everything from Saving Private Ryan (1998) to Raiders of the Lost Ark (1981), and its that combination of genre aesthetics that make it special.

— However… likable though the cast are, more than a couple supporting roles verge past archetypes into outright stereotypes, while Jed Kurzel’s memorable score is surprisingly overused at times. Silence is memorable, too.

? I don’t know why, but Nazi villains are especially satisfying these days. OK, I take that back… I know exactly why. Let’s drive this trend into the ground!