George Lucas and Steven Spielberg, once friendly, film student rivals and now long-established movie-brat BFF’s and corporate partners, have always had a penchant for the science-fiction and adventure serials of Hollywood’s Golden Age. Comic strips and short films of the character Flash Gordon are what indirectly spurred Lucas to write and direct what would eventually become Star Wars, while 1930s-1940s tomb raider tales and Sherlock Holmes mysteries gave birth to Spielberg’s and Lucas’ now classic Indiana Jones trilogy.

Needless to say, the enduring legacy of Indiana Jones, including and especially Raiders, is primarily due to Spielberg’s spectacle and auteur control. What led to the first three films’ success was Spielberg and Lucas sticking to their natural movie-making strengths as director and producer, respectively. If Lucas had had his way from the start, Harrison Ford would have never gotten the lead role, but thankfully Spielberg and producer Frank Marshall’s influence, along with Ford’s then rising star after Star Wars (1977) and The Empire Strikes Back (1980) assured that the right man got the job.

Indiana Jones doesn’t mess around when it comes to Nazis, treacherous French scumbags, or national treasures.

And just what is that job, exactly? Well, other than encapsulating and preserving the quintessential tomb raider and archaeological adventurer (sorry, Lara Croft), Ford’s Indiana Jones is one of a handful of timeless movie badasses and heroic representations of pure masculinity; James Bond is perhaps the only cinematic counterpart that both predates and equals Jones’ enduring ideological legacy.

And that’s where much of the charm of those characters lie; neither Jones nor Bond (or similar ones like Judge Dredd, Jason Bourne, Jack Bauer, Ethan Hunt, etc.) are particularly deep or realistic characters in any regard; the appeal of these icons is not in their relatable humanity but rather their exalted superiority to that. Badasses like Jones or Bond (with the possible exception of Casino Royale’s [2006] portrayal of the latter) are worshiped not because they’re like us Average Joes, but because us Average Joes want to be them!

Now don’t get me wrong, Ford brings a lot of relatable likability and personality to the role, and he’s arguably the only person of his era who could’ve pulled the character off so convincingly, but the depth ends there, and that’s OK. Spielberg and Lucas sell us this embodiment of rugged, hardcore masculinity and a neat fantasy-adventure world in which to play, and Ford represents the handsome human vessel for our aspirations and fantasies. In many ways the IJ series is an example of true synergy, lightning in a bottle, even, in similar fashion to Star Wars. It’s important to distinguish, however, between a badass like Jones whose strength and appeal stems from what he represents, and from other badasses like James T. Kirk or even Han Solo, whose appeal stems from their actual character and deeply imbued humanity. Characters like Kirk or Solo can operate in a variety of environments and wear a multitude of costumes and still operate just fine, while someone like Jones or Bond need specifically designed narrative and cinematic environments in which to thrive. You can’t have Indiana Jones without the hat, nor can you have Indiana be old or barely keeping up with the action.

As for Raiders specifically, the main things that set it apart and above the rest of the franchise are its tighter narrative, great female lead (Karen Allen as the loaded pistol, Marion Ravenwood), and several iconic set-pieces and hilarious moments that the sequels, even the excellent first two, were unable to match. Unquestionably the pinnacle of Indiana’s badassery is the moment where he shoots an imposing Arabian swordsman while searching for a kidnapped Marion, and simply walks off, almost as if bored by the whole affair.

There’s nothing particularly special or unique about Raiders‘ premise or story, at least on paper: Biblical themes and Nazi Occultists, tomb raiding and archaeological intrigue mixed with classic spy-thriller politics, lots of punching and shooting, etc. It’s very James Bond-esque in many ways, though both Jones and Bond owe obvious debt and narrative lineage to adventure serials, comics, and mystery novels that predate them and even cinema. What propels Raiders of the Lost Ark to another level are Spielberg’s epic direction, Jones’ charismatic performance, and John Williams’ unforgettable score. 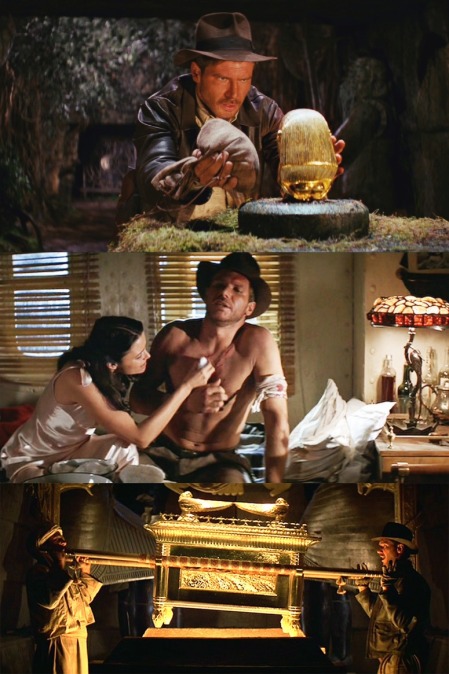 Top to Bottom: (1) Indy prepares to retrieve a golden idol in the mountains of Peru, (2) Marion tries to mend Indy’s wounds much to his dismay, and (3) shebam(!) they retrieve the lost Ark of the Covenant!

Remember, we’re dealing with the all-time Hollywood blockbuster-master in ole’ Steve, and his right-hand music-man, Williams, writes and orchestrates one of the most iconic musical accompaniments in cinematic history. The action-scenes and stunts in Raiders are breathlessly entertaining, brutal, and well choreographed with the brilliant music. This was the day and age of practical stunts, effects, and dedicated on-location shooting, and Raiders is one of the finest films to have emerged from that era of down-and-dirty filmmaking. Though somehow still conceivable as a “film for all ages” at the time of its release, Raiders is a ferocious movie at times, and that’s what makes it awesome. Blood flows freely and frequently here, and both Jones and his feminine cohort, Ravenwood, murder numerous opponents (namely Nazis) in cold blood and with extreme prejudice. People fucking explode from the wrath of God, for Christ’s sake. Remember folks, this movie was rated PG back in the day.

A basic feature of a badass and Indiana Jones in particular is that he doesn’t give a fuck and yet won’t take shit from other people. He does what he has to in order to get the job done and doesn’t worry about political correctness or whom he might offend or blow up in the process. This is why these movies feel so refreshing to so many older viewers today in comparison to most contemporary mainstream movies, which attempt to tip-toe around their audiences’ feelings, political correctness, and cultural sensitivity, and sanitize everything, no matter how artificially or lazily they attempt to do so. In many ways it’s almost impossible to compare the Spielberg and Lucas of today with whom they were in the 1970s-1980s; they were younger, more rebellious, more intense, and their movies from that era reflect those qualities, none more so than Indiana Jones: A badass who shoots up bad guys with ruthless determination, openly mocks foreign cultures in ways that would shock the Huffington Posts and Vox Medias of today, talks down to and sleeps with his female leads, and always saves the day in the end, albeit in the sloppiest way possible.

To summarize, what’s great about Indiana Jones movies in general and Raiders of the Lost Ark, in particular, are their dedication to the gritty adventure serials from which they drew their inspiration. The only things that differentiate something like Raiders of the Lost Ark from its ancestors are the technological prowess and artistic dedication of its creators, namely its director, cast, and score composer. Lucas and screenwriter Laurence Kasdan got the story and feel right, but everybody else wasn’t afraid to take no prisoners in getting us the rest of the way.

SUMMARY & RECOMMENDATION: Spielberg was at his directorial height with Raiders of the Lost Ark, demonstrating his mastery of blockbuster spectacle, old-school action-adventure thrills, and charismatic, emotional characters. This film is vicious, and yet has real heart. Speaking of those characters, Ford portrays one of modern cinema’s most iconic legends and gave all us dudes something to which we could strive but never attain; Karen Allen ain’t half had either. Williams’ score for Indy is matched only by his soundscapes on Star Wars and Jurassic Park (1993).

— However… Indiana Jones himself may never be entirely human to any of us; some practical effects show their age.