A fellow blogger‘s preliminary review of the pilot episode of The Mandalorian (2019-), as well as discussions of the contemporary Walt Disney era Star Wars (2015, 2016, 2017, 2018, 2019) films by Red Letter Media, prompted this question: Is the Star Wars franchise more “Space Western” or “Space Opera?” If those hybridized genre amalgamations sound weird to you, then I’d wager you’re not alone. As explained in one of my earliest essays on this site, George Lucas’ original Star Wars trilogy (1977, 1980, 1983; produced by Lucasfilm and distributed by 20th Century Fox prior to Lucasfilm’s purchase by Disney in 2012) influences popular cinema to this day:

Star Wars, therefore, remains an enduring cultural icon for both its intellectual property (IP) brand and Hollywood’s unending obsession with big-budget, genre-blending tentpole features that appeal to international audiences of all ages. One can draw a direct line from the success of Star Wars to contemporary superhero franchises, Fast and Furious (2001-) mayhem, and various disaster-porn blockbusters made by Roland Emmerich. They all, in some manner or another, bask in the legacy of the original big-budget Hollywood space opera.

Or is the series’ audiovisual style more in the vein of a space western? What’s the difference between the two definitions? This debate over how to classify the original Hollywood franchise IP in part stems from the movies’ genre-blending character — a little American Western here, an Akira Kurosawa samurai epic there, a Flash Gordon (~1930s-1950s) influence over there — as well as the series’ sheer tonal diversity across different franchise installments. When film enthusiasts describe Star Wars as a “Space Western,” I wager they recall the arid production locations of Tunisia and southern California, as well as the space-cowboy antics of Harrison Ford’s iconic Han Solo. They favor the rugged, anti-hero adventures of the original 1977 Star Wars, Solo (2018), and The Mandalorian over the space-magic and esoteric discussions of The Force in The Empire Strikes Back (1980), The Force Awakens (2015), and The Last Jedi (2019). When cinephiles define Star Wars as a “Space Opera,” they base their love of the franchise around light saber fights, characters moving heavy objects with their mind, and the “duality of man” trope Matthew Modine referenced in Full Metal Jacket (1987), best exemplified by Luke Skywalker’s (Mark Hamill) relationship with Darth Vader (David Prowse/James Earl Jones). 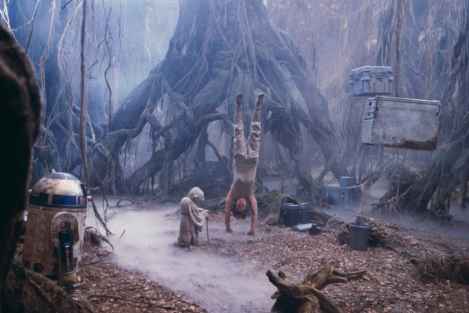 Luke Skywalker (Mark Hamill) practices his control of the Force under the watchful eye of Yoda (Frank Oz) in The Empire Strikes Back (1980).

It’s difficult to discern which genre-hybrid recipe has a greater hold on the franchise. Star Wars‘ original inception, the 1977 film, was clearly dominated by the space western adventurism of Ford’s charming, charismatic rogue and Hamill’s yearning for adventure, with the sprinklings of Force mumbo-jumbo and the Jedi used as background decorations for the burgeoning diegesis. It was not until Irvin Kurshner’s Empire Strikes Back that the philosophy of the Jedi and the Jungian implications of space-magic dominated the series’ narrative, transitioning from world-building material to the foreground of Hamill’s character development. Ever since that first sequel, often considered the single best Star Wars feature and one of the better Hollywood films ever made — i.e. the original blockbuster sequel that bested the original blockbuster in every conceivable aspect — the franchise has whip-lashed between these two flavors to the point of incoherence, not to mention endless fan debate.

My interpretation of this franchise’s dueling identities may explain some of the IP’s enduring legacy: The Star Wars series can pander to suit the popular culture of a given time period as a function of its diverse, at times haphazard combination of genre flavors. That could be the reason why the Star Wars brand remains profitable despite having long lost its uniqueness amidst so many obvious competitors, offshoots, and copycats. Because the franchise is constructed from such disparate genre ingredients as cowboys, fantasy space-magic, aliens, laser-sword battles, dogfights in outer space, rogue gunslingers, and the occasional Satanic military industrial complex, new installments can be mixed and matched from any of these long established traits.

Much of this heterogeneous makeup was evident from Lucas’ 1977 feature, the last (good) film he ever directed. Over the decades, however, different filmmakers and now different studios have amplified different parts of this Tinker Toy set to create vastly different stories. Star Wars only feels tired for its continued appeal to general audiences — I doubt we’ll ever see an adult-oriented, hyper-violent crime drama in space directed by Quentin Tarantino, nor a complicated romantic drama on Coruscant from Gina Prince-Bythewood — but within that broad target demographic known as “the vast majority of the human population,” Star Wars has a formidable tool shed of dynamic genre flavors from which to gross money.

One can argue — as critics have done — that the series, whether in Lucas’ hands or others, hasn’t taken full advantage of this toolbox. Given the aforementioned contrast in styles between various features detailed above, I offer a partial rebuttal, regardless of my assessment of each movie’s individual execution. Let’s summarize all Star Wars live-action media released through 2020, shall we?