The Devil on Your Shoulder, Last Part: Like My Father Before Me

Do not underestimate the powers of the Emperor, or suffer your father’s fate you will… One of the greatest things about Return of the Jedi’s antagonist is how, in a sense, he does win a moral argument: No one is immune to hate and anger, and great, yet terrible power they can provide.

My contemplation on the nature of Jungian shadows, shoulder angels, and facing the temptations of our worst instincts ends with the original Hollywood blockbuster incarnation of negativity: The Return of the Jedi’s (1983) Emperor Palpatine. Arguably the most popular and parodied symbol of evil, authoritarianism, and general villainy in modern pop culture, Ian McDiarmid’s cruel, cackling dictator is now the default meme for anger, viciousness, and “player hatred” on social media.

To summarize the film’s background: After rescuing Han Solo (Harrison Ford) from his former employer and gangster, Jabba the Hutt, Luke (Mark Hamill) and his scrappy rebel friends prepare to assault the Empire’s second Death Star, which is ostensibly not yet operational and whose construction is being personally overseen by the Emperor himself. It’s a high-stakes, all-or-nothing assault on another imperial super-weapon combined with an assassination attempt on the biggest of baddies; but at the last moment, Luke hesitates and abandons his rebel teammates to confront his father, Darth Vader (David Prowse/James Earl Jones), Palpatine’s enforcer.

The reason being is that Luke previously met with his former mentor, Yoda (Frank Oz), fulfilling his promise to return to Yoda after abandoning his training in a failed rescue attempt of Solo, Leia Organa (Carrie Fisher), and company at the end of The Empire Strikes Back (1980). It was during that attempt Luke first learned of his true parentage. Luke is startled to learn, however, that Yoda claims his final rite of passage is not additional Force lessons, but rather confronting his Skywalker legacy in Darth Vader. “One thing remains: Vader. You must confront Vader. Then, only then, a Jedi will you be. And confront him, you will,” says Yoda.

However, Luke has additional motivation for confronting Vader, and by extension, the Emperor, besides proving himself above the evil temptation that turned his father, Anakin Skywalker, into the cruel Darth Vader. He confronts Vader in an attempt to save him, because he believes his father still exists somewhere buried beneath those layers of steel robotics and ironclad hatred. The film doesn’t articulate whether Luke has deduced this from external clues or is merely acting on faith, perhaps sheer, desperate hope that he can save someone who has caused himself and the galaxy so much pain and suffering.

What’s odd, yet fascinating about this meeting between Luke, Vader, and Palpatine is how the former was never established as interested in what the latter was offering: Power through hatred, rage, and domination. Red Letter Media’s Mike Stoklasa notes how Luke never sought power or status, but rather was motivated to join the rebellion against the Empire in Star Wars (1977) through a combination of yearning for adventure and necessity caused by external factors (Luke stumbled onto the droids R2-D2 [Kenny Baker] and C-3PO [Anthony Daniels] by accident, and their pursuit by Imperial forces left his extended family killed and his home destroyed). Star Wars and The Empire Strikes Back never depicted Luke as remotely interested in wealth, status, or militarized leadership; he was at best a talented, spirited fighter in a like-minded guerrilla force that was fighting against oppression, not to seize power for themselves; this is in sharp contrast to how Anakin Skywalker was portrayed in the unpopular prequel films (1999, 2000, 2005). Luke was the ultimate rebel who chose death over joining Vader at the end of Empire.

“Your hate has made you powerful. Now, fulfill your destiny and take your father’s place at my side!”

And yet, Luke nearly succumbs to the Emperor’s — and Vader’s — taunts of hate and rage, all the same. “It is unavoidable. It is your destiny. You, like your father, are now mine,” growls Paplatine. Why? Because sooner or later, negative emotions from “the dark side” catch up with all of us. Hate, anger, wrath, and despair are universal emotions just as love, joy, and kindness are. No one can avoid them or their temptation forever, as Luke realizes once he finally snaps from Vader’s taunting, the latter having deduced Leia’s identity as Luke’s twin sister, threatening to kill or convert her, too. This is a common temptation that can send even the most otherwise good, altruistic people to “the dark side” — defensive wrath at the alleged behest of others. While violent self-defense can be justifiable under extreme circumstances, it is most always considered selfish at its core, whereas lashing out at the defense of one’s friends or family strikes a deeper nerve. Vader knows even better than the Emperor where to hit Luke where it hurts — his friends and adopted family — and sends Luke over the edge. In return, Luke overpowers Vader through his rage and pounds him into submission.

After Palpatine’s gloating response to this outburst, Luke both realizes the truth of the Emperor’s argument — that hate and anger can be powerful allies — as well as the vicious cycle of Anakin’s failure that he is threatening to repeat. His revelation here was prefaced in a vision from the famous “dark side cave” in Empire Strikes Back, wherein Luke has a vision of himself fighting and beheading Vader, only to realize he was fighting himself when the dreamlike Vader’s helmet explodes to reveal Luke’s face.

“… a Jedi’s strength flows from the Force, but beware of the dark side: Anger, fear, aggression, the dark side of the Force are they. Easily they flow, quick to join you in a fight. If once you start down the dark path, forever will it dominate your destiny, consume you it will, as it did Obi-Wan’s apprentice.” — Frank Oz 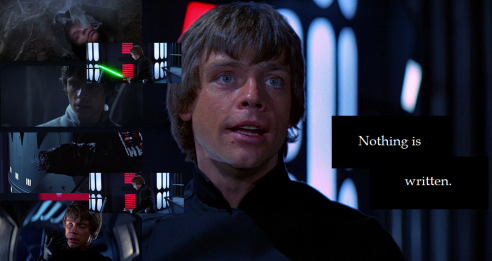 Alec Guinness — Luke, I don’t want to lose you to the Emperor the way I lost Vader. Mark Hamill — You won’t.

Though Vader himself disproves the “forever will it dominate your destiny” part of that monologue by later rescuing Luke from the Emperor’s clutches, Vader’s redemption is clearly an exception to the rule, an exception in no small part due to Luke’s self-sacrifice and refusal to join the dark side no matter the circumstances. Luke acknowledges the Emperor’s point about the power of negative emotion, but rejects it anyway; there’s no end to it besides self-destruction. Luke now realizes, nay, empathizes with his father’s tragic fall and sees all that it has wrought him — nothing but more pain. Luke’s hate would leave him no better, however powerful it may make him, now.

So, he deactivates his lightsaber, tosses it aside, and turns to face the Emperor, the devil on his shoulder, one last time: “Never. I’ll never turn to the dark side. You’ve failed, your highness — I am a Jedi, like my father before me.”