The Devil on Your Shoulder, Part II: Let Fear Find You Again

Top: That’s power you can’t buy… that’s the power of fear. Middle: Ra’s al Ghul (Liam Neeson) teaches Bruce Wayne (Christian Bale, off-screen) to confront his worst fears, which have more to do with his own anger than any external demon or tormentor. Bottom: You have to become a terrible thought… a wraith…

Another series of films that deal with obvious, yet not on-the-nose representations of Jungian shadows or shoulder angels are Christopher Nolan’s Dark Knight (2005, 2008, 2012) franchise. In the broadest terms, the trilogy could be interpreted as a thematic analysis of fear, how it can evolve from an enemy to an ally.

Batman Begins introduces this theme through the series’ protagonist, Bruce Wayne/Batman (Christian Bale). Our main character’s arc is traditional in the most archetypal, monomythic sense, but Nolan’s execution of Wayne’s reluctant acceptance of fear is near perfect. Wayne’s character development is perhaps the strongest element of the film, maturing from a frightened boy scarred by the brutal murder of his parents to an insecure, vengeful young man to a disillusioned vigilante to, quite literally, a dark knight who weaponizes the fear of others.

The most enticing aspect of Nolan’s portrayal of Wayne’s hero’s journey is how he confronts his inner demons, the devil on his shoulder. On the one hand, Wayne almost succumbs to his worst impulses by attempting to murder his parents’ killer, Joe Chill (Richard Brake), for which he is later chided by both his childhood friend, Rachel Dawes (Katie Holmes) and local mafia boss, Carmine Falcone (Tom Wilkinson), the latter who eliminated Chill for his own (legal) reasons.

“You care about justice? Look beyond your own pain, Bruce. This city is rotting. People talk about the depression as if its history, and it’s not. Things are worse than ever down here! Falcone floods our streets with crime and drugs, preying on the desperate, creating new Joe Chills every day. Falcone may not have killed your parents, Bruce, but he’s destroying everything they stood for.”  — Katie Holmes

“People from your world have so much to lose. Now you think because your mommy and your daddy got shot you know about the ugly side of life, but you don’t. You’ve never tasted desperate. You’re Bruce Wayne, the prince of Gotham, you’d have to go a thousand miles to meet someone who didn’t know your name! So don’t come down here with your anger, trying to prove something to yourself. This is a world you don’t understand… and you always fear what you don’t understand.” — Tom Wilkinson

Bruce Wayne’s confrontation with Falcone is one of my favorites in the entire trilogy, not the least because it organically — and presciently — summarizes the franchise’s main themes. In addition to providing critical motivation for Wayne to look past his privilege and selfish desire for revenge, to empathize with and understand the criminality that consumed his family and that still consumes his city, Falcone’s and Dawes’ commentary illustrate how easy it is for us to succumb to our worst instincts when at our lowest point.

Personal suffering provides opportunity for growth and strength through necessity, but it can just as often prime us for a downward spiral powered by grief, anger, and self-pity. Personal hardship and fear can produce the worst in us, such that we become the devil on our shoulders.

Liam Neeson’s mentor to Bruce Wayne offers intriguing advice on how to manipulate these otherwise crippling fears. “To conquer fear, you must become fear; you must bask in the fear of other men…” “Embrace your worst fear — become one with the darkness,” he drawls as he tests Wayne during his final (and brilliantly choreographed!) initiation ceremony into the enigmatic League of Shadows. Though Neeson is later revealed to be the film’s main antagonist in a great third act reversal, his general observations on the nature of fear and our complicated relationship to it are accurate. Only through confrontation, nay acceptance of our fears, may we hope to utilize them. As illustrated in the first part of this essay, one does not defeat the devil on their shoulder through mindless fury nor fearful outbursts, but rather through positive understanding of that devil.

This is later contrasted with Bruce Wayne’s pure disregard of fear in The Dark Knight Rises. After the climatic events of The Dark Knight, in which Wayne banished his greatest foe, The Joker (Heath Ledger), and conquered the blight of organized crime on Gotham, Rises illustrates the devolution of our protagonist’s relationship with fear. Having lost the love of his life (Dawes) to The Joker, as well as his newfound purpose in life as the Batman, Wayne falls past his dysfunctional relationship with fear in Begins to the other extreme: Apathy. Wayne is neither paralyzed by fear in Rises as he was in Begins, nor does he embrace it as a weapon to pursue justice. Having lost all motivation from the fallout of his victory in The Dark Knight, he gives up, altogether.

“Peace has cost you your strength; victory has defeated you!” An astute observation made by Rises‘ primary antagonist, Bane (Tom Hardy), crystallizes the problem of any championship team or successful careerist, right before he slugs an out-of-practice Batman in the face. Grown soft and sluggish from his years of moping, Batman is dispatched in embarrassing, humiliating fashion by an adversary who not only rivals his previous motivational peak, but also his physical one. 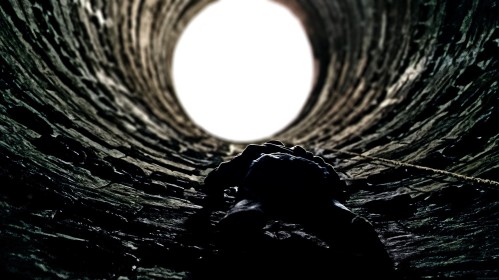 Only a single prisoner, a child born in the pit, ever possessed the strength, determination, and desperation to climb out of the prison. A child born in hell, forged by suffering, hardened by pain. Not a man from privilege.

Wayne is then banished to rot in the same decrepit, remote, underground pit of a prison where Bane spent much of his life, but not before informing Wayne why he didn’t kill him instead:

“You don’t fear death. You welcome it. Your punishment must be more severe… There’s a reason why this prison is the worst hell on earth — Hope. Every man who has rotted here over the centuries has looked up to the light and imagined climbing to freedom. So easy, so simple; and like shipwrecked men turning to sea water from uncontrollable thirst, many have died trying. I learned here that there can be no true despair without hope. So, as I terrorize Gotham, I will feed its people hope to poison their souls. I will let them believe they can survive so that you can watch them clambering over each other to stay in the sun. You can watch me torture an entire city, and when you have truly understood the depth of your failure, we will fulfill Ra’s al Ghul’s destiny: We will destroy Gotham; and then, when it is done and Gotham is… ashes… then you have my permission to die.” — Tom Hardy

As Wayne learns during multiple fruitless attempts to climb out of the treacherous pit (a safety rope attached, no less), he has become something lesser than the devil on his shoulder; he’s become nothing at all, a cynical, suicidal sack of meat waiting for a proper excuse to die, having lost all fear of anything, including death. As stated by an unnamed fellow prisoner in the pit, a certain level of fear is not only natural, but necessary for survival:

Thematically speaking, the only notable event after this exchange is a colony of bats — Bruce’s original childhood phobia — flying past him before he makes the final jump on his climb out of the pit. Sometimes that devil on our shoulders can be a suffocating noose, but other times it can be one hell of a motivation to embrace life, to rage against the dying of the light.