The Devil on Your Shoulder, Part I: You’re Not a Mistake

“These boys come in here, this is how they survive. They gotta fight for life — kill or be killed. People die in there! Your Daddy died in the ring…”

American writer William Faulkner is credited as saying, “The only thing worth writing about is the human heart in conflict with itself.” I first stumbled upon this quote after stumbling upon a wonderful video essay (re: short film) about George R. R. Martin’s use of character mortality to emphasize realism and character growth in his A Song of Ice and Fire series (1996-present). Needless to say, this introspective, emotionally ambiguous tone of Faulkner’s literature has been embraced by David Benioff and D. B. Weiss’ HBO adaptation, Game of Thrones (2011-present), and themes such as these are ones I’ve taken to heart over the past decade as I experienced a sort of personal, psychological, and emotional odyssey all my own.

I detailed important lessons learned from this “odyssey” a few months ago after concluding I am now the happiest I have been in at least ten years. In order to avoid further diatribes on the same philosophical ground, I’d like to explore a different lesson I haven’t so much learned as I have better appreciated during that time. This lesson is related to but separate from the core revelations I detailed in my Psychoanalytic Blog Retrospective: All of us have the potential to be angels just as we have the potential to be monsters. As Jim Anesta and Will Schroder put it, “What matters [are] the decisions we make at the crucial periods and times of our life.”

As always, I will illustrate this lesson with the help of film — several films, in fact. Filmmaking, like any narrative medium, has long been fascinated by this metaphorical “heart of darkness” within humanity; too often, however, I feel this concept is either overly dramatized or morbid (e.g. Apocalypse Now [1979], itself a re-imagining of Joseph Conrad’s Heart of Darkness [1902] novella). The “duality of man” as it’s called, does not and should not have to utilize extreme warfare motifs or quasi-fascist conditioning (e.g. Full Metal Jacket [1987]) to make its point. The conflicts within the heart of every human to be the best or worst versions of themselves should be more relatable.

Enter Creed (2015), a passion project of then burgeoning filmmaker Ryan Coogler and unlikely soft-reboot of the Rocky (1976-2018) franchise. I have never much cared for the cliched boxing series beyond the original’s well tread yet endearing themes of bitterness and resentment at personal underachievement. Though its themes were progressively diluted in its lackluster sequels, the original Rocky’s heart was about a washed up former boxing prospect (Rocky Balboa, a then unknown Sylvester Stallone) proving his personal worth to himself — and, to a lesser extent, his decidedly non-cliched paramour, Talia Shire. That film was about “going the distance,” not a rags-to-riches championship story! 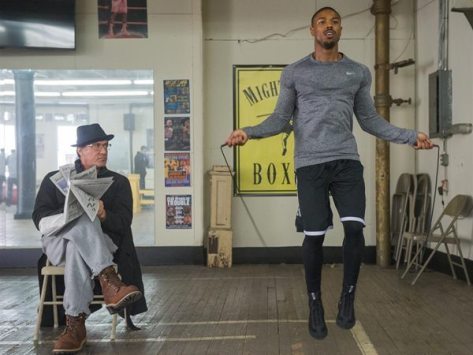 Creed is arguably the first sequel to recapture the original Rocky’s subtext of “going the distance,” of becoming the best version of oneself possible, as opposed to the plethora of superficial, ego-driven sequels.

Like Stallone’s working-class boxer, Adonis “Creed” Johnson (Michael B. Jordan) wrestles with his darker instincts and toxic anxieties before achieving personal growth, before at last going the distance. Instinctual defense mechanisms accumulated from childhood poverty meld with the insecurity of his father’s (Carl Weathers’ Apollo Creed from Rocky I-IV) professional legacy, creating the “worst of both worlds” of a Jungian shadow archetype. Johnson was the product of an extramarital affair between Apollo Creed and an unnamed mother, the latter of whom was likely mired in poverty when Johnson was born. We first encounter Johnson picking fights in youth detention center, after which Creed’s widow, Mary Anne (Phylicia Rashad), tracks him down and offers to take him in — perhaps a function of her guilt or regret over her late husband, who was killed in the ring in Rocky IV.

The rest of the film portrays an awkward inferiority/superiority complex tearing at the foundations of Johnson’s persona: Insecurity and fear of abandonment haunt him from his poverty-stricken youth, while an adolescence and young adulthood of wealth under the shadow of a professional athlete swallow every aspect of his current identity. Mike Stoklasa of Red Letter Media acknowledged a recurring theme of Johnson “being unwanted” in Creed, from his origins to Marry Anne rejecting his aspirations of following in his biological father’s footsteps to his continual mocking by both amateur and professional boxers to his girlfriend, Bianca (Tessa Thompson), literally slamming a door in his face.

This culminates in Johnson’s relationship with an aging, soon to be cancer-stricken Rocky, who unlike Johnson, has achieved (re: earned the hard way) most everything he wanted in life. Like Johnson, however, Rocky has wounds of his own with regards to his deceased wife (Shire), late mentor, Mickey Goldmill (Burgess Meredith), late brother-in-law and best friend, Paulie (Burt Young), and late friend and rival, Apollo Creed (Weathers). Rocky is fulfilled, yet lonely, in other words, and his budding mentor relationship with Johnson is a natural fit. It’s them against the world as Johnson tackles increasingly formidable opponents, to the point where Rocky threatens to stop a title fight to avoid Johnson succumbing to his father’s fate, to which Johnson (now having accepted his late father’s title) objects:

And that’s the kicker. That’s been the devil on Adonis’ shoulder the entire film, before and after his adoption by Mary Anne Creed and his realization of his true legacy — the fear that he meant nothing at all. Regardless of his genetic potential, survival instincts, and shrewd, tactical intellect, Adonis feared his life and all his accomplishments were little more than a meaningless accident, a mistake. Unwanted.

What’s just as interesting is how, prior to this exchange, Johnson got clocked by a savage right hook from defending light heavyweight “Pretty” Ricky Conlan (real-life boxer Anthony Lewis Bellew), which prompted Rocky to consider throwing in the towel. A neat flashback montage sequence intercuts with Adonis’ body crumpling to the mat in slow-motion, recalling the major events of his life witnessed in the film; these include (1) his meeting with Marry Anne in juvenile hall, (2) his rejection and reconciliation with Bianca, (3) Rocky’s cancer diagnosis and treatment, and (4) mysterious archived footage of his father boxing in the ring. After the forth hard-cut, Johnson springs from unconsciousness to his feet “like a man possessed.”

Bring back everything that’s ever hurt you, all the pain you had inside. They don’t know what we’ve been through. You belong here!

Exactly what possessed Adonis to recover is open to interpretation, but my take is that whatever biochemical, spiritual, or metaphorical inspiration came over him, his desire to prove his worth to himself finally overcame his desire to prove that worth to others. Tired of living under the combined shadow of self-doubt and the doubt of others, he decided disproving the former was more feasible — not to mention more satisfying — than the latter. Whether his father’s legacy had anything to do with that final push is up for debate, but the point is that Adonis realized the answer didn’t matter; he didn’t need to “conquer” or defeat the devil on his shoulder to prove he was worthwhile… he just needed to go the distance with it.

I love movies, music, video games, and big, scary creatures.
View all posts by The Celtic Predator »
« ‘Widows’ (2018): When You Overthink Your Movie
The Devil on Your Shoulder, Part II: Let Fear Find You Again »