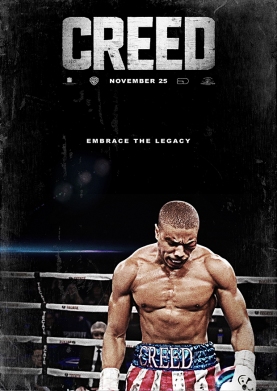 Creed is perhaps the strongest sports film in a decade. It’s a powerful, emotional, at times even melodramatic story that both sports and non-sports fans can enjoy. It’s a spectacular blend of old and new, drawing on Sylvester Stallone’s creative legacy and underappreciated acting talent, Fruitvale Station-star Michael B. Jordan’s athleticism, and Coogler’s energy from behind the camera and within the screenplay. Stallone took a lot of chances lending the responsibility of his most famous character to a young, up-and-coming filmmaker, but then again, what is the Rocky franchise about if not underdogs proving their worth in sweat, tears, and blood?

The Rocky series has always mirrored its lead actor in real-life, showcasing Stallone’s own unlikely breakout in the first film, his ascension to Hollywood stardom and dominance in II and III, his constantly growing ego in IV, his washed up, fading relevance in V, and finally his return to form and old-age wisdom in Balboa. With Creed, both Stallone and Coogler realize that this newest chapter in the Rocky saga is both a continuation of that art-mirroring-life theme, as well as the fact that this is not truly a Rocky movie. It’s a movie about the son of his greatest rival, Apollo Creed. This ain’t “Rocky VII.”

As such, Stallone’s role in this movie is his mentoring of Jordan’s Adonis Johnson (later Adonis Creed), the passing of the torch from older generations to the new, the synergy of senior wisdom and youthful energy. Jordan definitively proves his worth as a Hollywood lead man with grit, athleticism, and a considerable emotional range. His character somehow inherits the full range of underdog archetypes, living the first decade of his life as the impoverished son of a struggling single mom, and soon after a troubled orphan bounced from group-home to foster care and back again. Once he’s taken in by Apollo’s widowed wife, Phylicia Rashad, he graduates to a sheltered and wealthy lifestyle, but is now disregarded by his boxing peers as a coddled, privileged prince struggling to escape the shadow of his diseased father.

The running theme of this film, much like the first Rocky, is rejection and loneliness. Adonis is continually shut out by others and rejected by prospective mentors at every turn; likewise, Rocky lives alone in his Philly household where he raised his son with Adrian before she and now her brother, Paulie, passed. He runs Adrian’s restaurant in relative solitude with his now grown son having moved to Canada in the years since Balboa, struggling to come to grips with his own mortality and troubled legacy. Sooner or later Adonis seeks out Balboa, and what happens afterward is a newfound underdog triumph for the modern age.

Jordan and Stallone’s chemistry is excellent. They feed off each other’s energy and pain, forming a connection that is the beating heart of this emotional story. Stallone in particular is a standout amongst this great cast, portraying his finest acting since the original Rocky and First Blood (1982). His portrayal of a lonely, aging champ is heartfelt and incredibly sad, yet still full of that life and cheeky humor that made Stallone a household name. Jordan is a fully formed protagonist, demonstrating a gigantic yet realistic and relatable arc that sees him confront each and every one of his demons. His performances in the boxing matches are incredible, full of physicality and raw passion, while his reactions toward his supporting cast feed into his larger persona with every scene.

Much of the setup for Jordan’s arc and Stallone’s fine acting are, of course, Coogler’s smart script and energetic direction. Creed pushes the acceptably paced running time of 133 minutes, but concludes at the perfect moment and strides at a confident, brisk pace. Long takes and grimy shots of blood, sweat, saliva, water, and Philadelphia street life give this film a sense of life and relatability most sports films sorely lack; Philly seems to breath and possess a beating heart in every transition shot and training montage, becoming as alive as its passionate characters whenever Ludwig Goransson’s masterful score swells. If Coogler doesn’t get dual Oscar nods for Best Original Screenplay and Directing, I’ll punch somebody.

Was there anything I didn’t like about this movie? As a matter of fact, there was! Adonis’ motivations for pursuing a career in boxing in particular are never entirely clear, though his desire to escape his paternal legacy and that classic masculine chip-on-the-shoulder complex fulfill most of the narrative’s logic gaps. Additionally, Tessa Thompson’s love interest is altogether unnecessary to the story besides filling out the cast with some estrogen, providing little perception into Jordan’s character until she starts to push him away. She was a wasted opportunity and probably could’ve stood to have her character written out.

Embrace who you were born to be.

Still, Creed remains a triumph and one of 2015’s best. Its incredible heart, musical energy, and potent physicality overcome any cracks in the story’s premise or mismanaged romantic sideplot. I had an absolute blast with this film, and left the theatre with an elation and optimistic swagger than hasn’t faded in the week since. Coogler’s rapidly rising star is yet another bullet point on the rapidly growing argument for why up-and-coming indie directors should be given the reins of aging, ailing franchises (Marc Webb’s Amazing Spider-Man [2012, 2014] debacles notwithstanding), along with Colin Trevorrow’s Jurassic World and Gareth Edward’s Godzilla (2014). The man has breathed new life into a series’ seventh entry, for God’s sake, and has artistically eclipsed every previous installment, including the original! Yes, you heard me right: Creed is an absolute knockout. Go see it right away.

SUMMARY & RECOMMENDATION: Coogler’s screenplay respects the central relationship between Jordan and Stallone above all else, and establishes meaningful arcs for both of them. This is the best story of all possible stories for this franchise, cynicism be damned. Creed also sports some of the 2010’s most delicious long-takes and the grittiest cinematography since last year’s Whiplash (2014). Jordan and Stallone are one of the best on-screen pairings in years.

— However… Tessa Thompson’s a fine actress and works well with both Jordan and Stallone, but she’s underused and her efforts in the story are ultimately expendable. Jordan’s early fascination with boxing and his father’s legacy are muddled at best.