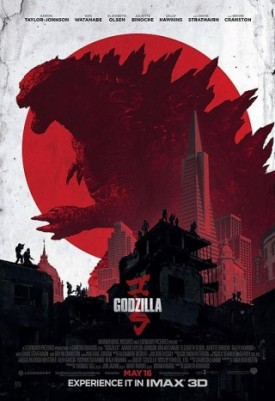 As many of you know, it is virtually impossible to discuss this second, most recent American remake of the iconic Japanese monster, Gojira (Godzilla), without drawing comparisons to the universally rejected Roland Emmerich version done 16 years ago in 1998. For better or worse, Emmerich’s Godzilla (1998) is the benchmark for how the general public, at least in the West, views this new film by Monsters (2010)-director Gareth Edwards, and the reason for this is that nobody seems able to come to a proper consensus on what a “true” Godzilla film should  be. That’s because the big guy has been around for so long (since 1954!) and has endured multiple decades-long series of every conceivable tone and flavor that the idea of what a Godzilla movie “should be” is murky at best, and a complete enigma at worst. The only thing Godzilla fans can agree on is that a G-Man film has to feature atomic breath and Godzilla has to be indestructible to at least conventional military weaponry.

Violations of the latter two points are why most childhood Godzilla die-hards rejected Emmerich’s take on the franchise label, but the fact the 1998 film was just not a well put together movie any way you looked at it, was why the rest of us rejected it as well. Plagued by poor casting, bad acting, and goofy dialogue that clashed with the film’s intentionally dark, somber tone, along with some questionable special FX, Godzilla (1998) was a poor man’s mishmash of Jurassic Park (1993) and Emmerich’s earlier blockbuster disaster-movie, Independence Day (1998). The film was an obvious attempt to piggyback on the popularity of both disaster films and dinosaurs, which were hot in the late ’90’s, and to capitalize further on the brand name of Godzilla, a franchise that has historically had a long and popular following in the US. 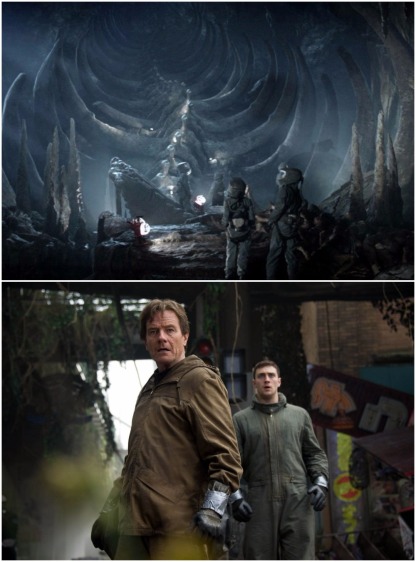 Top: Ken Watanabe and Sally Hawkins explore the remnants of a Godzlla conspecific skeleton early in the film. Bottom: Bryan Cranston and Aaron Taylor-Johnson spot something fishy off the coast of Janjira, Japan.

Despite how much things have changed since 1998, the more they stay the same. The biggest problem with Gareth Edwards’ Godzilla (at least in terms of its commercial success) is the same problem that plagued Emmerich’s film, believe it or not, if only to a significantly lesser degree. Most people’s complaints with Godzilla (2014) are, once again, that it doesn’t conform to the shape and style of the Godzilla films they like the most, whether it be the dark, serious, and somber original (1954), the upbeat, pulpy, comic book-esque Showa series that immediately followed (1954-1975), the stylish, modern Millennium series (1999-2004), or the middle-of-the-road Heisei series (1984-1995) that was somewhere in between.

Greenhorn director Edwards attempts to balance this dilemma by taking a little bit from all the above. He holds back on showing the titular monster until 60 minutes into the movie, the tone of the film is serious and foreboding, and Godzilla himself regains some of the allegorical symbolism that has largely abandoned him throughout all the movies following the original. However, the G-Man also fights not one, but two, other monsters, and the film builds to the final showdown like a heavy-weight Ultimate Fighting Championship the way the more lighthearted films were structured.

However, the film’s biggest problem (at least from an audience’s acceptance standpoint) seems to be that Godzilla has been relegated to a supporting role in his own eponymous movie. Aside from a brief allusion to another member of the “Godzilla species” with a cool excavated skeleton in the prologue, Godzilla is not the monster who drives the plot, at least not for the first two thirds of the film. Those roles go to the MUTOs, giant insectoid foes that wreak havoc from Japan all the way to San Francisco, and in doing so set all the character drama in motion. This is the first area where Godzilla (2014) comparisons to other famous creature features that also hold back on revealing their monsters falls flat. In films like King Kong (1933, 2005), Jurassic Park (1993), and particularly Jaws (1975), what drives the plot for those narratives is the presence of the monsters, either behind-the-scenes or through cryptic camerawork. The G-Man does not do this in Edwards’ movie and this is the main reason why the film doesn’t satisfy many people. Godzilla is less the primary focus and more the piece de resistance at the end of a long, four-course meal.

Edwards seems stuck between the hesitancy to reveal the titular monster like in the standalone 1954 classic, but at same time there are other monsters to fight and obligatory Hollywood schmaltz to which he must pay lip service; the film stands in an odd middle ground of sorts, trying to be a franchise reboot and a monster vs. monster sequel all at once.

That being said, the worst complaints regard Godzilla’s cast, and this is where criticism is justified. Other than a predictably top-notch performance from Bryan Cranston (hot off the Breaking Bad [2008-2013] train), everyone else is generic and boring. Aaron Taylor-Johnson’s lead is ho-hum and Elizabeth Olsen’s female costar does absolutely nothing the entire film. Scientist/kaiju-expert characters Ken Watanabe and Sally Hawkins serve as the obligatory expository-dialogue-spouting humans, but grow uninteresting by film’s end. As a point of comparison, Steven Spielberg and Peter Jackson earned their suspense and prolonged buildup in their classic movies with multi-dimensional, interesting characters. Edwards’ movie lacks that and is therefore an inferior film compared to the likes of a Jaws, Jurassic Park, or King Kong. Cranston gives it his all, but as most of you are now aware, he’s whisked away barely forty minutes into the film.

With all said, Godzilla (2014) is far from the shallow, lazy cash-grab of 1998. Cranston’s limited screentime was a sleazy move, I’ll agree, but there’s still plenty of good filmmaking to be had here. If the screenplay itself is oftentimes frustrating and unsure of itself, Edwards’ amazing camerawork and jaw-dropping spectacle save the day. Despite Godzilla’s delayed appearance and limited impact, every scene with the MUTO’s and the sheer scale of the destruction at hand is characteristic of the best the disaster and kaiju subgenres have to offer. It is in the cinematography department that Edwards most effectively channels his inner Spielbergian influences, with the monsters given massive scale and the physically minuscule human perspective never forgotten. This 2014 reboot does a far better job of conveying the awe, fear, and mayhem of a massive kaiju attack than either Pacific Rim (2013) or Cloverfield (2007), or any other Westernized monster flick for that matter. Edwards’ faithfulness to the anthropocentric perspective at all times gives the adventure a sense of realism and relatibility that most of the characters themselves lack.

Ironically, the part of the film most touted as foolproof before its release, the characterizations, remains Godzilla’s (2014) biggest error. However much we may not like it that Godzilla was not the main player in his own film, I don’t think it is appropriate to derail the movie based on our preconceptions of the big guy’s influence. Where I believe criticism is justified is in the vanilla characterizations and forgettable dialogue. For a movie this light on monster-battles, the human drama needs to be more up to the task of carrying the film to the money shots.

My personal favorite moment of the film, when Godzilla unleashes the beast within: ATOMIC BREATH!

In the end, it’s not a truly magnificent rebirth of the iconic Japanese monster we all know and love, and really the only kaiju the general public has ever heard of, but as a re-imagining of the G-Man for the 21st century, it works just fine.

— However… the rest of the cast are flat-lined. Taylor-Johnson and Olsen are easy on the eyes but don’t do much from a personable standpoint. Watanabe gives one of the worst performances of his career.

? I wanna build a giant Lego city and then smash it.

I love movies, music, video games, and big, scary creatures.
View all posts by The Celtic Predator »
« ‘The Winter Soldier’ (2014): The Russo Bros. Class Up Marvel
‘Days of Future Past’ (2014): Characters Before Spectacle »