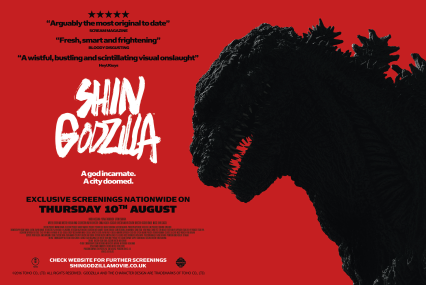 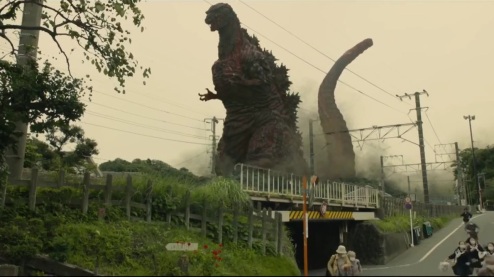 The final life stage of this latest Godzilla stomps the outskirts of Tokyo in a shot that recalls the original Gojira (1954).

Godzilla is such a recognizable and profitable IP, in fact, that the character has been featured in mainstream blockbusters in multiple industries, from its native Toho Pictures in Japan (31 live-action titles as of 2020) to its third big-budget feature in Hollywood (Godzilla [1998], Godzilla [2014], King of the Monsters [2019], plus a fourth title, Godzilla vs. King Kong, to be released in Q4 of 2020). The American takes on The Lizard King are hit or miss, taking advantage of ludicrous (Godzilla-sized?) major studio budgets and copious computer generated imagery (CGI) to portray the titanic action of giant monster fights; Toho Pictures’ homegrown Godzilla productions, on the other hand, are inconsistent for different reasons, understanding the sociopolitical themes that gave rise to the monster (e.g. the fear of nuclear fallout, Imperial Japan’s legacy, US military aggression, etc.) but are prone to limited special FX and cornball acting.

Combining most of the best features from both sources of Godzilla’s modern pop culture footprint is Hideaki Anno and Shinji Higuchi’s Shin Godzilla, the latest Toho G-Man feature and the first of the nation’s so-called Reiwa period. Writer-director Anno and co-director Higuchi both hail from animation backgrounds, and that stylized, borderline experimental aesthetic dominates the portrayal of the film’s titular monster, as well as the dramatic, off-key horror tone its story generates as a function of its weird special FX and even weirder approach to dramatic staging. Put another way, Shin Godzilla (henceforth, Shin) is a contemporary Godzilla picture meant for diehard fans, not a mainstream crowdpleaser for general audiences interested in another kaiju-vs-kaiju CGI extravaganza a la King of the Monsters, Pacific Rim (2013), or Skull Island (2017). How the filmmakers combine the franchise’s traditional monster imagery with complex political commentary on both Japanese and international government bureaucracy is the most impressive aspect of this feature, and is what makes the film truly special.

Taking direct inspiration from the 2011 Tōhoku Earthquake and tsunami, which resulted in the Fukushima Daiichi nuclear meltdown, more so than the World War II bombings of Hiroshima and Nagasaki, Shin’s tone feels relevant to most any contemporary natural disaster imaginable, including the ongoing COVID-19 pandemic. The bulk of the film concerns numerous government officials running in circles, sitting in front of laptops, or yelling at each other in conference rooms — not exactly the most cinematic of situations, mind you — as they decide how best to respond to an inexplicable giant monster that emerges from the sea and wreaks havoc across the Tokyo metro area. Editing and framing during these sequences are sharp and precise, matching the frantic rhythm of the dialogue as well as the discombobulated acting of the cast. Extreme close-ups are common throughout, as are actors spiking the camera during instances of revelation, shock, or joy. Believe it or not, these procedural cinematographic flairs are what make Shin worth watching, more so than the special FX or the sequences of urban destruction. The film’s dramatic center is based on the nervous breakdown and eventual triumph of public servants hacking through layers of bureaucratic red tape as their country literally crumbles before their eyes.

Speaking of those set-pieces where Godzilla stomps through Tokyo, they maintain plenty of tension as the titular monster wades through skyscrapers like an unstoppable force. Their impact is a function of the human drama behind the scenes rather than the other way around, but together these sequences keep viewers invested in the narrative’s outcome. The only problem with Godzilla’s rampages are the FX used to generate them, which are serviceable with respect to the urban environments but lackluster with regards to the monster, himself. I think Godzilla’s forms (the creature metamorphoses through various life stages throughout the film) would have been better portrayed with practical FX, miniatures, and pyrotechnics, as opposed to the composite shots, blue-screen, and CGI used here. The film maintains narrative tension despite these problems, but its FX are not seamless by a long shot.

Numerous government actors crowd around each other’s laptops as they struggle to keep their national infrastructure from collapsing.

Godzilla is a product of natural disaster beset upon Japan rather than a generic CGI monster for Hollywood to play with. That being said, the universality of Godzilla’s ability to represent the horror of destruction anywhere is why the character remains timeless. As long as humans make films, there will be natural tragedies from extreme weather events to earthquakes to pandemics to nuclear fallout for The Lizard King to represent, and that is what filmmakers Hideaki Anno and Shinji Higuchi have recreated in Shin Godzilla. Inconsistent special FX are not enough to undo the tense drama of government institutions falling apart and rallying before our eyes, executed with brilliant editing, staging, and an outside-the-box directorial approach. This latest Toho Pictures incarnation of the recognizable beast reminds audiences of the straightforward dread of watching a force of nature destroy our society without remorse, malevolence, or pity. Therefore, Shin Godzilla succeeds on its terms.

SUMMARY & RECOMMENDATION: More horrific than most horror films, more intense than most thrillers, and more dramatic than most courtroom procedurals, Shin Godzilla is an impressive creature-feature for the modern age, as applicable to the Fukushima incident as it is to the coronavirus outbreak of 2019-2020, as well as whatever disaster occurs next year. The film’s portrayal of government dysfunction succeeds due to its unconventional narrative structure and eclectic cinematographic style

— However… Shin Godzilla’s monster FX can’t hold a candle to even mediocre Hollywood monster movies. Its CGI is a consistent weakness, rather than a selling point, of the story.

? The idea of a Japanese-American who learned English as a second language becoming president of the United States is amusing, but then nobody saw Barack Obama or Donald Trump’s presidencies coming, either.