‘The Force Awakens’ (2015): A Near Perfect Throwback Blockbuster 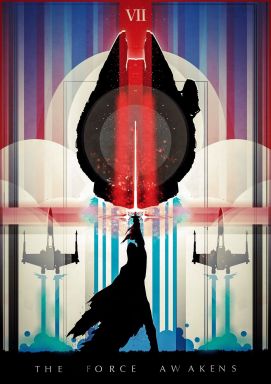 Star Wars is the biggest movie franchise of all time. No other blockbuster has come close to replicating the massive, irreversible influence of the definitive space-opera of all time. Unlike westerns, high-concept science-fiction, or even comic book-movies, Star Wars is a multigenerational property. Not only is Star Wars invaluable to Hollywood, it is so beloved and universally appealing to the general populace that its pop culture fandom has achieved a level of religious fervor few other properties in the popular arts have ever achieved. 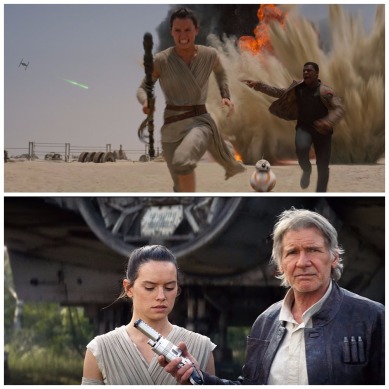 Put another way, if you don’t understand or have not seen Star Wars, you don’t understand movies, and you certainly can’t comprehend American pop culture. It’s as simple as that. Thus, the day The Phantom Menace (1999) was released on May 19th, almost seventeen years ago, as the first part of George Lucas’ long awaited prequel trilogy to the original beloved saga… that was the day when hope died. Never again would any film release be so widely anticipated, nor a bigger disappointment, as the independent Milwaukee film company, Red Letter Media, explained in excruciating detail in their now famous Plinkett-review series.

What The Phantom Menace, Attack of the Clones (2002), and Revenge of the Sith (2005) revealed was just how flawed Lucas’ decision-making process had become (or perhaps had always been), and that the franchise was in dire need of fresh blood. Entire Walt Disney and their purchase of Lucasfilm in 2012 for $4 billion, and with it the rights to all future Star Wars properties. Right away, Disney made clear their intent to revive the series which Lucas swore had been put to rest nearly seven years prior, and thus Star Wars entered the modern age of megafranchises.

While it’s arguable whether The Force Awakens‘ hype rivaled that of the rabid anticipation of The Phantom Menace, the Force indeed awakened general audiences’ thirst for more Star Wars, specifically good Star Wars. Massive excitement was tempered by vague doubt and fearful reminders of the dashed hopes of Lucas’ Prequel trilogy, a trilogy which had turned the term “prequel” into a dirty word.

Before I stall further in this review, let me assure readers that The Force Awakens is the film we have been waiting for. It is the first good Star Wars movie in over thirty years, or as I would prefer to put it, the first true Star Wars film in decades. It’s far from the year’s best, but that’s beside the point. Fans have long deified this franchise as some innovative, groundbreaking story that is untouchable by most films ever made. While the first Star Wars (1977) is indeed a near perfect blockbuster, and The Empire Strikes Back (1980) is one of the better films ever produced, the series’ formula is in fact one of the most basic storytelling techniques known to man. What Star Wars is, are fun, well executed space adventures with likable characters and universal humanist themes. It’s basically a modern update of classical Flash Gordon serials (circa 1930s-1940s).

As such, the primary goals of this fourth Star Wars film were to recapture that original feeling of adventure and relatability the OT possessed and the Prequels forsook, as well as pass on the thematic generational torch from older characters to the new. That’s it. JJ Abrams, Lawrence Kadan, and producer Kathleen Kennedy have achieved that goal with flying colors. There was no way this film could not be self-reflexive and self-aware even if it wanted to — but the difference is that this time around, the powers that be were able to acknowledge the franchise’s cultural baggage without forgetting to make a good movie. If you really want a “different type of Star Wars,” go watch the Prequels. The creator of Star Wars himself swears by them.

In any case, TFA is yet another entertaining, emotional space-adventure with likable, deep characters. It is therefore a screaming success for the franchise and for fans worldwide. It nails the basics of monomythic storytelling and achieves the raw, used aesthetic of Star Wars‘ science-fantasy tone. What is there to complain about?

In the interest of objectivity, perhaps the following: TFA is so breathlessly paced and covers so much narrative history that the story forgets to pause at opportune moments; Captain Phasma (Game of Thrones‘ [2011-2019] Gwendoline Christie) is little more than a joke of a glorified cameo; the Starkiller Base (a.k.a. Death Star 3.0) is a forgettable doomsday weapon. There, those are the weaknesses. 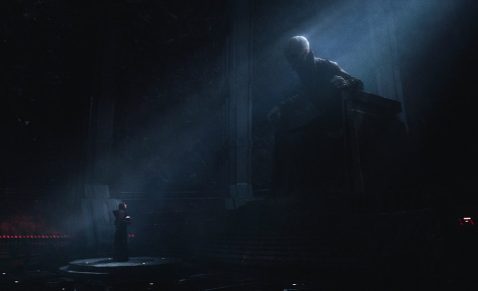 As per what the film gets so damned right, TFA is so action-packed and looks so good that it achieves a new benchmark for balanced special FX. Abrams and company did indeed make good on their promise to emphasize the physicality of practical FX, and the end results are glorious. Creature models, alien costumes, and props look amazing and meld perfectly with great location-shooting. The CGI that is used is well executed and puts the blue-screen overuse from George’s Prequel implosions to shame. This is the best-looking film in the series.

More importantly, TFA introduces fun, likable, and relatable new characters and melds them with the returning castmembers. John Boyega, Daisy Ridley, and Adam Driver are standouts as Finn, a renegade Stormtrooper, Rey, a mysterious orphan and scavenger, and Kylo Ren, son of Han Solo and General Leia and enforcer of The First Order (a remnant of the evil Empire). Each of these characters are not only well written and multilayered, but they are all different from one another, and speak to the universality of Star Wars’ monomythic appeal.

Boyega’s Finn is perhaps the most relatable of the bunch, a beaten down soldier who abandons his post out of desperation and fear. Ridley’s protagonist, Rey, is cheerful, spunky, and yet riddled with insecurity regarding her home and mysterious familial origins. She’s the inverse of Finn, keeping her emotions buried through a performance that is guarded and believable. Driver’s Kylo Ren is a vicious, unwieldy force of youthful angst, a wrathful, intimidating villain whose temper tantrums feel genuine without overacting. He is both intimidating and cowardly, an experienced commander yet also a petulant boy — everything we did NOT get in Hayden Christensen’s Anakin Skywalker!

Han Solo is a major player in this film, more so than he was in Return of the Jedi even, and represents a true return to form for Harrison Ford. Whether you have an emotional connection to previous Star Wars films or not, though, his relationship with Driver’s Ren is perhaps the strongest narrative element of the film, ending in a tragic, well staged death sequence that doubles as a wonderful sendoff for one of the most recognizable characters in cinema.

What else is there to say? The Force Awakens is not a perfect movie or a perfect blockbuster, but it is a very, very good blockbuster movie. The film more or less represents everything Lawrence Kasdan wanted to do in Return of the Jedi, but couldn’t because of Jorge Lucas’ inconsistent creative interference. Under the direction of fresh creative blood, The Force Awakens is a step or two above that final OT film. It’s everything I hoped it would be.

This is not the Star Wars movie we deserved, but it is the Star Wars movie we needed. It looks and feels like a long time ago, in a galaxy far, far away; it has that rawness to it, that aged futuristic feel. And most importantly, it gives us new heroes that are fun, likable, and feel like real people. It even brings back old characters to pass this thematic torch from the previous generation to the new. J.J. Abrams, Kathleen Kennedy, and Lawrence Kasdan have done it: They’ve brought us an action-packed space-opera with energy, emotion, and drama. The Force is strong with this one.

SUMMARY & RECOMMENDATION: Abrams successfully recalls Star Wars‘ used-future aesthetic and executes awesome, powerful, raw action-scenes. Within these perilous battles are characters we care about and in which we see ourselves. Ridley, Boyega, and Driver are stars in the making, and Ford helps show them how to be. The story is bursting with thematic potency. Neat concepts like a riot control Stormtrooper, a non-Jedi wielding a lightsaber, and Force-freezing laser bolts are all just… well, really cool! And new!

— However… The Force Awakens is almost too brisk and action-packed. The Starkiller Base could have been jettisoned, altogether. John Williams’ score is underwhelming .

? So would people agree they made a Star Wars movie about as good as JJ Abrams’ Star Trek (2009)?

I love movies, music, video games, and big, scary creatures.
View all posts by The Celtic Predator »
« ‘Spotlight’ (2015): The Most Boring Dramatization Ever
‘The Hateful Eight’ (2015): The Goriest Stage Play Ever »

35 thoughts on “‘The Force Awakens’ (2015): A Near Perfect Throwback Blockbuster”