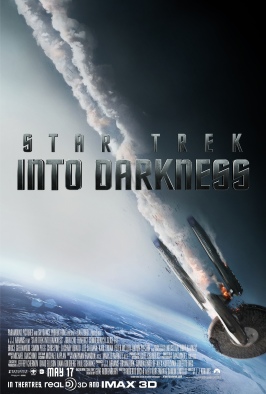 As a fan of the shocking 2009 Star Trek-reboot, I have been itching for another Trek-movie for years. The fact that Star Trek feels fresh, relevant, and exhilarating in this day and age is a feat of wonder. Both the lackluster, boring Next Generation (TNG) films (1994, 1996, 1998, 2002) and the forgettable cancelled Enterprise (2001-2005) series made it painfully clear the franchise was in dire need of either drastic overhaul or euthanasia. Given the results as of 2005, I would have recommended the latter over the former. Thank goodness I was not in charge of the Star Trek universe. Regardless of your feelings concerning the turning of Trek into action schlock (or put another way, yet another Star Wars-clone), it’s hard to argue with the overwhelming results: Star Trek is relevant again.

Where does the reborn sci-fi franchise go from here? The new Trek universe doesn’t have a world of pressure on its shoulders, as it’s not a multi-billion dollar investment like Star Wars or the Marvel Cinematic Universe. And yet, given Star Trek’s mammoth legacy in the genre, it still has, and always will have, high standards to live up to. Into Darkness (ID) continues the high-octane action and energetic, youthful characterizations begun in the 2009 reboot. The franchise feels as fresh as the series’ resuscitation four years ago, and while ID does not necessarily improve upon the new formula, it makes few mistakes, and is, like the ’09 reboot, breathlessly entertaining from start to finish.

All the major players from 2009 return, and all principle castmembers are given the appropriate amount of screen-time and moments to shine in this interstellar adventure. The film’s biggest selling point remains the chemistry between Chris Pine and Zachary Quinto. Their opposite characters generate almost constant dry humor. For that matter, the chemistry among the entire Enterprise crew is strong, with everyone from Simon Pegg to Zoe Saldana to Karl Urban to John Cho showcasing distinct personalities that flesh out the exciting story. The supporting roles of Bruce Greenwood (Admiral Pike) and Peter Weller (Commander-in-chief Alexander Marcus) are strong as well, although it’s a shame neither has much face-time.

The biggest new addition to the rebooted franchise is a the suave, intimidating Benedict Cumberbatch. The one area where ID bests ST ’09 is in the villain department. Cumberbatch’s Khan Nunien Singh injects the series with yet another action-packed shot of adrenaline. His introductory scene on Kronos is the best and most exciting sequence in the whole movie (which is saying something), as it combines tense dialogue with vicious firefights and close-quarters-combat. More generally, his frequent taunts and manipulations of Pine’s Kirk are entertaining and dramatic, adding invaluable emotional tension behind the gritty action sequences. This new Trek series has already set a high standard of imposing villains that you love to hate, and what a better way to celebrate great Trek-villains than with the one and only Khan.

As far as pacing goes, ID is fast-paced while always knowing the right moments to slow down before a real cinematic punch to the throat. It’s an effective roller coaster that hits nearly all the right highs and lows at all the right times. The pacing feels somewhat less frantic than in ST ’09, with ship-to-ship space-battles playing out like a tactical game of RISK or a turn-based strategy game. It’s a different kind of excitement in these parts, and it’s a showcase that old-school Trek fans should appreciate. Don’t worry though, newcomers, much of the action is still breathless and edge-of-your-seat. It’s a good mix, overall. 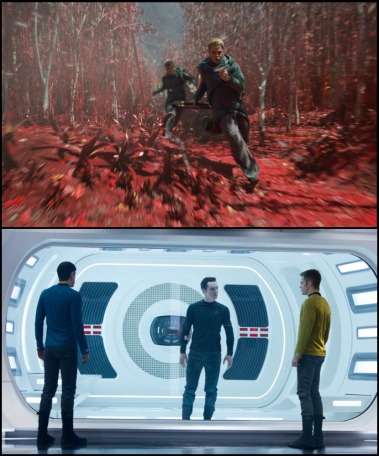 Top: The new Star Trek starts off with a bang in this fast-paced chase scene, intercut with a sequence inside a volcano. Bottom: Benedict Cumberbatch delivers as an excellent villain for the rebooted franchise.

As for the film’s downsides, its dialogue and character-moments can be cornball at times. The latest Star Trek, like most Trek movies, walks a fine line between emotionally resonant and cheesy, and it occasionally falls off that tightrope. It’s something that comes with the territory.

Another significant problem is the ending. While I won’t go into gory details here, ID’s climax is a huge copout. The penultimate scene teases us with a daring, ballsy ending. The implied conclusion is poetic and would have made for a fine climax to one of the strongest films of the summer, and yet within as little as ten minutes, the movie backtracks and undoes all the tragic finale it falsely advertised. The final result is unsatisfying, making one ponder if the powers that be pushed for a “safer,” more crowd-friendly, cliched happy ending.

All in all, Star Trek: Into Darkness is another success for Paramount and the Trek-cannon in general. It doesn’t reinvent the wheel in light of the ’09 reboot, and its level of cheesiness can be distracting at times, as is its copout ending; overall, though, it’s so reliably entertaining and well made that I can’t not recommend it. You go, J. J. Abrams. Best of luck with Star Wars.

SUMMARY & RECOMMENDATION: Star Trek: Into Darkness is more fun, high-octane rebooting of the original classic series. If you’re an old-school Trek fan who can’t move on from the 1960s, this movie, like it’s predecessor, probably still isn’t for you. I loved the cast, thought the action and FX were great, and enjoyed Benedict Cumberbatch’s villain, so I was on board. I don’t see this film as a dip in quality from the 2009 reboot like so many others do.

— However… some of the corny dialogue distracts from the adventure at hand. The script chickens out big-time in the ending. Super blood.

? MY NAME IS KHAN — applies in both the East and the West!