The Kids Are Alright: The 10 Most Effective Remakes, Reboots, and Re-Imaginings in Hollywood

The Blurring Effect on Pop Culture: The further back in time one goes, the sharper more titles will be to the masses because there was less crap to sort through back then. — Mike Stoklasa

Every cinephile has opinions on film remakes, franchise reboots, or brand-name title “re-imaginings,” or however/whatever you define them. Remakes have become so prevalent in today’s saturated pop culture markets because film industries like Hollywood recognize the marketability, brand recognition, and overall financial security that an already established title has with the masses. Remakes of classic titles or reboots of popular franchises have become so common nowadays that even most general audiences (i.e. “non-cinephiles”) are starting to catch on and appreciate the sheer number of recycled ideas, characters, and premises that are going into and out of Hollywood every year.

People often lament that Hollywood “has no originality anymore” and that “everybody’s copying each other” and that big American movie studios keep “ripping off way better foreign films.” Well, all that is true to an extent, but those same complainers have to realize that filmmakers drawing ideas from one another is a trend as old as art itself. Forget film’s history —- artists ripping off concepts from their peers or rivals is something inherent and natural, if not essential, to human creativity; without it, art of all forms would die.

I understand that most people, particularly hard-nosed film buffs, feel that things have gone too far to one extreme and that studios, especially those in Hollywood, should stop trying to cash in on poor, lazily produced rehashes of childhood nostalgia, and again I agree with those sentiments to a certain degree. But the thing we have to understand is that corporate entities have been doing this since the beginning of time — capitalist enterprises are always looking for new revenue streams wherever they can find it, regardless of how lowbrow they have to stoop — and moreover, this trend is in no way unique to or even most extreme in Hollywood relative to other film cultures.

This post isn’t meant to defend or condemn film remakes so much as it is a reality check for those who endlessly derail them. As such, I’m not going to meticulously discuss why certain remakes fail or succeed, or the specifics as to why certain films should be remade and others left alone (that’s a list for another time), but rather I want to list some of the notable success stories for which I am thankful, and for which I think everyone else should be too.

Here are my picks:

10.) 3:10 to Yuma (2007) —- [Remake of 3:10 to Yuma (1957)]; This 2007 update of the 1957 adaptation of the original short story by Elmore Leonard is one in a long, long line of Western remakes that have stretched across decades, industries, and national boundaries. Given that the western has been one of the longest running and most critically acclaimed film genres, it seems natural that artists would re-imagine similar to borderline identical cinematic tales differing only in cultural and geographic context, from the United States (e.g. The Stagecoach [1939]) to Japan (e.g. Seven Samurai [1954])  to Italy (e.g. The Good, the Bad, and the Ugly [1966]) to India (e.g. Sholay [1975]) to the United States again (e.g Unforgiven [1992]). Despite being financially toxic nowadays after a good 40-year run of mainstream cultural relevancy, occasional great modern Westerns still creep up from time to time.

James Mangold’s 3:10 to Yuma is one of those great films. It breaks down, criticizes, and also empathizes with the Western’s inherent search for and championing of classic, rugged masculinity and all the historical baggage that comes with it. Christian Bale plays arguably his most sympathetic role to date against Russell Crowe’s manipulative antagonist. Mangold also directs some of the greatest western shootouts in years. Not bad for a remake that was a box office bust that hardly anyone saw.

9.) The Fly (1986) —- [Remake of The Fly (1958)]; I’ll be honest with this one — I haven’t seen the original Fly by Kurt Neumann, but you’ll forgive me if I don’t think it necessary to confirm that David Cronenberg’s 1986 update is a fantastic film. Besides featuring Jeff Goldblum’s best performance and some seriously awesome (as in hot) sexual innuendo, the film boasts some incredible 1980s practical effects like The Thing before it and James Cameron’s Aliens (1986) released that same year, as well as Cronenberg’s wacky body-horror tone.

8.) Invasion of the Body-Snatchers (1978) —- [Remake of Invasion of the Body-Snatchers (1956)]; Widely considered one of the greatest remakes of all time by both critics and science-fiction aficionados alike, this first remake (out of three total, to date) of the original Communism/McCarthyism-paranoia classic is a true sci-fi cinema for the thinking movie-goer. It’s focus on narrative-driven action and complicated sociopolitical themes intermixed with pulpy speculative science make it a relative rarity in today’s space-opera obsessed culture.

7.) The Girl with the Dragon Tattoo (2011) —- [Remake of The Girl with the Dragon Tattoo (2009)] —- This film assuaged my disappointment over the original Swedish version from 2009, featuring David Fincher’s sure-handed direction, a fine sympathetic (not to mention ironic) turn by Daniel Craig, a career-standout performance by Rooney Mara, and an outstanding soundtrack from Trent Reznor and Atticus Ross. This movie did justice to its ominous, foreboding, sexually charged source material, and proved that yes, Hollywood big budgets, name-brand stars, and grand production values can be worth the trouble.

6.) Scarface (1983) —- [Remake of Scarface (1932)]; This 1980s gangster classic about an ex-Cubano cartel enforcer has become so iconic that most people born after 1940 don’t even know it’s a remake of a far older original by Howard Hawkes. While the original 1932 title about an Italian mobster played by Paul Muni had its moments, the patient pacing, updated graphic violence, and dedicated titular performance by Al Pacino exceeded its inspiration in every single way. Thematically, Brian De Palma’s 1983 Miami-set film explores the concept of the American Dream better than almost any other Hollywood film ever made, and its climactic ending defines its central character better than most any film in cinema. You can’t take him — he’s Tony Montana! 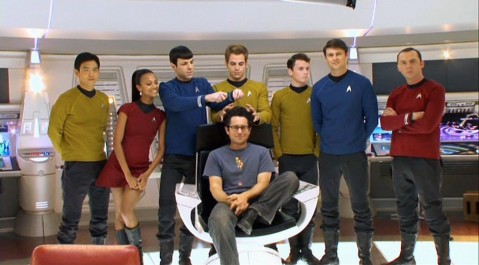 While many still lament the “devolution” of Star Trek into what was essentially more generic, space-adventure schlock, it’s hard to argue with the final results. Obnoxious lens flares notwithstanding, J.J. Abrams’ 2009 reboot exploded from the gates with a refreshing burst of energy and youthful spirit. It and its 2013 sequel certainly aren’t your childhood Star Trek and most definitely not your hippie-parents’ Star Trek, not to mention it throws 50+ years of canon out the window, but who cares? Star Trek is awesome again!

4.) The Thing (1982) —- [Remake of The Thing from Another World (1951)]; John Carpenter’s initially misunderstood practical effects-classic frequently tops many people’s “best of remakes” lists. The only reason it’s not at the number one spot here just says how highly I think of the following three films. With that in mind, Carpenter’s sci-fi classic is one of the few well known film remakes to actually be more faithful to its’ non-cinematic source material (Who Goes There? [1938] by John W. Campbell, Jr.) than the original film, and in most people’s minds it vastly improves upon the original and is the definitive film version of Campbell’s original shape-shifting villain. The film is one of the few science-fiction films to boast a healthy mix of complex thematic sci-fi and action (e.i. both science-fiction and science-fantasy), and it features some of the best practical creature effects ever made courtesy of special effects master Rob Bottin.

3.) Fury Road (2015) — [Re-imagining of the original Mad Max franchise (1979, 1981, 1985)]: While the original Mad Max was a chump-budget, high-octane blast from Down Under, which lit a fire in the action genre’s ass by the 1980s, and then The Road Warrior upped the ante even further, Beyond Thunderdome was a disappointing bust. The franchise went dormant for nearly thirty years as writer-director George Miller moved on to other projects and the genre itself stagnated during the 2000s.

Then, in May of 2015, the franchise came roaring back with its best entry yet, and what is already considered one of the greatest action films of all time. Aside from boasting memorable characters and an emotional story, Fury Road returned the big-budget action blockbuster to a reliance on practical FX, unforgettable location cinematography, and cinematic violence as a storytelling tool.

Enter the one-two-three punch of Ruper Wyatt’s and Matt Reeve’s Rise and Dawn of/War for the Planet of the Apes, respectively, which not only reinvigorated and legitimized a cartoony property that was hokey and poorly aged to begin with, but also updated a franchise that had been rebooted before in 2001 by Tim Burton. This new millennium Planet of the Apes series represents the best work by motion-capture whiz, Andy Serkis, and further showcases some of the finest digital FX this side of Lord of the Rings (2001-2003), arguing that new technology can still be used to enhance rather than neuter the magic of movie spectacle.

1.) The Dark Knight Trilogy (2005, 2008, 2012) —- [Reboot and re-imagining of DC’s Batman character, last in theatres with Joel Schumacher’s Batman and Robin (1997)]: In all fairness, this is the only argument I need. If we had all agreed (Hollywood studio executives included) that remakes are always 100% a bad thing, or that remakes are always doomed to be lesser than the earlier or original titles, or even at best they could only hope to equal the original’s artistry, then we would have never gotten The Dark Knight (2008). We would have never gotten Christopher Nolan’s image of Batman or Gotham City, no believable Batman origin story, Michael Caine would never have been Alfred Pennyworth, and Heath Ledger would have never had the chance to play a little role called The Joker. Our last cinematic image of Batman, arguably America’s greatest comic book superhero and an American cultural icon, would have been Batman and Robin.

I love movies, music, video games, and big, scary creatures.
View all posts by The Celtic Predator »
« ‘The Road’ (2009): The Most Depressing Post-Apocalyptic Movie Ever
‘The Interview’ (2014): A Political Satire Worth Seeing »

30 thoughts on “The Kids Are Alright: The 10 Most Effective Remakes, Reboots, and Re-Imaginings in Hollywood”