One of my most anticipated films of this year (2017) was Danny Boyle’s 21-year old followup to his seminal 1990s hit, Trainspotting (1996). Regarded as one of the finest Scottish films ever made, the original film made the careers of both star Ewan McGregor and its director, who would later direct the equally influential zombie flick, 28 Days Later (2002), and win Oscar gold with 2008’s Slumdog Millionaire. Its cult following can be attributed to its distinct 1990s zeitgeist mood, Boyle’s energetic, almost surrealist direction, and the story’s unabashed yet sardonic Scottish pride.

Needless to say, Trainspotting 2 (henceforth, T2), may be classified as one of countless series’ throwbacks, soft reboots, and post-franchise hiatus sequels of the 2000s and 2010s, which have ranged from as terrible as Terminator: Genisys (2015) to as spectacular as Mad Max: Fury Road (2015). Nervous anticipation has been high among fans of the original, particularly those who grew up with Trainspotting and came of age in the mid to late 1990s. One civilian working near the sequel’s production is alleged to have shouted a warning to the cast and crew, “This better not be shite, Danny!“ 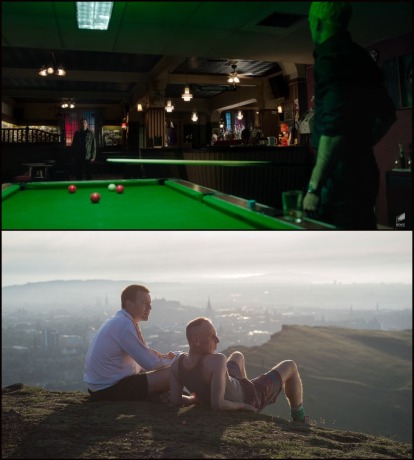 T2 is neither Genisys nor Fury Road, but I am happy to report it is far closer in quality to the latter than the former. Rather than ignoring the two decades since the original, T2 embraces the ideas of growing old, nostalgia, history repeating itself, and being a tourist in one’s own youth as its principal themes. T2 makes countless visual references to its forebear, often through sharp match-cuts or overlaid flashback sequences, such as when an older, present day Ewen Bremner (“Spud”) walks down an Edinburgh street only to “see” his younger self (along with a younger McGregor) race past him from the prequel’s opening scene.

Though T2 is not as breathless or energetic as its predecessor, it maintains Boyle’s charismatic, eclectic cinematography courtesy of longtime collaborator Anthony Dod Mantle, as well as the original’s self-reflexive editing. Boyle and editor Jon Harris utilize extensive montage sequences, some involving previously unseen flashbacks, some with stock footage from 1996’s Trainspotting, and others with various surrealist imagery. This distinct style keeps the story interesting and visually stimulating throughout, whether paired with special FX or not.

T2‘s dialogue editing is sharp, eye-catching, and powerful, emphasizing the emotional status of its actors in visual, yet not loaded ways. These sometimes rapid, sometimes deliberate edits are interwoven with the aforementioned flashback sequences, as well as stylized subtitles and vibrant color schemes a la John Wick (2014, 2017). Boyle wisely omits recurring voiceovers from McGregor or any other character, for that matter, referencing the original’s famous introductory monologue in a prescient, emotional sequence between McGregor and newcomer Anjela Nedyalkova.

Perhaps the most worrying element of T2 going into the theatre was its screenplay, but John Hodge’s (also writer of the original) thematic commitment to nostalgia and the passage of time elevates this late sequel’s emotional resonance, as well as its characters’ motivation for revenge, despair, or redemption. I cannot stress enough how this emphasis on these characters’ faded youth elevates this story. Instead of feeling flat, repetitive, or hopelessly lame — like an aging Hollywood star trying to recapture their vitality of decades’ past — T2 strikes that delicate, crucial balance all good sequels must achieve to justify their existence. The movie doesn’t wink at the audience or drown in nostalgia, but it’s aware both its characters and its audience are nostalgic for this material, for better or for worse.

T2‘s few drawbacks include a well acted yet underwritten female lead, the aforementioned Nedyalkova, and its somewhat self-serious climax. Nedyalkova plays an important part in the narrative, but she’s less a complete character than a symbolic or thematic plot device, almost a lens through which the audience can view our aged Scottish heroes. As for the film’s ending, its confrontation between Robert Carlyle’s Franco Begbie and McGregor is satisfying, but too dramatic for this narrative’s otherwise sardonic, cynical tone. That being said, its transition into the bittersweet epilogue arguably redeems it.

T2 is everything I wanted a sequel to Trainspotting to be, even if I didn’t know I wanted it. In many ways, it’s as much a coming-of-age tale as the original, but from the reverse perspective. This small but significant inversion of formula, combined with Boyle’s commitment to New Wave-style direction and eclectic editing, justifies T2‘s emotional full-circle story. It’s a little darker and less funny than the original, and not always to its benefit, but the flipside of that tonal shift is a more mature thematic analysis of its characters, setting, and self-reflexive cinematography. Needless to say, T2 won’t be the trendsetter that Trainspotting ’96 was, but it doesn’t need to be. The film is an admirable reflection and retrospective salute to a generation’s worth of filmmaking, and provides further contrarian argument to the ubiquitous apprehension to franchise remakes, reboots, and really, really, really late sequels.

SUMMARY & RECOMMENDATION: You can’t well appreciate this movie without seeing its namesake, but for what it’s worth, Trainspotting 2 is a conscientious, thoughtful followup to the original 1990s classic. Danny Boyle’s camerawork is as assured and identifiable as ever, whilst John Hodge’s intelligent script uses audience nostalgia to say something interesting, rather than merely recycling images and sounds just for the hell of it. Trainspotting is now a two-act play.

— However… Hodge continues to underwrite his limited female cast, while Carlyle’s final rampage against McGregor verges into horror filmmaking territory.

? You’re an addict, so be addicted! Just be addicted to something else… Choose the ones you love, choose your future. Choose life.