Two years before Zack Snyder’s Dawn of the Dead remake (2004) would debut, shocking audiences everywhere with its totally not-terrible, actually quite impressive modern take on George A. Romero’s 1978 classic, veteran English filmmaker Danny Boyle took on the post-apocalyptic concept with new millennium grit and an auteur’s artistic determination. The result was the best zombie film to have ever been made, and one of the most influential since Romero’s Night of the Living Dead (1968). 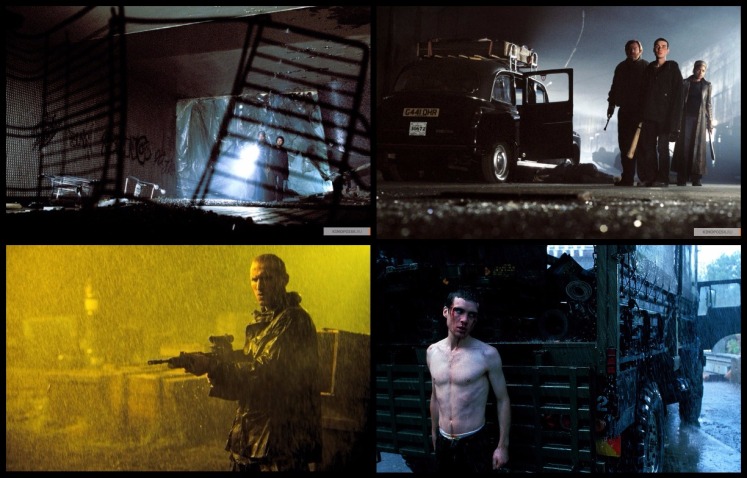 28 Days Later is a cycle of death, destruction, and forced rebirth. Only the strong… and compassionate survive.

Nerds can nitpick and bitch about what constitutes a “real” zombie and what defines an “infected”-whatever, but no matter what way one examines 28 Days Later, it’s a powerful piece of post-apocalyptic fiction with a heartwarming message, bloody violence and bleak visuals, and hauntingly beautiful sequences of a world returned to “normality.” Boyle is at is best here, demonstrating how potent his skills can be when paired with the right screenwriter.

What makes 28 DL so distinct from other zombie-subgenre films or any story about the end of the world for that matter, is how quiet it is. Much of the film is permeated by nothing other than silence and characters’ soft footsteps. The film has little soundtrack pieces and sparse dialogue, though the music that is used and the spoken words we do hear are used fantastically. Arguably the film’s most famous sequence is Cillian Murphy’s groggy revival from a month-long coma into a ruined zombie-wasteland (which The Walking Dead [2010-present] totally stole, by the way…), tuned to the song, “East Hastings” by Godspeed You! Black Emperor.

Other great silent or mostly silent pieces include the opening prologue where a chimpanzee test-animal is strapped in front of a series of monitors displaying horrific acts of human violence, rioting, looting, and chaos; there’s also a beautiful scene toward the middle of the film where Murphy and costars Brendan Gleeson, Naomie Harris, and Megan Burns relax in a meadow while watching a herd of horses, and another more haunting sequence where Murphy stalks an abandoned gas station and kills his first infected human with a baseball bat.

The film’s commentary and running theme on human violence permeates these quiet scenes, though never so that any image seems forced or heavy-handed. Upon rewatching the film, I was amazed at how composed, expertly framed, and “artsy” so many scenes were despite being set against a brutally bloody and often crude backdrop of humans and zombies tearing each other to pieces. That’s what sets this project apart from any of Romero’s increasingly hamfisted cornball films and any of its imitators, including the immensely popular TWD: 28 DL’s direction and cinematography are so hopelessly beautiful that they tell an entire story in nearly every scene, in nearly every shot practically. Alex Garland’s script is multi-layered and efficient, as are his effective characterizations, but it’s Boyle’s visuals that steal the show. 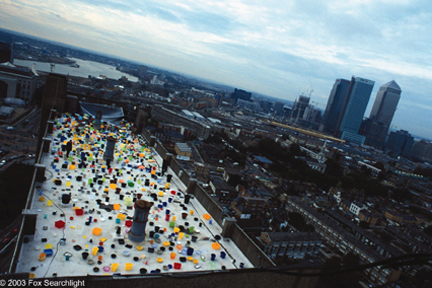 Boyle demonstrates his affection for colorful dutch angles throughout the film.

Speaking of those characters, actors Murphy and Harris are some of the most readily sympathetic and likable zombie-apocalypse survivors in history. Each have clear arcs and great chemistry, while their supporting cast is neither weird nor totally uninteresting like so many characters in Romero’s Dead anthologies or TWD. I cannot stress this fact enough that likable and well-acted characters are so sorely lacking from zombie-fiction, and 28 DL’s portrayal of a likable, deep cast in 113 minutes is superior to every cast-member from TWD’s entire five seasons so far, and I’m a fan of the show. From both a directing and a writing standpoint, Boyle’s zombie-picture is head and shoulders above the rest of the subgenre, so much so that it easily transcends the campy confines of its premise and achieves excellence as a cinematic piece unto itself.

Arguably the trickiest part of any post-apocalyptic narrative is ending it, and somehow 28 DL manages to pull that off as well. It’s not the cleanest climax, nor are the character arc destinations particularly smooth, but for all intents and purposes 28 DL wraps up all loose ends in a satisfying and realistic way. It manages to tell an incredibly bleak, dark tale with a beating human heart at its core and an uplifting message at the end of it all. It doesn’t drown in its cynical sorrows like TWD or any Romero film, nor does it shy away from ultraviolence and post-apocalyptic grit like Marc Forster’s shameful World War Z (2013) adaptation.

Whether you have a passing interest in zombie-fiction, are a TWD-lover, or can’t stand the undead stuff, 28 DL is worth your time. It’s great filmmaking any way you look at it, and along with Slumdog Millionaire (2008), is arguably Danny Boyle’s greatest directorial effort. If that’s not worth shouting about and screaming like you’re being chased by a horde of rabid flesh-eating zombies, I don’t know what is.

SUMMARY & RECOMMENDATION: Boyle works wonders with his camera and Anthondy Dod Mantle’s gorgeous cinematography. Even filmed on cheap, handheld DV-cameras, the film looks beautiful and brings a haunting vision of the end of the world to life in a way we’ve never experienced before or since. Garland’s script sets the stage for some passionate character-drama, but mostly shines in its simplicity and quiet humanity. Murphy, Harris, and company give great performances as zombie-apocalypse-survivors that are actually likable for once. John Murphy’s soundtrack is outstanding. I haven’t stopped listening to it over a decade later.

? Do you think they saw us this time?