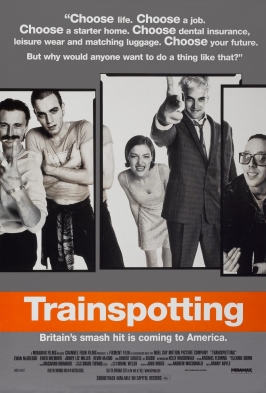 Widely considered one of Scotland’s finest films, Trainspotting is the rare drug addiction-tale to tackle serious material without taking itself too seriously. It is often described as black comedy, but I would liken it more to a drama with a crude, dark sense of humor. Its cinematography resembles that of Synecdoche New York (2008), where visual metaphors are used to illustrate everything from inner emotions to dream sequences. Ewan McGregor is a terrific lead, excelling both as a believable heroin-junkie and an effective narrator. The supporting cast is also strong, portraying the vivid world and personality of narcotics in Edinburgh. It is a good distance behind some of Danny Boyle’s most ambitious projects (i.e. Slumdog Millionaire [2008] and 28 Days Later [2002]), yet Trainspotting remains a strong picture in Boyle’s diverse body of work.

Top: Trainspotting begins with a jolt of energy that doesn’t let up until the credits roll. Bottom: Ewan McGregor investigates The Worst Toilet in Scotland.

The movie not only analyzes the world of heroine-junkies, as well as the crime and mental illness that so often coincide with it, it also examines the concurrent issues of urban poverty and squalor in Edinburgh. The film has a distinctly Scottish flavor, to the extent where one of the supporting characters, referring to the beautiful surrounding landscape, asks, “Doesn’t it make you proud to be Scottish?!”

…to which Ewan McGregor, replies,

“It’s SHITE being Scottish! We’re the lowest of the low. The scum of the fucking Earth! The most wretched, miserable, servile, pathetic trash that was ever shat into civilization. Some hate the English. I don’t. They’re just wankers. We, on the other hand, are COLONIZED by wankers. Can’t even find a decent culture to be colonized BY. We’re ruled by effete assholes. It’s a SHITE state of affairs to be in, Tommy, and all the fresh air in the world won’t make any fucking difference!”

While the film is quick to illustrate the emotional darkness and harsh social consequences of drug abuse, what adds depth to the the story is how it spends as much time showing the blatant hypocrisy and inappropriate reactions to it by larger society. Not only are narcotics demonized in a black-and-white fashion, but multiple characters consistently shame drug culture and the junkies that are a part of it. People look down on the drug addict-characters, always speaking in patronizing tones. The most noteworthy is of course the violent sociopath, Begbie (Robert Carlyle), who oozes condescension on his peers and dismisses their drug habitats as immoral and nonsensical, while at the same time flaunting problems with alcohol abuse and violent outbursts.

By no means does the story glorify drug use — quite the opposite, really — but a big part of its theme is that cultural phenomenons, like the abuse of narcotics and the behaviors surrounding them, are not simple issues with simple answers. The film neither celebrates nor condemns heroin-addiction, or drug abuse in general. Trainspotting just shows how fucked up it is, and how little the surrounding culture understands it. The screenplay takes time to explain that, while injecting heroin into one’s veins may make little sense to the uninitiated, it makes perfect sense to those who choose to do it.

The casting highlight of Trainspotting is Ewan McGregor’s lead performance. The Scottish native excels as a rebellious, conflicted, witty, drug-abusing resident of Edinburgh. He’s a great protagonist who is likable within the first few minutes, and comes across as intelligent and observant without having to be labelled a super-genius. McGregor doubles as the film’s narrator, describing and elaborating on the events as they unfold. He’s one of the better movie-narrators I’ve heard out of all the many films I’ve watched, and he’s not even named Morgan Freeman. It’s a treat to watch and hear him do his thing.

Boyle’s direction shines in many parts of Trainspotting, but his surrealist sequences and psychedelic imagery are the film’s highlights. Whether it’s McGregor climbing into the worst toilet in Scotland or a zombified baby crawling on the ceiling during a drug-withdrawal, there are few visuals in Trainspotting you will forget. These metaphors give the humorous drama a unique and nuanced feel, and lend personality to an unforgettable sociopolitical drama.

I enjoyed this film from start to finish. It is yet another brilliant film from Danny Boyle’s terrific filmography. Though not on par with his later works like 28 Days Later and Slumdog Millionaire, with Trainspotting, Danny Boyle established he was a directing talent to watch a long time ago. Trainspotting is considered one of the best films ever about drug-culture and drug-addiction, as well as perhaps the best film ever made about Scotland. It’s brilliant.

SUMMARY & RECOMMENDATION: Trainspotting dissects the uncomfortable and messy issue of drug abuse in a way that is heartfelt and serious, but also funny and eccentric. Its variety of interesting characters help flesh out this social commentary. Danny Boyle employs fast-paced editing, excellent voiceovers, and startling dream sequences to great effect. Ewan McGregor is a perfect lead.

— However… a few minor characters are underused. Some scenes are repetitive and unnecessary.

—> RECOMMENDED: As bizarre as Trainspotting may feel to certain audiences today, no one in their right mind could deny the effectiveness of Brian Tufano’s energetic camerawork, Masahiro Hirakubo’s relentless edits, and the cast’s biting sense of humor. Danny Boyle commands it all in a film that has since defined his career.

? In a sort of counterintuitive way, McGregor’s protagonist is a memorable Homer for modern Scottish society.

I love movies, music, video games, and big, scary creatures.
View all posts by The Celtic Predator »
« ‘Spirited Away’ (2001): That One Anime Movie Everyone Knows
‘A Better Tomorrow’ (1986): An Early John Woo-Misfire »