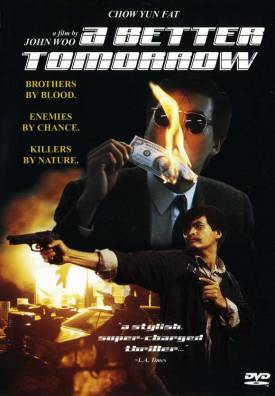 A Better Tomorrow was John Woo’s first action-blockbuster and is also his weakest. Every aspect of this film feels weak compared to Woo’s later efforts, from the writing to the direction to its action. Though its style and star Chow Yun-Fat’s screen presence lay the groundwork for the magnificent filmmaking that would follow, A Better Tomorrow isn’t worth watching beyond its nostalgic or historical value as a footnote in its director’s greater career. The film’s screenplay as a whole feels haphazard and disorganized. The action scenes, though shot in typical beautiful John Woo-fashion, are paced poorly and seemingly thrown into the story at random. There is no rhyme or rhythm to the story or action sequences. 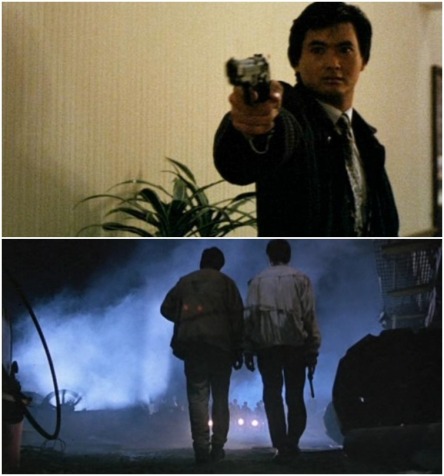 Top: One of the film’s many shootouts, shot in trademark John Woo-style. Chow-Yun Fat prepares to take out a host of gangsters. Bottom: The final shot of the film, where our two heroes (Leslie Cheung and Ti Lung) walk, exhausted, to meet their judgement. If only the rest of the narrative had this picturesque cohesion and clarity.

The main conflict of the plot is the classic blood feud between a gangster and his cop-brother. A large part of the problem with the plot’s central conflict is that Chow Yun-Fat, typically Woo’s most effective weapon, is totally unnecessary in this equation, and yet Woo shoves him into the movie wherever he can. Yun-Fat is not part of this blood-brother feud at all (why not make him one of the two main brothers?), and furthermore, he has no character! I couldn’t give a rat’s ass about what Yun-Fat was doing because his character didn’t do anything at all! Why was he even in this movie?

As for the brothers themselves (Ti Lung and Leslie Cheung), they are almost as boring, plain, and uninteresting as Chow’s role. There is nothing special about either one of them, and the whole cop-gangster brother dynamic feels derivative and by-the-numbers. It seems apparent to me that, at this stage of his directing career, Woo wanted to get these character development and dialogue-scenes out of the way so he could get us back to the action. This range of attention to critical writing and characterizations from A Better Tomorrow to The Killer (1989) to Hard-Boiled (1992) is staggering. It almost feels like they were made by different filmmakers.

All things considered, Tomorrow does feature the standard Woo shoot-em-up action we all know and love, and I suppose its story has enough of a pulse to make things watchable, but this whole Hong Kong-action experience feels watered down compared to what came after it. This film may be a “classic” of Chinese-Cantonese cinema, but it’s not a good film by any means. It’s not horrible, yet I can’t see myself ever recommending it to others when there are so many better choices of films in the same style as this, even by the same director. A Better Tomorrow retains the bloody, beautiful gun-violence reminiscent of Woo’s best narratives, but it is ultimately its lacking narrative that holds it back.

SUMMARY & RECOMMENDATION: John Woo’s signature action-style is present in droves, but a confusing, nonsensical script and a wasted performance from Chow Yun-Fat neuters much of the fun. The film is poorly paced and I don’t care about any of the characters.

— However… the action itself, though it feels thrown into the plot at random, is cool and well staged. Wing-Hung Wong’s direction of photography hints at the far superior John Woo action scenes to come in future movies.

? I remember as soon as we finished watching the movie, I turned to my friend, who looked about as disinterested as I was, and asked, “What the hell was going on?” Seriously, I had no idea.