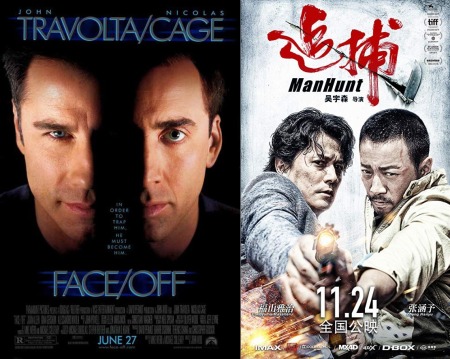 One of the most quietly influential genre filmmakers of the last 30 years is the Hong Kong action-auteur, John Woo. The man rose to cult prominence in Cantonese cinema with balletic, melodramatic shoot-’em-ups like A Better Tomorrow (1986), The Killer (1989), and Hard-Boiled (1992) — precursors to the East Asian influences present in the Wachowskis’ The Matrix (1999) — then transitioned to Hollywood from the mid-1990s to the early 2000s. Like other foreign auteurs attracted to Hollywood for its fame, money, and diversity of international talent (see also: George Miller, Christopher Nolan, Alejandro Iñárritu, Alfonso Cuarón, José Padilha, Ang Lee, Taika Waititi, Kim Jee-woon, etc.), Woo struggled with the industry’s excessive studio interference, lack of total directorial control, and bureaucratic oversight for big-budget productions aimed at general audiences. Most of his Hollywood movies felt bereft of that signature “Woo style” (e.g. over-the-top, megalomaniacal characters, slow-motion shootouts, excessive pyrotechnics and blood squibs, Mexican standoffs, doves everywhere, etc.) and sooner or later faded into the annals of forgotten Hollywood action schlock (e.g. Hard Target [1993], Broken Arrow [1996], Windtalkers [2002], Paycheck [2003]). A couple exceptions included 1997’s Face/Off, which featured the perfect balance of Hollywood studio production values, star personas, and Woo-theatricality, and 2000’s Mission: Impossible 2 (MI2), the highest grossing film of that year, which remains one of the most absurd, entertaining purebred action experiences made by Woo on either side of the Pacific. 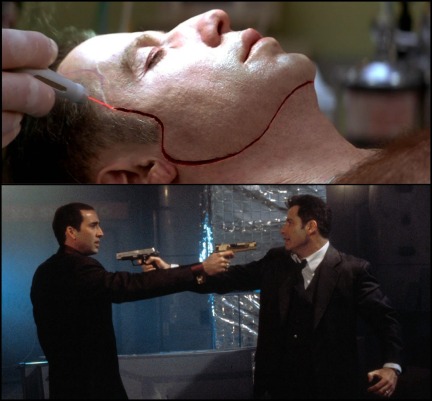 Top: The titular “face-off” surgery on which the movie’s plot hinges doesn’t make much sense, but that plot is also super-entertaining. Bottom: Acts Two and Three of Face/Off see Travolta (right) and Cage (left) literally playing each other’s characters from Act One.

After his mixed success in the States, Woo returned to East Asia, this time under the umbrella of mainland Chinese productions (i.e. projects approved by the Chinese Communist Party), debuting his two-part historical epic, Red Cliff (2008-2009), followed thereafter by a generic wuxia film, Reign of Assassins (2010), and a Chinese ripoff of Titanic (1997), The Crossing (2014-2015). Suffice it to say that none of the movies Woo made after the turn of the millennium in any language felt like his earlier classics, save for a mid-budgeted, multilingual picture distributed by Netflix in 2017 called Manhunt.

I’ll discuss the impact of MI2 another time, as that film has as much connection to contemporary Hollywood tentpole filmmaking as any modern superhero or Fast and the Furious (2000-) installment. Today is for appreciation of my favorite John Woo American production, Face/Off, and his first true return to Hong Kong action cinema, Manhunt. The former is one of the more remarkable productions resulting from foreign talent funded by American major studio dollars, as it features not one, but two then A-list Hollywood stars, John Travolta and Nicolas Cage, a massive budget for the time ($80 million), and a near career-best directorial effort from Woo.

Face/Off’s most unique attribute, however, is its creative screenplay and story structure from which the title is drawn: An FBI manhunt for and capture of a bloodthirsty terrorist (Cage), lead by Travolta, prompts the latter to undergo complicated plastic surgery to assume the former’s identity, thereby allowing Travolta to go undercover to foil a bomb plot laid by Cage and his associate, Alessandro Nivola. Events don’t go as planned, however, when Cage breaks out of confinement and undergoes the same surgical procedure Trovalta did to steal his identity. While this premise sounds ridiculous and the titular fictional “face-off” procedure requires significant suspension of disbelief (the script’s original form utilized a futuristic science-fiction background), Travolta and Cage sell both their heroic and villainous performances in dual exercises of sheer acting range. Screenwriters Mike Werb and Michael Colleary worked with Woo to emphasize the plot’s familial drama angle (Cage and Travolta’s love interests and children factor prominently into the story) to give the film an emotional bedrock on which Woo’s signature gunplay and the aforementioned “identity theft” are built. Together, these elements combine for potent psychological melodrama that gives all characters proper motivation and makes the action sequences feel consequential.

Manhunt is John Woo going back to his roots in ways even more direct than Face/Off or MI2, though not always executing that auteur style to the best of his ability. A mainland Chinese-Hong Kong coproduction set and shot in Japan, Manhunt features co-leads Fukuyama Masaharu as an Osaka detective and Zhang Hanyu as a Chinese attorney involved in a convoluted criminal conspiracy even more ridiculous than the plots of Face/Off, The Killer, Hard-Boiled, etc. Though this stupid plot devolves into weird sci-fi antics by its conclusion (think chemically altered super-soldiers), the first two acts pace this bizarre mystery well enough to maintain tension and build decent chemistry between Fukuyama and Zhang, who converse with each other via English in a creative use of language-barriers and lingua franca.

Outside the plot, Manhunt features cool foot and vehicle chases as well as a variety of violent action sequences that Woo and director of photography, Takuro Ishizaki, clearly relish shooting. Most all the set-pieces take place outside and during the day, allowing for extensive, unobstructed action choreography that unfolds across multiple locations without spinning out of control (e.g. Face/Off) or losing sense of scale (e.g. Red Cliff). Related to its script but more a result of editing is the film’s length (106 minutes), which wraps the story and its many fight scenes at a reasonable point without feeling rushed or bloated. 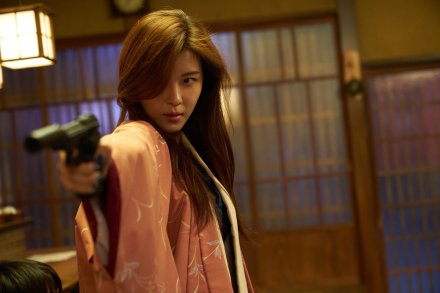 John Woo’s career has had as many ups and downs as any experienced filmmaker, but I always feel satisfied for a director who recaptures their earlier, formative works either on purpose or by accident later in their career; think John Carpenter’s work on The Ward (2010) or George Miller’s work on Fury Road (2015), even if those later works weren’t always fan-favorites. Face/Off shows the power of Woo’s iconic slow-motion gunplay against massive Hollywood production values in a mid-career peak, while Manhunt demonstrates the man has enough mojo and directorial savvy to recreate, in a sense, his older classics without plagiarizing them. I recommend Face/Off more to general audiences over Manhunt, as the former’s characterizations and plot take better advantage of their premise than the latter, but fans of Hong Kong action cinema will enjoy both until the cows come home.

SUMMARY & RECOMMENDATION: More stylish than most of John Woo’s bland Hollywood or mainland Chinese filmography and better structured than his earliest works, Face/Off comes the closest to replicating the auteur’s greatest narrative melodramas (e.g. The Killer, Hard-Boiled), while Manhunt calls back to his grittiest action cinematography. Both movies are based atop plot-devices as ridiculous as they are interesting, however, so enjoyment of either requires high levels of suspension of disbelief. Manhunt, unlike Face/Off, also isn’t able to stick the landing.

—> Face/Off comes RECOMMENDED while I’m ON THE FENCE with regards to Manhunt unless you’re a dedicated fan of John Woo like I am.

I love movies, music, video games, and big, scary creatures.
View all posts by The Celtic Predator »
« ‘The Matrix Resurrections’ (2021): The Power of Love
HBO Shows Are Still the Best »