After a series of unsuccessful projects out West, John Woo returned to Asia and crafted the film with the largest scale and the biggest budget of his career. Though its action sequences remain incomparable to that of his best films, Woo demonstrates some of the strongest characterizations of his entire filmography, and showcases an amazing grasp of dramatic cinematography. Red Cliff is, all things considered, a welcome return to form for the famous and influential action-director John Woo.

Visually speaking, the film is extraordinary, barring a few repetitive transition shots, and looks as grand as it feels both indoors and when the action marches through beautiful Asian vistas. The grimy look of the period-drama fits both the bloody action scenes and the intimate sets of character development and political maneuvering. The film is a treat to look at in general, displaying the trademark direction of Woo that we’ve all grown to love.

Left: The film’s colors and soundscape are as diverse as its action set-pieces. Right: The film’s antagonist, played by Zhang Fengyi, commands the evil spotlight with an appropriate iron fist and malevolent demeanor.

Woo’ camerawork emphasizes the personality of every individual in each exchange of dialogue, making every conversation energized and fast-paced. A great example of this directorial style is Woo’s staging of a strategic war counsel, where our underdog heroes plan how to counter the immense, overwhelming military of antagonist Cao Cao (played by an admirable Zhang Fengyi) using the Bagua Formation to dismantle the latter’s vanguard force. The camera’s perspective shifts in and out of the war counsel to Cao Cao’s flagship, continuing back and forth as the strategies of both forces are finalized. It’s a creative use of parallel editing and tracking shots, which transforms what would be, in most filmmakers’ hands, a by-the-numbers dialogue sequence killing time between action scenes. Woo uses this and other cinematic techniques to make expository dialogue and character moments visually interesting. It’s the biggest strength of the whole picture, and does much to streamline the narrative’s pacing over four hours of running time.

The action sequences are well choreographed and boast considerable production values. However, even the opening battle sequence, easily the best action in the whole four and a half hours, never comes close to rivaling the tension and mastery displayed in either of Woo’s best films, The Killer (1989) and Hard-Boiled (1991). A big reason for this gap in quality is that, despite how impressive the warfare is, the pacing and flow of the action never feels comparable to a similarly epic story of arms and armor like, say, The Lord of the Rings (2001-2003), because none of our main heroes (save one) ever bite the dust or feel remotely threatened. Almost none of the good guys are ever shown suffering major casualties or verging close to defeat. Aside from the more balanced introductory battle, it’s the good guys winning all the time regardless of their enemy’s superior numbers, and this sucks much of the tension out of the beautifully shot warfare.

Because of the heroes’ seemingly genius battle strategies, all but one of the clashes appear to be won before the first arrow is drawn, thereby wasting those action scenes’ potential. This is disappointing considering the scale of these conflicts. In The Killer and Hard-Boiled, there were only two guys we were rooting for against the world, so their unstoppable nature felt more appropriate, and Chow Yun-Fat’s characters actually dies at the end of The Killer. Only one notable hero dies in the entirety of Red Cliff. For a huge ensemble cast in a war film, that lack of tension and heroic mortality is inexcusable.

That being said, the large cast is filled with diverse personalities, charismatic actors, and interesting characters. Each character has their own minor quirks that mirror their style of combat, adding some personality to the bombastic action sequences. Nobody here is unforgettable, but everybody is relatable enough, and they all have enough at stake to motivate them to stand up to their common foe. 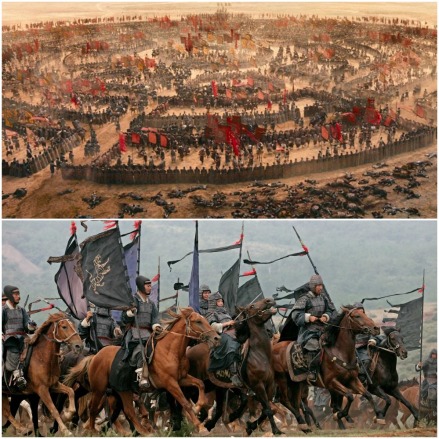 In addition, the music sounds glorious and fits perfectly with the majestic, epic tone of the movie. The meld between the excellent cinematography and a lush score during the opening credits is a great introduction to the adventure that awaits. Everything from woodwinds, string instruments, and pounding percussion ensembles fill the soundscape of Red Cliff, making the world feel alive and powerful. The soundtrack feels reminiscent of A. R. Rahman’s library, minus the electronic elements, in that it combines both Western and Eastern musical styles to great effect.

I had high hopes for Red Cliff, considering Woo’s much anticipated return to Asia and the subsequent positive reaction that it garnered. I was disappointed with the action sequences as a whole, given how much John Woo has influenced the genre, and how combat-orientated much of the film is. The film’s action sequences look beautiful, but they should hit much harder than they do.

With that said, Red Cliff sinks or swims, like all narrative epics, on its quieter moments. As important as the action is, especially under a masterful conductor of violent chaos like Woo, the dramatic personality of a tale this long, complex, and sprawling is more important. Given the heights of the Hong Kong director’s career in the 1980s and early 1990s, and taking into account how disappointing his Hollywood career was, the success of Red Cliff is a more than a welcome return to form. Red Cliff is far from flawless, but it represents some of the best that modern Chinese action cinema has to offer. John Woo has got his mojo back.

SUMMARY & RECOMMENDATION: Red Cliff is a well paced, well written, character-driven epic that succeeds on the basis of its characterizations and dramatic cinematography. Its action is subpar given its director’s history, but it’s strong enough to justify the spectacle and impressive production values of the film as a whole.

— However… the intensity of the action scenes themselves is surprisingly poor (few of our major characters ever feel like they’re in a state of vulnerability), which is a considerable let-down given all the talent on display.

? It’s more important how your audience feels about a historical adaptation, rather than the accuracy of the history adapted therein. This is filmmaking, not a history lesson.