Regardless of your opinions on Aaron Sorkin’s semi-sexist rants or hamfisted social commentary (e.g. The News Room [2012-2014]), the man can write a screenplay like it’s nobody’s business. Five years ago, he delivered a killer script for David Fincher’s killer Facebook melodrama, The Social Network (2010), helping Fincher turn a dialogue-heavy courtroom drama about computer science-geeks into a tense, moody, and dark story. This year, he’s done it again with Steve Jobs, the long awaited (good) biopic about the eponymous tech giant and Apple Inc. co-founder. 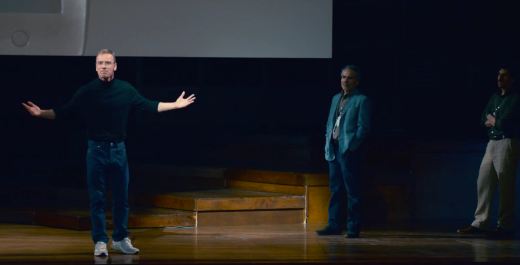 To say that Steve Jobs is much smaller in scale than The Social Network would be putting it mildly, and Danny Boyle’s direction of the project is more reserved and minimalist compared to Fincher’s dark masterpieces. While Boyle can direct as powerful a movie as Fincher can on a good day (e.g. 28 Days Later [2002], Slumdog Millionaire [2008]), he’s far less consistent and seems to have restrained himself for this dramatic but very slice-of-(genius) life picture. SJ portrays only three brief segments of Jobs’ career, the lead-ups to three critical product launches in the early years of the personal computer industry, from which the film is divided into a neat, three-act structure.

The first act depicts the 1984 launch of the Apple Macintosh and introduces us to Jobs’ various business rivalries, corporate blood feuds, and a melodramatic he-said/she-said relationship with his ex-girlfriend and alleged daughter, the latter of which forms the emotional core of the entire movie. The second act concerns the 1988 launch of the NeXT Computer, and the third shows the launch of the iMac in 1998. Across all three acts is a progression through every one of Jobs’ business and familial relationships, culminating in the 1998 section that brings the development of Jobs full circle and wraps up each narrative loose end.

The power of Sorkin’s script and the effectiveness of Boyle’s reserved visuals are evident in the sheer drama generated by dialogue exchanges in each act. Nearly every scene feels like a verbal sparring match translated into effective visual language using the power of cinema. Unlike most Oscar-bait, which feel like boring “talking-movies” or glorified plays, SJ’s dialogue is anything but sleep-inducing; rather, it is utterly captivating. Boyle cross-cuts multiple conversations with flashback sequences for a sort of “montage-juxtaposition” effect, demonstrating the before-and-after development of all characters involved, which in turn parallels the film’s themes of technological advancement. Boyle uses further montage sequences to bridge the time-gaps between each product launch, and also inserts clever stock footage of various historical allusions against set backgrounds, adding a surprising amount of color variety to film that takes place almost entirely within indoor auditoriums.

Rounding out this creative display of dialogue-driven drama is the movie’s use of the cinematic medium itself, i.e. how each act was shot and recorded on different materials; the first act in 1984 was shot on 16mm film stock, the second act in 1988 was shot on 35mm, and the final act in 1998 was shot on HD video. Aside from adding yet more visual oomph to this would be talkie-movie, this thematic mood of technological progression lends considerable depth to the cast’s feuds over the future of computing. It’s fascinating to watch and begs the question as to why more mainstream filmmakers don’t tinker with the use of movie-media.

The film’s ending is more emotional than one would expect from this kind of picture, lacking much of the cynicism and dark charm of Fincher’s Social Network and instead choosing to emphasize the humanity behind the software and hardware on display. While most of these conversations depicted probably never took place, at least not in this poetic order, Boyle and Sorkin’s SJ watches like a respectful yet incredibly honest realization of America’s invention of the digital age. This tale encapsulates Jobs’ lofty aspirations and tenacious ambition, but Sorkin stops far short of glorifying this kind of cold vanity and grounds it in the real-life reconciliation of Jobs’ family, bound by both business and blood. 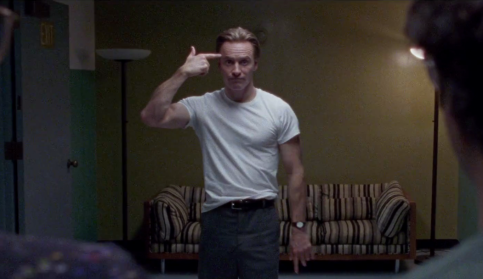 Make the Mac say hi, or else.

I found this tale uplifting and satisfying, lacking both Hollywood schmaltz and tedious indie sarcasm. It’s emotional without being caricatured or melodramatic, and blunt while not being overly dark or morbid. I’m not sure what I’d niptick about the movie besides the overall repetitive scenery, given how the film has such a focused scope, courtesy of Sorkin’s screenplay, and how Boyle lights up every scene with the subtlest of filmmaking tricks. Given its status as a veritable commercial flop, I’m hoping it gets at least some Oscar attention; the Academy seems to love biopics, and here at last we have one that’s deserving of multiple nominations.

Altogether, Steve Jobs is a great summation of Sorkin’s talents as a screenwriter, a return to form for Boyle, and a passionate nod to the late co-founder of Apple. As with all biopics and films “based on true events,” SJ is an artistic piece before an objective historical analysis, but I don’t think that fact will spoil many people’s enjoyment of this solid film, and it shouldn’t.

SUMMARY & RECOMMENDATION: Sorkin delivers another effective, efficient screenplay that boils down decades of historical controversy and personal battles into a cocktail mix of cinematic drama. It’s lean, mean, and somehow action-packed. Much of that verbal action is translated into cinematic action via Boyle’s steady camera and clever use of media. Steve Jobs features some of the finest usage of montage and cross-cutting in the modern era.

— However… Steve Jobs‘ set design isn’t exactly spellbinding. Fassbender perhaps didn’t need to be that much of an asshole in the opening act.

I love movies, music, video games, and big, scary creatures.
View all posts by The Celtic Predator »
« ‘Crimson Peak’ (2015): A Gothic Horror Throwback
‘Bridge of Spies’ (2015): A Mediocre Historical Drama for Your Parents »