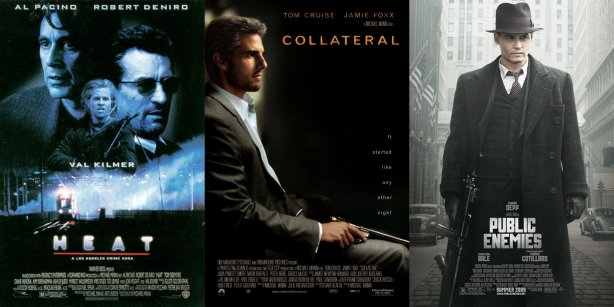 Practical, liquid gore FX may crop up every now and then in a gritty period drama or popular horror film, but the spectacular, graphic squibs made infamous by Paul Verhoeven’s satirical Hollywood science-fiction action films (e.g. Robocop [1987], Total Recall [1990], Starship Troopers [1997]) are more or less extinct in contemporary action flicks, even good ones like The Raid (2011) or John Wick (2014, 2017, 2019). By the same token, most gun sound FX in all sorts of genre films rarely feel as deafening as firearms in real life, which undercuts many of these films’ most powerful moments the way mainstream blockbusters do when countless henchmen are gunned down without signs of anguish, pain, or bloodshed.

One of my favorite old-school filmmakers who orchestrates both of those aforementioned subtle yet important FX well is the native Midwesterner, Michael Mann. Renowned for his hard-boiled crime thrillers and iconic heist set-pieces in particular, Mann has influenced multiple generations of artists including filmmakers Christopher Nolan (see The Dark Knight [2008]), Mia Hansen-Love, Ben Affleck (see The Town [2010]), and Tony Gilroy, as well as the Grand Theft Auto (1997-2021) videogame series and perhaps even multiple real-life(!) armed robberies. His most famous films meld a desaturated, moody neo-noir aesthetic with vicious, brutal action sequences defined by casual, not melodramatic ultraviolence and those loud, loud gunshots, many of which are captured live on set.

Heat is often regarded as the single most influential heist movie (i.e. a crime drama centered around large-scale burglaries, armed bank robberies, etc.) ever made, and it’s easy to see why: The film is a 170-minute epic that doesn’t feel its length with a broad cast of then A-list stars and multiple expansive shootouts. Though Mann’s penchant for emotional, character-driven crime drama predated his 1995 magnum opus (see his directorial debut in Thief [1981]), Heat represents the apex of his ambitious, detailed characterizations exploited by his now famous sound-editing, violent action, and macabre color palette. Layer on an impressive heroic and villainous ensemble led by Pacino and De Niro, most of whom boast detailed personal backstories with meaningful love interests (a trait of all three movies featured here), and you have potent cinematic drama.

Though at a distance Collateral feels quite similar to your stereotypical Mann-crime thriller or one of their many descendants, this veritable nighttime neo-noir represents a major deviation and, in some ways, a significant shift in Mann’s career as a visual storyteller. Collateral was the first major Hollywood feature to embrace the wider dynamic range and overall sleeker, more “binary look (e.g. glowing, non-directional ambient light, more noticeable fluorescent hues, etc.) of digital cameras, as well as the first film anywhere to my knowledge to do so in high definition (1080×1920 pixels or “HD”; 28 Days Later [2002], also shot digitally almost in its entirety, predated HD digital technology). This choice of digital stock is pertinent to Collateral’s overall tone, as its narrative takes place over a single night from dusk till dawn, where all outdoor nighttime cinematography (the majority of the story) was shot on Thomson Viper FilmStream Cameras, while the few sunset sequences and indoor photography were captured on 35mm.

Collateral remains one of only two features in Mann’s filmography for which the director has no writer’s credit. The original screenplay, penned by Australian Stuart Beattie, is perhaps my favorite Mann has directed given its delicious premise and eclectic casting. Cruise’s contract killer antagonist is my favorite role of his career, while Foxx’s meek, mild-mannered Average Joe portrays one of the more satisfying arcs in any crime drama from the past generation, as well as a noteworthy yet believable emotional range.

Mann’s most noteworthy period-piece other than The Last of the Mohicans (1992), Public Enemies, like Collateral, stands apart from many of his other thrillers despite its characteristic emphasis on organized crime, controversial law enforcement practices, and of course, heists. By far the least well paced of this trio of films at 140 minutes (it feels longer than Heat), the film is adapted from Bryan Burrough’s nonfiction book, Public Enemies: America’s Greatest Crime Wave and the Birth of the FBI (2004), and was originally intended by the author to be adapted into an HBO miniseries. That rough translation to a theatrical feature shows in the movie’s extensive runtime yet shallow focus on certain major characters, Bale’s FBI poster-boy, Melvin Purvis, most of all. Enemies nevertheless captivates when Depp’s Dillinger commands the screen (it remains one of his last great performances) either with memorable love interest Marion Cotillard or his various gangster colleagues, while longtime Mann-collaborator Dante Spinotti keeps the Tommy Gun action fresh with his fluid interchange between motion-controlled and handheld camerawork.

Michael Mann’s filmography, his hard-boiled crime dramas most of all, are difficult to summarize without writing thousands of words, yet I believe his effective combinations of patient, emotional characterizations on both sides of the law, visceral action filmmaking, and unforgettable sound-editing separate his movies from the lion’s share of generic, forgettable crime thrillers that populated cinemas of yesteryear and continue to overcrowd contemporary streaming platforms to this day. Top to bottom, Mann provides big-budget, high production-value crime thrills without skimping on the realistic blood and deafening gunshots that should be endemic to that type of filmic storytelling, but are too often sidelined for the benefit of (*shudder*… )… “general audiences.”

SUMMARY & RECOMMENDATION: Though Mann’s last feature (Blackhat [2015]) was some time ago and his next (Ferrari [TBA]) is likely to be his last, his legacy of artful armed robbery on both celluloid and in binary demonstrate how filmmakers can evolve over decades without compromising what made their auteur style special in the first place. Impeccable sound-design, effective though not gratuitous violence, and memorable characterizations make these three movies great fun for crime drama aficionados everywhere.

— However… Public Enemies struggles with its narrative pace and shortchanged heroic characters, unlike Heat and Collateral.

—> Heat and Collateral come RECOMMENDED, while I’m ON THE FENCE with regard to Public Enemies.

? Elliot Goldenthal can write a good score, but the best part of Enemies‘ soundtrack is Otis Taylor’s “10 Million Slaves,” which feels period-appropriate.

I love movies, music, video games, and big, scary creatures.
View all posts by The Celtic Predator »
« ‘Crimes of the Future’ (2022): The Master of Body Horror Returns to His Roots
Where You Belong & the Folly of Regret »