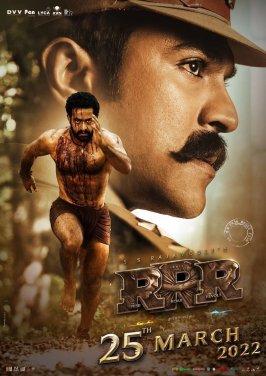 I owe much to Koduri Srisaila Sri Rajamouli, also known as S. S. Rajamouli, for introducing me to the populist blockbusters of South India. Though the various regional film industries of the Indian subcontinent remain highly segregated by language, and I had sampled a few South Indian dramas (e.g. Maryan, Mumbai Police, Neram [all 2013]) prior to watching any of Rajamouli’s works, his two-part epic, Baahubali [2015, 2017], was a watershed moment for South Indian Cinema in general and my greater exposure to South Asian filmmaking in particular. Clear distinctions in both culture and style can be drawn between the more dramatic, romantic cinema of northern South Asian productions based in Mumbai — Hindi filmmaking, also known internationally as Bollywood — versus the more genre-focused, action-oriented filmmaking stables of the Dravidian-language based South Indian Cinema — the collective summary of the Karnataka (Kannada language), Tamil Nadu (Tamil language), Kerala (Malayalam language), and Telangana/Andhra Pradesh (Telugu language)-state film industries; these differences may not have been highlighted to me for years had I not seen Rajamouli’s most famous work when I did. 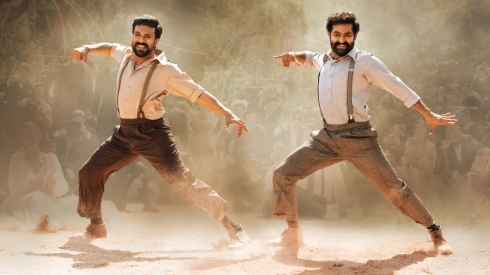 Ram Charan (left) and N. T. Rama Rao Jr. (right) dance in the sand in one of RRR’s few but memorable song numbers.

Most audiences outside of South Asia mistake most if not all Indian filmmaking for Bollywood (Bombay + Hollywood = “Bollywood”), which is understandable given the Mumbai film industry’s greater international reach, historically, compared to its regional peers; in fact, however, Hindi filmmaking constitutes a minority of not only South Asian (SA) filmmaking, but even India’s national film output alone. In the years since Baahubali’s release, additional bigger budgeted, high-concept blockbusters from the southern portion of the Indian peninsula, such as 2.0 (2018; Tamil), K.G.F. (2018, 2022; Kannada), Saaho (Telugu), and another Rajamouli picture, RRR (Raudraṁ Raṇaṁ Rudhiraṁ in Telugu, or Rise Roar Revolt in English), have followed to varying degrees of box office success.

The latter film, starring previous Rajamouli-collaborators N. T. Rama Rao Jr. and Ram Charan, is far and away the best of those aforementioned South Indian followups to Baahubali’s trendsetting success, perhaps not unsurprising given its creative leadership. I’ve seen not only dozens of South Indian (SI) movies since 2017, but also multiple other Rajamouli pictures prior to RRR’s release, and the gap in quality between the average SI feature and Rajamouli picture is not insignificant. Rajamouli’s eye for cinematic action keeps him ahead of the slow-motion, wannabe Matrix (1999)-style of most SA genre films, while his musical numbers visually and tonally mesh with his overarching narratives and never feel like obligatory, throwaway sequences meant to bolster his films’ marketability. Most of his characterizations also pass the minimum thresholds for blockbuster filmmaking, avoiding cliched stereotypes and often eliminating the cringeworthy comic relief characters that plague mainstream crowdpleasers, Indian ones most of all.

All these standard Rajamouli hallmarks of quality are present in RRR, which, while not as fantastical nor as ambitious as Baahubali, is just as satisfying given its relatable heroic performances, great pacing, effective action sequences, sparse yet fun musical numbers, and self-contained narrative. Throughout my recent explorations of modern Indian, if not world cinema, I’ve noticed a steady proliferation of unnecessary digital composite backgrounds for basic wide shots or ensemble dialogue sequences, as well as computer generated imagery (CGI) eyesores of everything from common wildlife (e.g. deer, rodents, perching birds, etc.) to flying projectiles to explosion debris, regardless of a film’s genre or budget. These lazy directorial shortcuts reek of artistic sloppiness, and I’m thankful to report RRR minimizes if not eliminates most of these bad trends, shooting most every shot of every outdoor sequence on location with natural light, keeping CGI FX in the background and out of focus as much as possible; even the close-quarters-combat action sequences minimize cheesy slow-motion and digital stunt doubles.

Top to bottom, the only bad aspects of RRR’s direction are that, as much as the CGI renderings themselves have improved since Baahubali only 5-7 years ago, they still aren’t seamless. It’s cool to watch co-lead Rao Jr. battle a Bengal tiger or conk several British Raj soldiers with a motorcycle, but both said tiger and motorbike still don’t look real and distract from their action scenes’ tension, much like the flaming cow stampede and avalanche from Baahubali. 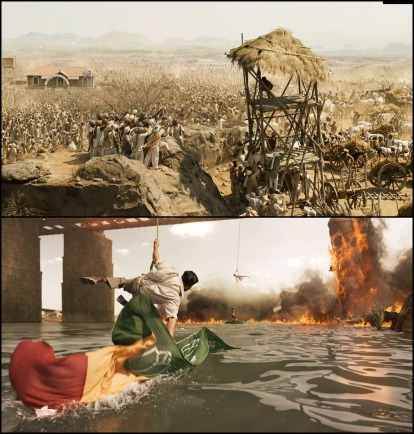 Top: Ram Charan (top of the tower, foreground) muscles his way through a mob of ~1000 extras in my favorite sequence of the film. Bottom: In one of RRR’s weirder set-pieces, Charan and Rao Jr. meet for the first time to rescue a child trapped by an oil fire.

On the screenplay side of things, Rajamouli introduces his dual leads efficiently, provides them understandable motivation for their journeys, and allots each sufficient yet not overloaded backstory. I’ve long thought — and still do think — Rao Jr. feels more like a comic relief side character than an action hero (think Sharlto Copley from District 9 [2009]), but he has good chemistry with Charan and their rivalry is the most interesting part of the movie. The lone downside to the story are the comical, cornball, cartoonish, caricatured (… oh shit, I dropped my thesaurus!) British villains, Ray Stevenson (Titus Pollo from Rome [2005, 2007]) and Alison Doody (Elsa Schneider from The Last Crusade [1989]) most of all. Their mustache-twirling villainy and the heavy-handed portrayal of their various henchmen are on par with the English royalty in Braveheart (1995), the Western mercenaries in Wolf Warrior 2 (2017), the US frontier military in Dances with Wolves (1990), and the space marines from Avatar (2009), so much so I couldn’t stop laughing when they were on-screen.

Aside from some shaky digital FX and the hamfisted execution of the British bad guys, though, RRR is as tightly scripted and well directed as most 3-hour Indian epics come. It takes lessons from Baahubali’s success and improves upon most of that seminal movie’s weaknesses, further diversifying the international appeal of Indian cinema through the linguistic and genre diversity of its southern region. While I still prefer the surrealist, mythical fantasy of Baahubali’s diegesis, I can’t deny the effectiveness of S. S. Rajamouli’s latest adventure, with its rich historical backdrop and efficient blend of location-photography, memorable song-and-dance, and contemporary action-spectacle.

SUMMARY & RECOMMENDATION: RRR utilizes an unconventional dual-lead structure to describe a classical anti-colonialist, revolutionary narrative with all the traditional South Indian cinematic embellishments you’d expect from a Telugu blockbuster. Its got good music, solid action (… when the bad CGI doesn’t get in the way), and pacing almost as good as 3 Idiots (2009).

— However… its digital FX, while not as prevalent as those in Baahubali, are still… not good, and its imperialist British villains are so corny without being interesting or fun to root against.

? Why didn’t Ram Charan just lower a rope to that kid surrounded by the flaming oil slick?