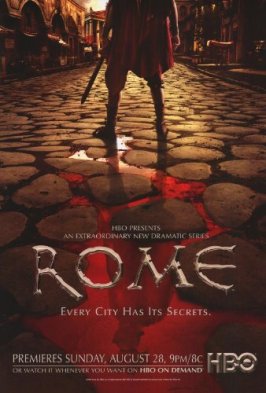 As readers may or may not have noticed, I have used my recent — and first ever — official HBO subscription to not only finish my favorite modern television drama, Game of Thrones (GoT, 2011-2019), but also to “check off” every high-profile Home Box Office property I’ve been meaning to watch (… i.e. stream shitty ripped copies from third-party sites) for years. I suspect my purchase of the premium channel (I stream the standalone service, HBONow) will be temporary, as opposed to my recent first-time subscription to Netflix’s online service, given the former’s impressive but comparatively small library and the finale of GoT. My favorite HBO shows all become Blu Ray purchases sooner or later, anyway, given the superior quality of physical media; when it comes to paid streaming services (e.g. HBO vs. Netflix), I guess quantity does trump quality… 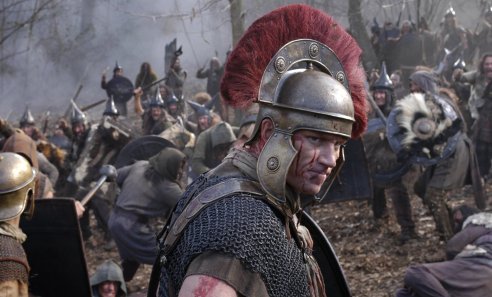 One television series I won’t be purchasing on physical media after terminating my HBO subscription, but am still glad I watched was Rome. Considered by many in retrospect to be a forerunner of the now world-famous GoT, Rome’s period-setting, political maneuvering, morally grey characters, and prolific sex and violence (the latter two now staples of the network’s most well known dramas) draw a clear line of influence to the GoT’s fantasy paradigm-shift a few years later. Legend has it that HBO even learned patience and budgetary restraint as a function of Rome’s financial excesses, which ultimately led to the series’ premature cancellation after two seasons.

As fate would have it, however, I argue Rome’s unplanned ending fits rather well with its second season’s conclusion in terms of principal character arcs and its historical subject matter. The show traces the history of Rome’s transformation from republic to empire, capturing the broad strokes of Gaius Julius Caesar’s civil war of 49 BC to the triumph of his adopted son/great nephew, Gaius Octavius Thurinus (later Augustus, the first Roman emperor), over Cleopatra and Marcus Antonius (Mark Antony in English) at the Battle of Actium in 31-30 BC. Season 2 ends with Octavius/Augustus having secured his power over the ruling political classes and become the de facto dictator of the Republic, thus ending official Roman democracy in all but name. The show compliments its historical figures (Caesar, Marcus Junius Brutus, Marcus Tullius Cicero, Octavia Thurina Minor, etc.) with mostly fictionalized Roman foot-soldiers Lucius Vorenus (Kevin McKidd) and Titus Pullo (Ray Stevenson) serving as audience surrogates to provide ground-level, working class (i.e. commoner) perspectives on the series’ political warfare.

From one perspective, Rome’s premature cancellation mirrors the abrupt end of Showtime’s Penny Dreadful (2014-2016), the major difference being co-creator and co-writer Bruno Heller handled his show’s cancellation far better. The series’ accelerated pacing during its second and final season is amusing but less noticeable than GoT’s comical “fast-travel” plot conveniences in the latter’s final seasons. Perhaps due to Rome’s showrunners having the benefit of 2000 years of hindsight to better pace their semi-fictional historical saga, the overarching narrative of Rome concludes on a satisfying note for all major characters and plot threads, including the aforementioned transformation of the titular nation itself. How the writers interweave McKidd and Stevenson into numerous critical plot developments verges on incredulity several times in both seasons, but their arcs are endearing and even play as clever winks to the viewer as near alternative-history or “what-if?” scenarios.

As for the show’s actual filmmaking, it is standard-fare cinematography and editing for HBO, which means it’s well above average for most of its twenty-two episodes. Most dramatic sequences are well paced, composed, and utilize the talented cast to emphasize physical acting and humor. The humor of Rome in general is strong, with most of it being visual and/or quite subtle, used in conjunction with subtle musical cues or near fourth-wall breaks from McKidd and Stevenson. Most of the show’s directors seem fond of subtle camera pans from character to character, which keeps the pace snappy and probably saved much time on set. The series also lacks noticeable long-takes or in-your-face editing flourishes like excessive flashbacks or jump cuts, giving this show a classical rather than New Wave visual style. This traditional cinematographic style is in stark contrast to the show’s unapologetic HBO content, i.e. its over-the-top violence and sexuality. Still, that explicit subject-matter feels less obnoxious than many similar HBO dramas given the historical diegesis’ laissez-faire attitude toward, say, orgies and gladiatorial combat. Rome’s direction of photography not calling attention to itself helps this historical point-of-view. 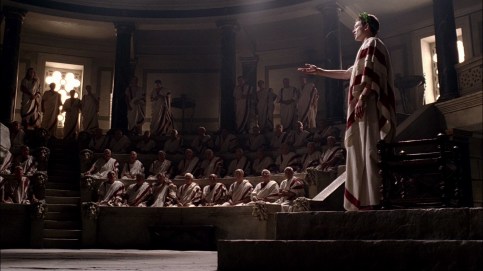 Altogether, Rome succeeds as either an extended mini-series or abbreviated long-format television show summarizing the transition of its namesake from republic to empire. Its colorful historical source material provided the basic ingredients many larger, better shows would emulate, none more famously than fellow HBO series Game of Thrones. Its visual storytelling avoids the self-reflexive editing and flashy oners of those descendants, however, and this particular show is better for it given how dramatic this period of retold history was. Rome will be remembered more for the lessons HBO learned making it, its quiet, indirect legacy, than its direct impact on modern pop culture. Given its principal characters’ wry sense of humor and blunt yet fun approach to sex and violence, though, Rome is always worth appreciating regardless of its louder, prouder HBO cousins.

SUMMARY & RECOMMENDATION: Rome was the sprawling, fantastical, larger-than-life epic of which HBO was capable before the network even knew it. Though its time was cut short like many promising shows before it, the show’s restrained yet charismatic cinematography prevents its hypersexual and ultraviolent content from growing densensitizing, and endows its memorable historical inspirations with creative wit, humor, and likable characters. Even its minimalist soundtrack has personality to it.

— However… pacing issues are noticeable in Season 2’s jam-packed storyline. Kevin McKidd and Ray Stevenson, technically the series’ leads, require suspension of disbelief for their characters to influence so many crucial historical outcomes.

? Listen, about your father…