If you’re a Westerner and have seen any Indian movies at all, you’ve probably watched a Bollywood film, and if you’ve watched any Bollywood film, then I’d bet money that one was 3 Idiots. Rajkumar Hirani’s higher education coming-of-age dramady remains one of Indian filmmaking’s modern classics, an emotional analysis of South Asian college life and the maturation of this latest Indian generation.

The majority of the movie is told through flashbacks, with the present day framing device serving as the connecting tissue between these segments and the premise from which the story unfolds. 3 Idiots balances the sobering drama of young adult angst and the whimsical comedy inherent to most Bollywood features better than most of its industry. There are few tonal clashes between the occasional suicide threat and satirical jabs at Indian higher education, given how intertwined these themes are from the beginning. In doing so, 3 Idiots avoids the self-serious, tonal inconsistencies to which films like Rang de Basanti (2006) and even Dilwale Dulhania La Jayenge (1995) succumb. 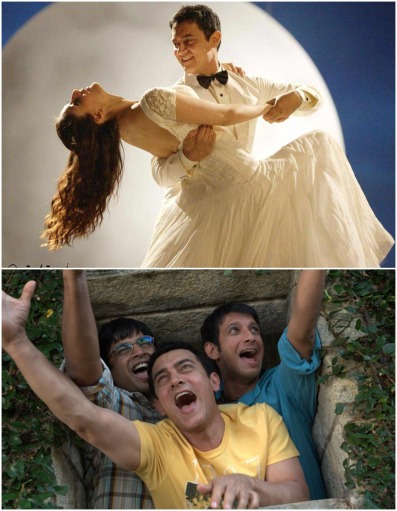 The obligatory romance is sprinkled in as required, but the backbone of the story is the friendship between the titular “idiots.” The majority of the drama surrounds two of the three friends, R. Madhavan and Sharman Joshi, who attempt to discover what happened to the long lost third member of their group (Amir Khan). 3 Idiots’ trio of major characters are memorable, yet never quite reach the point where they feel like deep personalities we have gotten to know inside and out for almost three hours. It’s a shame, because when 3 Idiots is at its best, it’s a force of cinematic and musical ambition to be reckoned with. While we follow Madhavan and Joshi’s characters throughout the whole story (Madhavan is the narrator), we never get to know them in an intimate way, though we do understand their motivations and modest arcs.

As for the star of the show, Khan’s role is explored solely through flashbacks, which is well over two hours of the film’s near three-hour running time. He is the main focus of the story, but is at times hard to relate to given how his character is more or less a super-genius. In the engineering campus where much of the story takes place, Khan is a math whiz, aces all his tests, places at the top of his class every year, and is basically loved by all. Or, I should say, almost all. Khan’s only true obstacle to overcome, as his friends point out, is his nervousness regarding his crush, played by Kareena Kapoor, who holds her own as the main love interest, though she has little to do.

The only part of the film I flat-out did not like was the blackout-delivery scene, where the three friends have to deliver Kapoor’s sister’s baby during the middle of a thunderstorm, which causes the power to fail. Why do women always pick the worst times to go into labor in movies? This scene is so sloppy and lazy it made my eyes roll into the back of my skull. The sequence’s cliched dilemma and implausibility make this part of the film stand out from the rest of the narrative like a sore thumb. The purpose of the scene is for Khan’s character to reconcile with his antagonist, Boman Irani, but I find it hard to believe the filmmakers couldn’t have thought of a less cheesy scenario. This is the lone sequence in the movie that descends into stereotypical contrived Bollywood melodrama.

Omi Vaidya and Boman Irani play the academic rival and hard-nosed college dean, respectively, providing tons of hilarious moments and acting as the butt of many clever jokes throughout the film. Ironically, these characters are more believable than our protagonists. They are also far more integral to the film than at first glance, and are the main sources of conflict for all three of our heroes. Because of this, 3 Idiots would have been a much lesser film without them.

Apart from the acceptable character arcs and the narrative’s ultimate conclusion — the latter of which is extraordinarily satisfying, all things considered — 3 Idiots hits the head on the nail everywhere else. The cinematography, starting with majestic, free-flowing aerial shots during the film’s opening scene that echo our main character’s free spirit, makes the film feel alive and gives it a sense of style. Almost every shot in the film has a dash of pizzazz and makes seemingly ordinary conversations interesting and cinematic. The film’s editing, top to bottom, is diverse, smart, and stylized.

I was further pleased at the cast’s lack of overacting, and how the film was virtually devoid of the melodrama that weighs down many Hindi movies. Meanwhile, the film’s musical elements are outstanding and perfectly captures the youthful mood of the story. The set-pieces are more comical and fantastical than they are aesthetically beautiful, but again, this style fits with the overall theme of the narrative.

Having fun, idiots? Much of the location-shooting in 3 Idiots is fantastic. The movie’s final scene (shown here) was shot in Ladakh, an especially scenic region of Jammu and Kashmir.

3 Idiots is significantly more than the sum of its parts. I am a picky guy when it comes to character likability and believable dialogue, as you can tell, but I thought 3 Idiots succeeded on far more fronts than it failed. It has several glaring errors, and one distractingly bad scene, but overall, the story comes together in a heartfelt way. Strictly speaking, it may not be an outstanding film in every respect, but it is a highly entertaining and tonally diverse adventure that doesn’t feel artificial or pandering. 3 Idiots should be commended for its impressive technical achievements and effective storytelling that make it a great package. The timelessness and timeliness of its social commentary further adds to its enduring legacy. This is arguably the most rewatchable 3-hour movie ever made.

SUMMARY & RECOMMENDATION: 3 Idiots boasts an effective, nuanced screenplay, as well as a wide range of likable characters. Rajkumar Hirani presents his best directorial effort to date, using everything from sweeping aerial footage to hilarious transition-shots to even animation to imbue his narrative with unforgettable visual style and personality. It’s an ensemble effort that produces one of Bollywood’s most readily enjoyable modern classics.

– However… none of our heroes are quite believable. Despite their dedicated performances, R. Madhavan and Sharman Joshi’s co-leads aren’t the most interesting characters. The delivery scene sucks.

? How many times has Irani played the same exact character in a movie? There’s type-casting, and then there’s playing identical-in-all-but-name characters across different films…