I haven’t watched a single Sanjay Bhansali film I haven’t liked. To be sure, I wasted my time with one of his highest profile producer credits, Mary Kom (2014; directed by Omung Kumar and funded by Bhansali Productions), and have little interest in his more dramatic, awards friendly movies from the middle period of his career (e.g. Black [2005], Saawariya [2007], Guzaarish [2010]), but his best features (e.g. Hum Dil De Chuke Sanam [1999], Devdas [2002], Bajirao Mastani [2015]) are some of my favorites in all of Indian cinema, representing the pinnacle of the modern film musical. His directorial style is what I most often think of when I picture the glitz, glamour, and cinematographic aura of South Asian film generally, and his filmography is what I most recommend to newcomers to India’s various film industries, even more so than the popular works of, say, Aamir Khan (e.g. Lagaan [2001], 3 Idiots [2009], Dangal [2016]) or the fantastical heights of South Indian action movies (e.g. Baahubali [2015, 2017]). 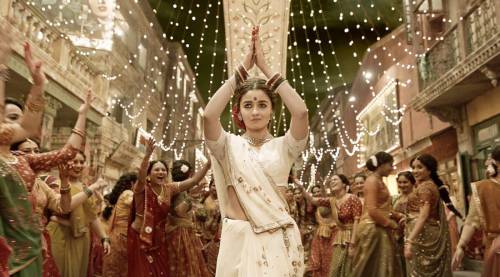 Things brighten up, both literally and figuratively, in the film’s second half as Bhatt’s protagonist asserts control over her community.

Enter Gangubai Kathiawadi (henceforth, GK), the man’s latest directorial effort and first true biopic about a near contemporary figure, in this case the real-life Bombay (Mumbai) prostitute turned brothel madame turned social activist of the same name. Sold into prostitution from an educated family in the first half of the 20th century (born Ganga Harjeevandas, date unknown), Gangubai’s transformation from a victim of the sex trade to a leader of and political lobbyist for sex workers in general is a classic underdog story of upward social mobility ripe for cinematic adaptation. Bhansali, who also co-write, co-produced, co-scored, and edited the film, follows The Social Network (2010)-model of adapting his true story’s initial literary summary (Accidental Billionaires [2009] by Ben Mezrich was adapted by Aaron Sorkin for The Social Network; a chapter from Mafia Queens of Mumbai [2011] by Hussain Zaidi was adapted by Bhansali and Utkarshini Vashishtha for GK) rather than attempting documentarian accuracy for the sake of narrative structure and cinematic merit. Though it runs a bit long in the tooth at 154 minutes and suffers from the lack of narrative causality that plagues all biopics, GK’s foundation atop Bhansali’s balanced direction elevates it above the lion’s share of boring Oscar-bait pictures about important historical figures.

The secret sauce to GK is not Alia Bhatt’s lead performance as most critics or the film’s marketing campaign would have you believe — she’s fine in the title role, of course — but rather GK’s overarching story structure, its modest yet stylized diegesis, and its occasional cinematographic flourishes. For one, GK neither progresses in a straightforward, linear fashion from its protagonist’s innocent beginnings, subsequent fall into sexual slavery, then rise to control, nor does it begin in media res with Bhatt’s protagonist recounting the entire main storyline after the fact. GK instead blends these two formats whereby the audience is introduced to a random, newly kidnapped underage prostitute (uncredited) and her “initiation” into the sex trade, who then meets an established madam Bhatt after her refusal to cooperate. Bhatt then recounts her tragic backstory over the first act, concluding with an ultimatum for the newcomer. The remainder of the film takes place in the then “present day” 1950s-1960s, wherein Bhatt transitions from somewhat ethical brothel leadership to political activism as she runs for presidency of her local neighborhood.

This unconventional screenplay maintains unpredictability despite the story’s overall formulaic biopic content, divides the story into three distinct acts, and modulates narrative pace. What makes GK stand out not just from other biopics but from most contemporary historical dramas, however, is Bhansali’s attention to visual detail across both mise-en-scène as well as camerawork. The blocking, set, costume, and hair-and-makeup design in all Bhansali films I’ve seen are great, but GK’s physical backdrop is memorable in subtler ways than the filmmaker’s most over-the-top productions like Hum Dil De Chuke Sanam, Devdas, or Padmaavat (2018). GK limits its number of locations to a couple outdoor street sets and several indoor brothel rooms, balconies, and corridors, emphasizing quality in its mid-20th century period details over quantity of scenery. Furthermore, GK’s effective combination of physical sets and digital composite backgrounds is superior to most big-budget throwback Indian dramas perhaps as a function of that production discipline.

In GK’s depressing first act, Bhatt is instructed on the proper pose (top) of sex workers in a Bombay red light district (bottom).

As far as cinematography is concerned, longtime Bhansali collaborator and director of photography, Sudeep Chatterjee, utilizes an eclectic combination of slow-motion photography, subtle tracking shots, and creatively blocked dialogue sequences to emphasize character mood over plot mechanics or showy cinematic violence. The film’s morose, earthy color palette and soft lighting fit both the story’s downtrodden content as well as the monotony of much of Bhatt’s lifestyle. Only when the story progresses into its latter half does the pace quicken and the lighting diversify once Bhatt channels her personal growth into external action for the good of others, demonstrating how her character’s arc has inspired good in the community around her.

Sanjay Bhansali understands that a great biographical film, like any film, is defined not by its historical subject-matter but by the manner in which that subject is structured, captured, and edited. He channels his filmmaking strengths that fit this type of project, namely his attention to period detail and his cinematographer’s heightened visual realism, while downplaying his filmography’s characteristics that would be inappropriate in this context, such as the energetic camerawork and illustrious dance numbers of his most elaborate musical epics. If there was anything in Gangubai Kathiawadi that disappoints, it would be the modesty of its musical set-pieces and the reserved, realistic performances of its cast when I was bursting with anticipation for the over-the-top Bhansali melodramas of old; but that wouldn’t have fit the story he succeeded in telling here.

SUMMARY & RECOMMENDATION: Subtler, quieter, and sadder than Bhansali’s most charismatic epics yet still with the period flavor, visual flair, and diversity of camerawork characteristic of his best works, Gangubai Kathiawadi concentrates on narrative structure as much as character study so the greater film is as interesting as its eponymous figure. It also boasts enough musical diversity to complement its cinematography without distracting from it.

— However… lead Alia Bhatt and the rest of the cast give serviceable performances (e.g. Shantanu Maheshwari, Vijay Raaz, Ajay Devgn), but nothing that elevates their characters to larger-than-life figures or complex, multilayered human beings.

? It sure is fortunate Gangubai ran into that benevolent, progressive journalist (Jim Sarbh) at the same time she confronted those prejudiced Catholic school officials.