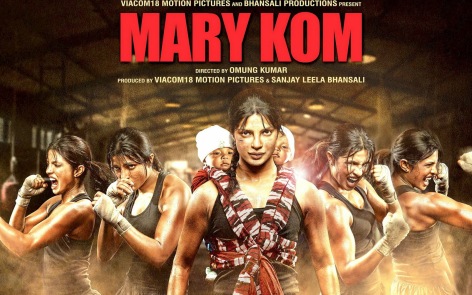 As noted in earlier reviews of mine, the major Hindi-language studios of Bollywood have made increasing attempts to elevate Indian athletic achievements in recent years. The 2001 hit that was Ashutosh Gowariker’s Lagaan arguably spawned the modern wave of high-profile Hindi sports dramas, including everything from Chak De! India (2007) to Bhaag Milkha Bhaag (2014) to M. S. Dhoni: The Untold Story (2016) to Dangal (2016), the latter of which is currently the highest grossing Indian film of all time. Of those successful blockbusters, it is perhaps further significant that only one, M. S. Dhoni, is about cricket, far and away the most popular sport south of the Himalayas, and the lone major athletic event in which India is routinely competitive, if not dominant on the world stage.

Mary Kom, which follows the professional athletic career of one Chungneijang Mary Kom Hmangte, is similar in format and thematic content to the later Aamir Khan-vehicle, Dangal. Both films envelope their solo athletic events in somewhat interesting gender dynamics (e.g. patriarchal societal norms, sexism, women’s empowerment in sports, etc.) and much less interesting patriotic overtones, sticking to genre formula where appropriate and relying on their stars’ charisma to elevate that formula. However, where Khan’s presence and Nitesh Diwari’s direction elevate the 2016 wrestling drama to the point where even non-sports fans can enjoy it with little to no effort, Mary Kom’s (henceforth, MK) lead performance by Priyanka Chopra and directorial execution by Omung Kumar leave much to be desired.

MK concentrates most of its narrative in its eponymous athlete’s native state of Manipur, one of India’s most isolated jurisdictions that lies west of Bangladesh and the Siliguri Corridor. Despite a few nods here and there to various separatists movements common to the region, the film skirts around its otherwise fascinating sociopolitical backdrop for a more standard-issue underdog story about Mary Kom’s (Priyanka Chopra) rise, career hiatus to start a family, and return to professional competition. This generic formula works fine for most sports dramas (again, see Dangal), but director Kumar’s vision of this biopic framework is flawed. For one, the entire first half is a complete mess: The pacing feels rushed, the portrayal of Kom’s childhood is comical and poorly staged, and Kom’s rise to athletic prominence feels truncated, haphazard, and unearned. Minor obstacles like Kom’s father (Robin Das) disapproving of his daughter’s athletic career are raised and dismissed with such little fanfare one wonders why they’re included in the film. Much of Kom’s development in the first act concerns her training in a local boxing gym and earning the guidance of Nepali actor, Sunil Thapa, a relationship critical to the story that is skimped over with inappropriate montage sequences and hamfisted dialogue.

To that end, MK has systemic weaknesses that affect the entirety of its narrative, most of which are a function of Kumar’s lackluster direction or lazy editing. Chopra’ aforementioned relationship with Sunil Thapa, effectively ruined by misguided editing, is an example of the film’s complete inability to utilize training montages, a classic sports drama trope, to its advantage. These montage sequences feel like they were either (a) constructed after the fact to salvage complete scenes that didn’t work on their own, or (b) pre-planned from the beginning to abbreviate a longer script due to a limited budget. Either explanation feels plausible given the final cut’s short running time (122 minutes) for a Bollywood picture (mainstream Hindi films are often 150-180 minutes). Other consistent problems include the movie’s dull boxing matches, which feature poor choreography and chaotic handheld camerawork often in close-up or medium shots to mask that choreography. Chopra’s overall performance is disappointing, though her dialogue and Kumar’s acting-direction probably weren’t doing her any favors; her sloppy boxing technique and lack of screen presence in those aforementioned boxing matches, however, are baffling and beg unfavorable comparisons to, say, Michael B. Jordan’s convincing portrayal of a professional athlete in Creed (2015, 2018).

The best that can be said of MK is that it is not a complete disaster. Chopra’s relationship with co-star and on-screen husband, Darshan Kumar, has the heart and emotional payoff that’s lacking in the former’s relationship with Thapa, for one. For another, the story ironically picks up steam once Chopra pauses her athletic career to marry and start a family. The movie’s breathless pace slows down for a minute to allow Chopra to emote and her character to develop, letting her wallow in self-doubt and financial stress so that her eventual decision to not only return to boxing, but to excel at it once again, feels earned and therefore satisfying. Because the film puts effort into showing the sacrifice its protagonist must endure in athletics as a mother, I found myself caring far more about the “mom-empowerment”-angle of the last forty-five minutes than the generic, abbreviated, slap-dash underdog championship story of the first hour. It’s too bad both halves end with lame boxing matches about as frustrating as Mile 22’s (2018) shaky-cam fistfights.

Contrary to what one would expect, Mary Kom’s boxing matches are lazily choreographed, poorly filmed, and toothless.

Priyanka Chopra is one of my favorite Bollywood actresses for her considerable range, great looks, and impressive dancing skills. However, Mary Kom lets her down with a role that barely tests the former and doesn’t engage the latter. My hopes were raised at the sight of Sanjay Bhansali’s lead producer-credit, but it’s clear this film is based on the visions of screenwriter Saiwyn Quadras and director Omung Kumar, whose debut work here is disappointing and whose careers since (Quadras wrote the screenplay for Neerja [2017] and Kumar directed Sarbjit, [2016], Bhoomi [2017], and PM Narendra Modi [2019]) haven’t fared much better.  Due to its rushed story, sloppy direction, and an unconvincing turn by Chopra in the titular role, Mary Kom is a snoozer of a sports biopic.

— However… the film turns things around once Chopra’s motherhood role comes into play, a topic around which the entire film should’ve centered. Darshan Kumar’s romantic subplot is effective and an integral part of Mary Kom’s overarching narrative, which shocked me.

? I get that the boxing glove she found when she was a kid “inspired” her love for fighting, or whatever, but why would an adolescent ever wear that in a street-fight?