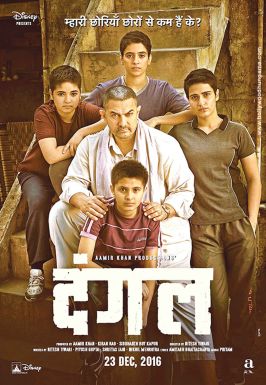 Though China makes bigger waves from its homegrown blockbusters and their increasing budgets, impressive production values, and controversial propaganda, their comparable neighbor to the south has a much older, far more prolific history of filmmaking in general, and blockbuster filmmaking in particular. Bollywood, or the mainstream Hindi cinema studios concentrated in Mumbai (Bombay), is the most famous of multiple high-profile film industries within the Indian subcontinent. It, like Hollywood but unlike much of Chinese cinema, maintains a large international following beyond non-resident ethnic nationals.

One of the most prolific stars within the most profitable industries of the most productive national film culture on the planet is Aamir Khan. Among the twenty-five highest grossing Indian movies of all time, Aamir Khan’s name graces at least a fifth of them as either a producer, a star, or both (e.g. 3 Idiots [2009], Dhoom 3 [2013], PK [2014], Secret Superstar [2017]). His current top grossing hit, as well as the current (as of summer 2019) box office champion of Indian cinema three years after its release, is Dangal (English literal translation: Wrestling Competition). Loosely based on the Phogat freestyle wrestling family who rose to international prominence in the 2010s, Dangal blends multiple sociopolitical topics popular with modern South Asian audiences, including underdog athletics, coming-of-age stories, parental legacy, and gender dynamics, all spearheaded by one of the most consistent, popular leading men in South Asian cinema.

Left: Aamir Khan stars as the patriarch of a fabled wrestling clan, Mahavir Singh Phogat, rebuilding his professional legacy through his daughters. Right: The eldest of those daughters, portrayed by Fatima Sana Shaikh (right), competes at the national level in the film’s second act.

Co-writer-director Nitesh Tiwari is somewhat new to the Hindi blockbuster scene, having made his directorial debut in 2011 with the moderate comedy hit, Chillar Party. Dangal remains his lone international success, but if the reception to it is any indication, he will attract blockbuster scripts and starring leads well into the future. He does a good job, overall, with this scrappy yet sentimental athletic drama, setting the majority of his production-design in rural villages in Punjab and Haryana, and making good use of outdoor lighting, naturalistic mise-en-scene, and memorable location-photography. This being a sports drama, Tiwari acknowledges the effectiveness of montage sequences (Rocky IV [1985], anyone?), and gives us half a dozen of them throughout the film. Some montages are in slow-motion, others utilize stylized jump-cuts, and most all of them are set to a pulsating Hindi soundtrack.

The best aspects of Tiwari’s direction are without a doubt his wrestling sequences, particularly in the first two acts when they’re not paired with redundant color commentary. The wrestling matches feature great choreography and gritty sound FX, and the ones in rural settings take advantage of their environment’s elemental character (e.g. slow-motion dirt, dust, and wind mixing with human sweat). Tiwari also cross-cuts between different sequences to enhance their emotional power, such as intercutting two starring characters’ opposite performances at different wrestling matches to highlight their disparate work ethic. Another example includes a character receiving conflicting strategic advice from different mentors, implying a rise in dramatic stakes as well as creating humor through editing.

The best parts of Dangal’s narrative, however, have to do with the core relationship between Aamir Khan as Mahavir Singh Phogat and his character’s two eldest daughters, Geeta and Babita Kumari Phogat, played by Fatima Sana Shaikh and Sanya Malhotra, respectively. They’re the heart of this story, and you feel genuine affection for them as they push each other away and pull themselves together as families most always do. Shaikh’s arc in particular feels rewarding because the film dedicates the most screentime to her athletic accomplishments and complicated relationship with her father (Khan), though I wish the film focused more on her relationship with Malhotra as well.

The film’s weaknesses can’t hold a candle to how entertaining and upbeat the movie feels as a whole, but its direction and script have enough problems to limit its emotional impact. For one, Dangal boasts numerous tiresome cliches common to most international blockbusters, including several cornball, melodramatic speeches where the background music swells, multiple characters explaining other characters’ backstory or motivations via on-the-nose dialogue, a pointless narrator (Aparshakti Khurana, Ritwik Sahore), unnecessary voiceovers, and nonstop cutaways to supporting castmembers during critical set-pieces. My least favorite part of the entire movie is a lame subplot involving Girish Kulkarni as an Indian National Sports Academy (NSA) coach, a minor yet comical mustache-twirling villain who butts heads with Khan regarding his daughters’ training regime. I liked the conflict between Shaikh and Khan that relates to the former’s transition to the NSA lifestyle, but manufacturing drama from silly, pointless sequences like Kulkarni locking Khan into a janitor’s closet at the film’s climax is contrived as hell. Excising Kulkarni’s entire character and subplot would’ve saved the movie a much needed fifteen minutes. 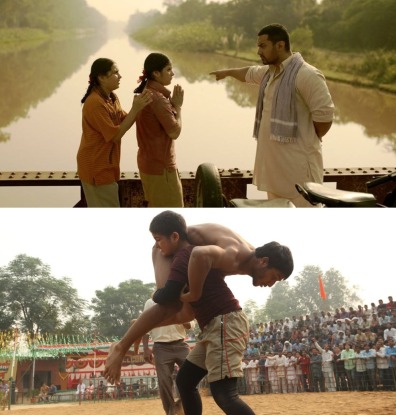 Overlooking those significant problems, however, Dangal is yet another installment in its home country’s growing library of memorable sports dramas, including Lagaan (2001, another Aamir Khan vehicle), Bhaag Milkha Bhaag (2013), and Mary Khom (2014). This is notable for the second largest — soon to be the largest — country in the world, a country that boasts the world’s largest film culture by feature-length theatrical releases, yet has achieved little international success in professional sports outside of cricket. No doubt movies like Dangal aspire to change that fact, but as a movie unto itself, Dangal’s cinematic merit is more par for the course than groundbreaking. That being said, Dangal’s entertainment value makes it an easy recommendation for fans with zero interest in wrestling or women’s athletics, and that appeal is a good sign of a successful sports drama.

SUMMARY & RECOMMENDATION: There’s little novel cinematic merit here that will surprise longtime fans of Aamir Khan’s dynamic career, and in some respects that’s a good thing given his production company’s track record. The screenplay’s real-life material is powerful, as are the main characters of Dangal’s Phogat wrestling clan. Co-writer-director Nitesh Tiwari leans heavily into traditional sports movie conventions like training montage sequences, stylized choreography, and an upbeat soundtrack, and most of it works.

— However… Dangal’s pandering to mass audiences can’t be helped, given its heavy-handed dialogue, cornball monologues, and a superfluous antagonist. Also, stop cutting to audience characters who don’t matter in the middle of pivotal set-pieces.

? How about a sports movie where the protagonist’s motivation is winning for themselves, rather than their family or “national pride?” At least in movies about solo sports…