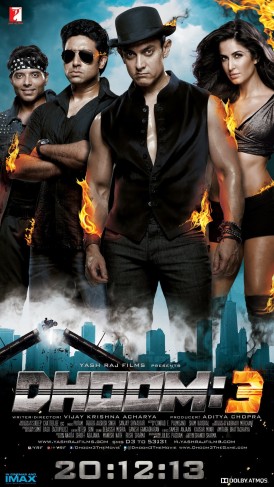 Much like another Aamir Khan blockbuster, Ghajini (2008), Vivay Krishna Acharya’s take on the second Dhoom sequel draws obvious parallels to Christopher Nolan’s filmography. The Chicago-set chase sequences and superhero persona of Khan’s lead echo Christian Bale’s Batman escapades in The Dark Knight Trilogy (2005, 2008, 2012), and even more conspicuous similarities exist between the film’s running magician motif and major narrative twist and The Prestige (2006). The fact that in no other film industry on the planet could such blatant and obvious copyright infringement exist amuses me to no end. The Bollywood film industry is well known for its liberal borrowing from other national film stables, often without official licensing. Personally, I don’t mind this trend, although Hindi filmmakers blur the line between paying homage to and ripping off other films, because I for one find “reinterpretations” of narratives in different cultural contexts entertaining.

As is standard in Indian action films, Dhoom 3’s chase sequences, motorcycle duels, and fistfights are terrible. I’m sure that Dhoom 3 (henceforth D3) and films like it are purposely silly on most if not all occasions, and Hindi films in general seem discontent with taking themselves seriously, but there comes a point where a movie’s self-awareness can no longer excuse its laziness. D3 runs way past this point and then some. With that said, no one in there right mind expects much from Bollywood action scenes to begin with, because the main focus of the industry is on musical numbers, not fistfights or car chase sequences. It doesn’t matter that much how D3 violates the laws of physics like a Japanese cartoon or that brick walls now have the resilience and hardness of Lego blocks. In light of this, I’m not knocking the movie too much for its utterly ridiculous “action” scenes.

What’s more of a problem for D3 are large portions of its dialogue, several irritating characters, and annoying directing decisions. Most every line uttered by the non-Indian actors is hilariously bad and makes you wonder if the studio even bothered to hire actual American actors or just flagged down random white people off the street. Things reach the pinnacle of screenwriting excellence when the film’s main villain, a laughably eeeeevil banker, asks a policewoman from Chicago PD’s “intelligence division” who’s robbing him, to which she replies, “It’s a thief, sir.”

Things get even more annoying with the series’ recurring sidekick, Ali Akbar, played with tiresome enthusiasm by Uday Chopra (brother of producer, Aditya Chopra). I don’t care if the character is meant to be annoying or not (why would you want a character who is so irritating in your movie, anyway?), Akbar’s character is as dumb as the dumbest lines in this movie, and every oh so “hilarious” fantasy scene with him fondling beautiful women gets more pathetic than the last. Chopra’s role serves no logical purpose whatsoever other than to give Abhishek Bachchan’s character a twenty second pep talk in one scene. Bollywood’s relentless obsession with irritating, unnecessary “comic relief” (I can’t put enough quotes around those words) characters that serve no purpose in their movies (e.g. Rajesh Vivek in Lagaan [2001], numerous characters in Kuch Kuch Hota Hai [1998]) baffles me to no end. Do Indian viewers actually find these people funny? 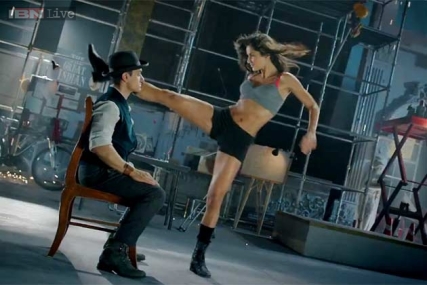 A couple final irritating things about D3 have to do with overzealous design choices. I’m not sure who exactly to pin these mistakes on, but it’s probably the director who’s to blame. The film uses far too much slow-motion and background music, especially early on in the film. Characters move in slo-mo when they turn around or put on a hat, for Christ’s sake, and combined with the excessive background scoring, the movie feels like it’s trying way too hard to be hip and cool, or perhaps working too hard to be like a big-time Hollywood blockbuster.

With all this against it, is D3 worth watching? I don’t think it’s hard to believe that, yes, D3 is worth sitting through given how most Bollyood films have similar problems with dialogue, bad acting, and poor action and are often still quite entertaining. I frankly don’t understand so much of the negative backlash the film has received. Most criticisms have to do with the film’s bad acting, cheesy dialogue, and poor action scenes (which I just criticized, myself), but people knocking the film so hard on these features makes little sense given how symptomatic these problems are of pretty much every Bollywood hit ever made. Most of D3‘s lines are cheesy, I agree. Much of the acting is bad, too. But have you guys seen Dilwale Dulhania Le Jayenge (1995)? Munna Bhai: MBBS (2003)? Kuch Kuch Hota Hai? Indian critics giving D3 a hard time for faults like dumb lines and bad acting is necessary, but holding those mistakes over its head like they’re unforgivable sins in light of how so many lauded, universally beloved classics of Bollywood share the exact same problems is hypocritical in the extreme. Katrina Kaif’s character is nothing more than a sexual object without any personality, is cast simply for her looks, and a cardboard cutout could play her role — have you not seen 95% of all Bollywood movies with plot-devices known as “item numbers?”

More importantly, D3 has good things going for it that make up for its annoying supporting characters and cringe-inducing dialogue. Call me crazy, but D3 may feature some of Aamir Khan’s best work to date. Not only does he play two completely opposite characters, but he plays them both well. Khan’s highbrow performance is consistently what lifts this film above water despite all the questionable casting, laughable lines, and pathetic action sequences. The man knows how to play a cool guy (as well as a sympathetic underdog), and unlike Ghajini, isn’t restricted by playing a stoic, scowling weirdo half the time.

The other main part of the movie’s charm comes from a predictable source: The song numbers. Characteristic of the best Bollywood has to offer, D3 astounds with nearly every setpiece. These are the real action scenes, not the laughable motorcycle fights. Aside from the uninspired “Kamli” demonstrated by the equally uninspiring Kaif, D3‘s soundtrack and dance choreography are huge strong points for the film. While some Bollywood films may have better songwriting (e.g. Dil Se [1998]) or more impressive choreography (e.g. Devdas [2002]), few other Bollywood film that I’ve watched have a better overall combination of the two. D3‘s musical numbers are absolute spectacles, from the slick opening tap-dance sequence, “Dhoom Tap,” to the illustrious “Malang” to the endlessly catchy “Tu Hi Junoon” to the suave, stylish series song, “Dhoom Machale Dhoom.” D3 fires on all cylinders from a musical standpoint. 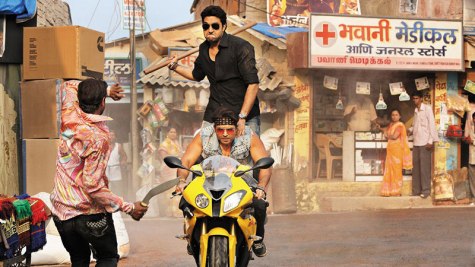 Abhishek Bachchan and Uday Chopra fight bad guys in the traditional Indian fashion. Newtonian physics mean nothing to them.

When you add all this up, both the good and the bad, Dhoom 3 ends up being a decent blockbuster in my opinion. It has its fair share of dumb dialogue and bad or underdeveloped characters, but at the end of the day, Dhoom 3‘s faults are no worse than many of the industry’s most popular and universally well-received films. And to that end, the film is capable of making up for its weaknesses by delivering outstanding musical numbers and a main character who is interesting. Is it a great film? Not by a long shot. But you could do much worse for Bollywood spectacle by my calculations. It’s big, it’s loud, it’s dumb — it’s dhoom. What more do you want?

SUMMARY & RECOMMENDATION: Aamir Khan gives a strong performance as not one, but two main characters. He is the King of Bollywood for good reason, with both charisma and style to match. With his help and that of several musical numbers that are way too classy for this lowbrow story, Dhoom 3 succeeds in at least being very, very fun.

— However… too many lines are just too dumb, though to be fair it’s not that laughable by Bollywood standards. Uday Chopra’s role made me want to kill myself. The film’s overuse of slo-mo and background scoring is truly excessive. I cannot put into words how stupid the action sequences are. One can only imagine how good this movie could have been if the filmmakers had decided to drop the cheese for a moment and take them seriously.

? Does anybody else find it amusing how unceremoniously Bachchan’s character (the original film’s main character and the only recurring series role other than Akbar) is shoehorned into the corner in favor of the far more marketable villains in both Dhoom 2 (2006) and Dhoom 3?