Awful performances and partially effective storytelling come to an awkward head in this long, star-studded Bollywood “Hit” about friendship, college romance, and (surprise surprise) love-triangles. This movie possesses some of the most painful and cringe-worthy moments I have seen put to film. The overly goofy and awkward dialogue, combined with the incredibly cheesy, over-the-top performances from actors Shah Rukh Khan (SRK) and Kajol to Rani Mukerji and Salman Khan to Anupam Kher and Archana Puran Singh, all the way to the stage dancers, make Kuch Kuch Hota Hai (henceforth, KKHH) feel as downright offensive to my intelligence as this run-on sentence. 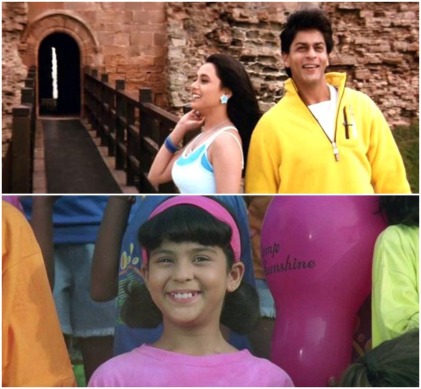 Top: Aside from a typically colorful Bollywood-palette, Kuch Kuch Hota Hai brings nothing recommendable to the table. Nothing in its standard-issue romance justifies its 3-hour+ runtime. Bottom: The film’s hair, makeup, and costume design are almost as ridiculous as the acting. Case in point: This picture of the “oh so adorable” Sana Saeed.

But I digress… this movie’s really about love, right? And what love there is, in this boring, impotent plot. KKHH is based on the love-triangle formed by its three central characters, played by SRK, Kajol, and Mukerji, who meet during college. Needless to say, many things go awry, volatile emotions are stirred, relationship intentions are misunderstood, people die, and it all ends in another long, drawn-out wedding elopement climax. It’s like a logical computer program wrote the screenplay.

It’s interesting to dig beneath the surface of movie-magic and story formulas to see how, like organisms of an ecosystem, films from different genres and separate cultures are often far more closely related than we realize. Comparing KKHH and, say, The Expendables 2 (2012), you have two films that are paced very badly, that go way overboard with their cringe-inducing dialogue and bad jokes. Just like KKHH should have tried to cut its losses by skimming on the melodrama and designing less boring dance numbers, Stallone’s lazy-as-hell ensemble sequel should have focused on delivering the bone-crunching action it promised, instead of giving us an hour of roid-fueled ’80’s has-beens pretending to be dramatic actors. KKHH is the South Asian equivalent of a bad American action-movie, swapping the sleep-inducing action scenes for disorganized dancing, but keeping the bad acting.

Perhaps a better way to describe KKHH is to imagine the famous Dilwale Dulhania Le Jayenge (1995), also starring SRK and Kajol, but without the beautiful outdoor photography, the fun musical numbers, and replacing every ounce of Khan’s charm in that role with an irritating cartoon. In fact, an effective way to describe everyone’s character in this movie is as a cartoon. Even if this exact script was shot as an animated film, it would remain irritating and boring, but at least it would be bearable. As a live-action experience, though, KKHH is like attending the birthday party of a younger extended family member whom you hate, like a bratty niece or second cousin. You’re constantly surrounded by people in ridiculous outfits who say ridiculous things in a ridiculous way, and everyone is under the constant illusion that they’re cute or adorable. Are you formulating a tone in your brain, yet?

I would honestly put the level of acting and emotional expression in this movie on the same level as a bad Nickelodeon show or a particularly annoying episode of The Young and the Restless, maybe with all the subtlety and nuance of a Dragon Ball Z show. At least with any of those programs, the pain is over in about 22 minutes, but with KKHH, I had to sit through over three hours of these caricatured performances.

The film’s childish set-design feels almost as caricatured and fake as the performances. Everything from the film’s costume design to the hair and makeup feel like live-action counterparts of an outlandish children’s cartoon. To the film’s credit, the colorful design of everything is nice, but it’s hard to appreciate much of the film’s technical design when everything about the story and direction feels so bizarre and artificial. KKHH’s visuals make me think of a snack drenched in food coloring and made of unnatural ingredients — something that looks processed, sterile, and manufactured on an assembly line. The movie looks as dumb as it sounds.

What do I have to say that’s positive about one of the King Khan’s and Kajol’s most famous, commercially successful smash hits? Well, not much. What I do like about KKHH is the effective use of flashbacks to make it one of the few Bollywood films that justifies its two-act structure. The songs are decent, I guess. That’s about it.

Just like any other film industry, Bollywood has its grossly overrated super-hits. This is one of them.

What else is there to say? I feel like I’m already repeating myself. Kuch Kuch Hota Hai, one of the most popular and influential Indian blockbusters of the 1990’s, features terrible acting, cornball dialogue, bland dance sequences, a boring story, and so-so music. This is one of the weakest Bollywood hits I have ever seen. I suppose the story ends in a satisfactory way despite the script’s cliched design, but that alone cannot make up for its juvenile performances and dance scenes that just don’t deliver the goods. Viewers can either choose to come to grips with this issue of caricatured acting or live in fanboy-denial. I maintain that there are two kinds of people in this world — people who understand what I’m saying, and people who like this overrated, nostalgia-fueled trash.

SUMMARY & RECOMMENDATION: Almost every single scene in Kuch Kuch Hota Hai reaches an unbearable limit of contrived sappiness and cheese. I can’t take any of these characters, conflicts, or jokes seriously whatsoever. This film feels like a Hindi romance version of Batman and Robin (1997), albeit an ever so slightly less excruciating one. Kuch Kuch Hota Hai is just too damned corny for too damned long. Run while you can.

— However… the flashbacks in the first half of the movie allow the narrative to unfold naturally in the typical Bollywood two-act structure. Most of the songs are decent. The ending is OK, I suppose.