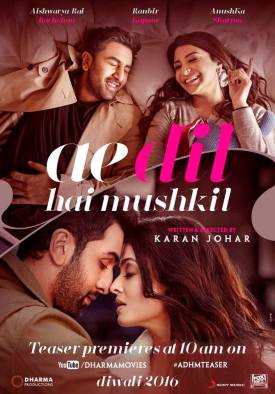 Epic Bollywood romances and Karan Johar are two things with which I have a memorable, if mixed track-record. I identify the former as “epic” because of Hindi blockbuster cinema’s penchant for overindulgent run-times (re: 2.5 – 3 hours) rather than truly unforgettable stories or premises; but all cynicism aside, films by Sanjay Leela Bhansali (e.g. Devdas [2002], Bajirao Mastani [2015]), which are vintage Bollywood, are some of my favorite movies. 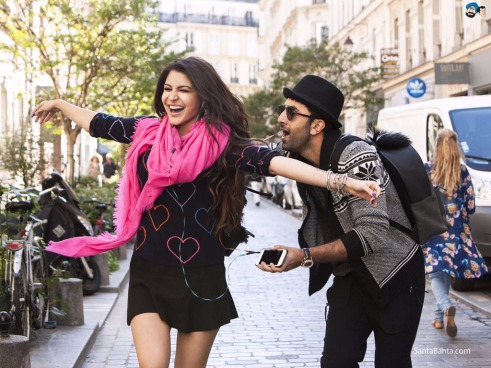 Anushka Sharma (left) and Ranbir Kapoor (right) goof off in the streets of London.

Bollywood romances by Johar, however, are films I can by and large do without. To this day, I resent the critical and commercial influence of his debut picture, the mega-hit Kuch Kuch Hota Hai (1998), which gave us over a decade’s worth of cringe-worthy three-hour soaps that make Dilwale Dulhania La Jayenge (1995) look like a dramatic masterpiece. His later films retain the same style, with My Name is Khan (2010) being one of the most boring, impotent melodramas I have ever seen. I’m glad his artistic influence in modern Indian filmmaking appears to be on wane, with his directorial efforts through his parent company, Dharma Productions, becoming less and less frequent.

Still, the Johar name continues to carry much weight in Hindi cinema, and when I saw Karan’s name on the poster upon walking into the cinema (I hadn’t looked up the film beforehand), I grew apprehensive. I knew what I was in for.

In defense of my allergic reaction, the first forty-five minutes or so of Ae Dil Hai Mushkil are vintage Karan Johar; awkward character-introductions, lame dialogue, cringe-inducing dance-numbers, and juvenile humor abound as leads Ranbir Kapoor and Anushka Sharma embark on the classic, universal will-they/won’t they relationship. Their characters’ motivation for spending time with one another, let alone going on double-dates, is laughable, as are the performances of their respective significant others. I feared for my sanity well before the end of the first act.

That being said, there were some hopeful signs for the remainder of the film, such as intelligent flashbacks (e.g. Kapoor references his father’s “healthy relationship,” the frame smash cuts to an intentionally awkward set-up of him seated across a giant table from his dad; Sharma references her “lovable sisters,” the camera smash-cuts to a family photo of them glaring daggers at each other), and some clever slapstick like Sharma smacking Kapoor after he whines incessantly for an entire scene. Oh, and also the fact that Sharma and Kapoor develop a friendship!

Perhaps the best thing about Ae Dil Hai Mushkil (henceforth, ADHM) is how tastefully it articulates the emotional minefield of one-sided romantic love between friends. Where as most films either have their friendships evolve into unrealistic happy love-stories, chastise male characters for such devious thoughts, or ignore the issue altogether, ADHM takes the time to examine the complexities of such relationships, and develops its male and female leads while revolving around this unconventional dynamic.

If you’re shocked to hear such artful screenwriting from a writer-director like Johar, do not worry; that reaction only indicates that you are still sane.

ADHM still struggles with effective pacing, creative song and dance-numbers, and believable supporting characters, but the core of its story, Kapoor and Sharma’s will-they/won’t-they relationship, is solid, and therefore the movie is a success. Their characters feel real, and only deepen the longer the story develops. Kapoor’s performance in particular is admirable, conveying both genuine platonic affection and romantic pining for Sharma, while the latter maintains a snarky, yet wounded complexity about her own failings with love, as well as her loyalty toward Kapoor’s friendship. It also doesn’t hurt how the film’s humor is a clear step above the Johar-average. Aside from the aforementioned cringe-inducing opening act, every dumb line like Sharma’s “Bonjour!” greeting in Paris is balanced out by a clever one, like Kapoor and Sharma reenacting classic Bollywood scenes in the Alps, only to have Kapoor complain about the cold while a virtually naked Sharma berates him.

ADHM is a balancing act between effective, intentional cheese and awkward, unintentional cheese that tilts ever so slightly toward the former by film’s end. Most of Karan Johar’s filmmography represents the worst of Bollywood’s sloppiest cliches, from forced love-triangles to bad jokes to boring songs to lackluster pacing, and his latest film isn’t so much a disengagement from that as it is a realignment of it. This movie benefits from a creative central relationship and good performances from its co-leads, and that minimal yet significant thinking outside the box is what carries it through its quasi-rebellious, unconventional ending. Like any critical doubter, I don’t mind being proven wrong every once in a while, so long as it yields a better than expected film-viewing experience, and that’s what this film was.

SUMMARY & RECOMMENDATION: Ae Dil Hai Mushkil challenges its own director’s authoritative cliches with respective to romantic filmmaking and succeeds on most accounts. Its annoying first act notwithstanding, leads Ranbir Kapoor and Anushka Sharma slog through endless scenes of repetitive banter to produce good jokes, great chemistry, and an even better ending. Had the movie eliminated its superfluous musical montages, it might have yielded a wholehearted recommendation from yours truly.

— However… as it stands, Ae Dil Hai Mushkil is still over two and a half hours of mediocre romance surrounded by a terrible supporting cast (minus Aishwarya Rai, Shah Rukh Khan, and Fawad Khan), questionable set-design, and narrative filler. If you love old-school camp-fests like Kuch Kuch Hota Hai, you’ll be able to overlook most of that, but for the rest of us, that opening first hour is rough.

–> ON THE FENCE: In other words, it’s far better than I thought it would be, but not enough to make me a fan of its “auteur.”