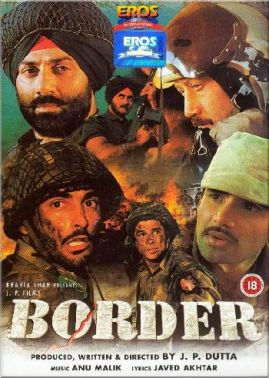 According to Wikipedia, writer-producer-director J. P. Dutta made Border as an anti-war film, as in a movie that argues that war is bad and that we shouldn’t wage it for either political or economic reasons. I don’t know who’s editing Wikipedia these days or if Dutta was ever so bold as to claim anything to that effect, but if that statement is true, that is one of the most laughable boldfaced lies I have ever heard. To be sure, Border is an entertaining and effective melodrama that paints well written, interesting characters against an exciting background of warfare and national conflict. It’s one of the most effective Hindi melodramas I’ve seen since Sanjay Bhansali’s Devdas (2002), which is saying much given my fondness for that film. But an anti-war film? Please…

Border is the first (and so far only) Bollywood war film I have ever watched; given my lukewarm reactions to Ghajini (2008) and Dhoom 3 (2013, my introductions to Hindi action filmmaking), I was surprised how much I enjoyed it, how entertaining it was from beginning to end. Border is a true blockbuster epic, boasting a 3-hour adventure with every sequence and character backstory fleshed out, all with refreshingly little filler. The story, characters, and action-setpieces are strong enough that the film doesn’t rely solely on its songs or elaborate musical numbers for pacing, and for a film of this size, that’s an impressive feat. Border is not, however, any sort of pacifist or peace-preaching philosophical art pastiche, nor a commentary on the moral ambiguity of war —- it is a straightforward action film through and through, and don’t let any sociologist (or unabashed Indian patriot) tell you otherwise.

Top: One of the film’s many flashbacks to more peaceful times. Middle: Boom(!) goes the artillery as Pakistani and Indian forces battle in the film’s 3rd Act centerpiece. Bottom: Hindustaaaaaaaan! Say, isn’t that plane flying a little low to the ground?

Something I’ve noticed regarding Hindi period films of the late 1990s and early 2000s is their overall consistency compared to most Bollywood blockbusters in decades before or since. Films like this one, Hum Dil De Chuke Sanam (1999), Lagaan (2001), and the aforementioned Devdas remind me of American films in the late 1970s-1980s in terms of effective genre pulp and well executed drama. Those early American blockbusters were made during the pinnacle of practical FX, before the ease and convenience of digital FX neutered much of the spectacle inherent to high-concept filmmaking, and managed to retain some of the immediate post-American New Wave magic of the late 1960s and early 1970s regarding creative, forward-thinking screenwriting and editing.

Likewise, mainstream Bollywood pictures of the late 1990s to early 2000s remain notable for their effective melodrama, showcasing incredible dance sequences with advances in camera technology and choreographing phenoms like Saroj Khan hitting their creative peak. It was prior to the modern Westernization of the Bollywood industry, which has since turned numerous contemporary Hindi hits into wannabe Hollywood action films and bizarre mishmashes of classical Indian dance and MTV music videos, which blend like oil and water.

Despite its genre, in terms of Border’s construction as a general melodramatic narrative, it’s both comparable in style to its aforementioned contemporaries and just as accessible, provided one isn’t too ethnically invested in its setting of the 1971 Indo-Pakistan War. By that, I mean you’ll only be turned off by the film if you’re of Pakistani descent, a Muslim, and/or take either of those heritages too seriously. To be fair to those viewers, the biggest fault of Border is how laughably biased it is to the point of silliness. The movie unapologetically portrays the Hindu (and to a lesser extent, the Muslim) Indian soldiers as the heroes and the Pakistani forces as the villains. This story is all black and white and no shades of grey. Throughout every scene, Border oozes Indian nationalism and Hindustani pride, painting the characters of the 23rd Battalion Punjab Regiment as hopelessly outnumbered underdogs against a technically superior, sinister opposing force, the former protecting their “rightful” claim to the contested Rajasthan territory. In terms of narrative sociopolitical bias, Border sprints beyond patriotism into outright jingoism, and then some.

Thankfully, the numbing simple-mindedness of the story does not extend to its characters, most of whom are well written and relatable given their plethora of flashbacks and detailed backstories. Almost half of the film consists of establishing the personalities of the principal cast before they were called to serve. The way the film takes its time to set up each major character is admirable, especially given how the screenplay never grows overindulgent in this regard. Border accomplishes a rare feat by pacing itself well for almost three hours and wasting little of its viewers’ time with frivolous details. Given its native industry, that accomplishment is remarkable.

The set-pieces are well rounded and diverse, though few are meant as the film’s primary spectacle, save for the final battle. Most of the songs are melodic, easy to listen to, and feature simple but effective choreography. My lone musical critique pertains to how the filmmakers reuse the same one or two playback singers to the point where most every actor’s playback voice sounds the same. This becomes distracting when we see different characters of varying voice pitches, body sizes, and personalities singing with the same voices repeatedly. As for the battle scenes, they’re sparse and not terribly ambitious, save for the final extended action sequence where the Punjab Regiment hold their own against a siege of Pakistani forces. The action is effective, especially for a Bollywood film, and I’d be lying if I didn’t say the final stand isn’t an exciting climax to a solid movie.

Border is, top to bottom, a highly effective melodrama set against a colorful war backdrop, a genre one doesn’t often see in Bollywood. Therefore, it is satisfying how J. P. Dutta pulls these extraneous elements together to make a successful film. It’s far from perfect, namely in light of how its story is too simplistic and laughably nationalistic to take seriously, but unlike many of its Bollywood brethren, Border makes you take its characters seriously and presents them as complicated human individuals. Unless you’re a phenom auteur known for screenwriting outside the box (e.g. Quentin Tarantino, Paul Thomas Anderson, Martin Scorsese), the rule of thumb for popular filmmaking is to keep a movie’s story simple and its characters complex, and in that sense Border is a fine film that checks all necessary cinematic boxes.

SUMMARY & RECOMMENDATION: Dutta gets the characters and the story’s pacing right; his ensemble cast and their solid backstories are the rock that hold this war epic together. The music of Border is comparable to your average, strong Hindi soundtrack, and its cinematic violence is well above most South Asian action scenes. The finale is damned rousing stuff.

— However… the narrative backdrop and obvious political bias of the film are so slanted you’ll chuckle throughout much of the film… or be downright offended if you live on the western side of the Kashmir border. The film could’ve used two or three additional playback singers.

? If that Pakistani tank hadn’t been driving backwards, would Sunil Shetty’s anti-tank mine even gone off if he’d thrown it at the vehicle? Don’t anti-tank mines require tremendous weight to set them off?

I love movies, music, video games, and big, scary creatures.
View all posts by The Celtic Predator »
« ‘Birdman’ (2014): The Oscar-Bait Strikes Back
The Problem with PG-13 and the Modern Emasculation of Mainstream Films »