Bollywood cinema in particular and Indian cinema in general are famous for their filmmaking “family clans,” nepotistic organizations linked by love and law, through marriage and across generations. A few years ago, for instance, former Bollywood star actress Aishwarya Rai joined the famed Bachchan clan by marrying wannabe star Abhishek Bachchan, son of Amitabh Bachchan; the latter is considered the most famous man in India, as well as one of its greatest actors. Another notable Indian filmmaking patriarch is Rakesh Roshan, a prolific Bollywood actor, writer, producer, and director who has been active in the Hindi film industry since the 1970s. To modern audiences, he is most well known for launching the career of his son, Hrithik Roshan, with the romantic drama/action hybrid, Kaho Naa… Pyaar Hai (2000) and later cementing it with the Krrish Trilogy.

The Krrish Trilogy has as much in common with modern Hollywood megafranchises as it does with contemporary Bollywood filmmaking. While both the original (Koi… Mil Gaya [2003]) and its first sequel (Krrish [2006]) are typical industry genre-blenders, the former is unique in that it is likely India’s first science-fiction film, while the latter transitioned the series into a superhero franchise. Sci-fi movies are commonplace in Hollywood but still rare overseas, while superhero filmmaking and retrofitting existing intellectual properties to fit modern audience tastes are the industry’s bread and butter. To put it bluntly, the Krrish Trilogy transforms from a sci-fi riff on 1990s Bollywood romance to an unabashed superhero action franchise by its third installment. This artistic cross-pollination becomes more intriguing upon noting the similarities of Koi… Mil Gaya (henceforth, KMG) to Steven Spielberg’s E.T. The Extraterrestrial (1982), which in turn is said to have been inspired by an unproduced Satyajit Ray screenplay from the 1960s. 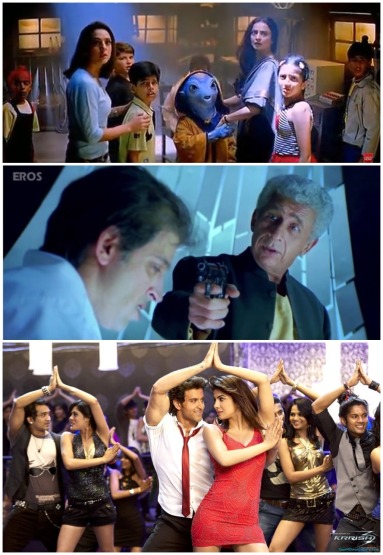 KMG is the small beginning from which the big, big Krrish Trilogy (currently India’s third highest grossing series of all time) would grow. Other than its modest sci-fi twist, Hrithik Roshan’s sophomore hit is vintage 90s Bollywood: Every frame (even in nighttime sequences) is overexposed, characters wear cheesy, colorful, baggy costumes, acting is theatrical and over-the-top, and X-game stunts (e.g. scooters, motorbikes, etc.) are utilized as action sequences. The opening act following the prologue is almost brilliant so-bad-it’s-good cheese that films like Kuch Kuch Hota Hai (1998, KKHH) or Hum Aapke Hain Koun (1994) should take notes. While yes, this film was released in the early 2000s, like Kaho Naa… Pyaar Hai before it, it is a carryover from another era; its significant science-fiction undertones notwithstanding, KMG has more in common with Dilwale Dulhania La Jayenge (1995, DDLJ) than either 3 Idiots (2009) or E. T.

The premise of KMG concerns an astronomer (co-writer, producer, and director Rakesh Roshan) who makes contact with an alien intelligence, and while chasing a sighting in his vehicle, he crashes, killing himself and injuring his pregnant wife (Bhanurekha Ganesan, aka “Rekha”). When Rekha later gives birth to his child, Rohit Mehra (Hrithik Roshan), she discovers he is mentally handicapped due to injuries sustained during this close encounter of the third kind. The bulk of the story follows Hrithik, who both falls in love with default romantic interest Preity Zinta and discovers more about the aforementioned alien race when they return to earth.

While the alien subplot adds motivation for Hrithik’s later actions and sets the plot in motion, the bulk of the narrative is dedicated, as one would expect, to Hrithik’s personal development, his relationships with Rekha and Zinta, and his eventual acceptance by the local community. I was never sold on Hrithik’s questionable portrayal of a developmentally disabled character, but his arc is so endearing, sci-fi twist and all, I couldn’t help but embrace the camp. At the end of the day, a determined protagonist who protects his cute alien friend from government abduction works as a movie. The story teeters between annoying, overindulgent, saccharin artificiality (e.g. KKHH) versus heartfelt camp (e.g. DDLJ) and doesn’t fall off that tightrope… often.

The first sequel, Krrish, much like The Dark Knight (2008), was the series’ breakout title that would retroactively define and rename the entire trilogy, and is also the best film in the series. The movie is as much a genre-blender as its predecessor, but is a better, more seamless one. After a significant time gap between films and the off-screen removal of Preity Zinta, Krrish begins much like any major Bollywood hit, with goofy slapstick, melodramatic soap opera acting (effective melodrama, mind you), and the elongated introduction of our new female love interest, Priyanka Chopra. The narrative transitions gradually from your standard Hindi romance — with the mildest of sci-fi undertones — to a competent action film with charismatic superhero flavor.

This genre transition works for two reasons: (1) Hrithik and Chopra’s relationship functions as the core of the story, as well as audience sympathy, and (2) acclaimed actor Naseeruddin Shah sells the superhero conflict as a great villain. The latter also incorporates Hrithik’s previous starring role in KMG (the actor is double cast both as the titular hero, Krishna Mehra/Krrish, and his father, Rohit, the protagonist of the previous film), which provides motivation for both Chopra and Hrithik’s Krrish beyond standard Bollywood filler or generic heroics. It’s an impressive twist I didn’t see coming.

As for the film’s action itself, it’s a middling affair between the cartoonish yet digitally bedazzled works of Hollywood superhero blockbusters and the grounded theatrics of Joel Schumacher’s Phantom of the Opera (2004), as well as various East Asian kung fu movies. The action sequences are limited in size and scope due to technological limitations, but this works to the film’s advantage since it maintains emphasis on our lead characters, not the FX. There’s enough dumb action for those who want it, but at its heart, Krrish 2006 is a Bollywood romance about love and family with a significant but ultimately secondary superhero coating.

Krrish 3 (2013), on the other hand, is a full-fledged, unapologetic superhero feature in the vein of Spider-Man (2002) or Superman Returns (2006). As a matter of fact, the worst thing about Krrish 3 is how hard it tries to imitate a Hollywood superhero flick, often to its detriment. The film’s “Indianization” of American blockbuster tropes are minimal, considering how both industries have coalesced around a semi-bloated running time average of two and a half hours, and the musical numbers are forgettable outside of Hrithik’s dancing. The action scenes are a step below the campy wire-FX and stylized martial arts of Krrish 2006, utilizing extensive (and obvious) blue-screen backgrounds in addition to numerous CGI characterizations and questionable digital FX superpowers. Even worse are the laughable costume designs of everyone besides Hrithik; all the bad guys, including and especially main antagonist Vivek Oberoi, look like a cross between X-Men (2000-2019) ripoffs and Mighty Morphin’ Power Rangers (1993-1995) villains.

Altogether, the Krrish Trilogy is an interesting experiment in Hindi blockbuster filmmaking. I wouldn’t describe it as a rousing success from first installment to the last, but as a dynamic, genre-blending mini-series, it boasts considerable entertainment value and more than enough heart. Western viewers will be caught off guard, to be sure, so prior exposure to Indian cinema is recommended — you’ll need to understand how to turn off that anti-camp switch in your brain. The series runs the gamut of Bollywood cheese, from hardcore 1990s-esque melodrama to 2000s genre-blending to 2010s Hollywood ripoffs, and more of it works than not. Much of this cinematic appeal is due to Rakesh Roshan utilizing his son’s star power for maximum effect, while developing his supporting cast (also including his son) over the course of all three films. Not surprisingly, it’s the human relationships that provide stability and support for all the superfluous FX, action scenes, and so-so dance numbers.

SUMMARY & RECOMMENDATION: Koi… Mil Gaya is a bit long in the tooth and doesn’t always nail its camp humor, but its bizarre sci-fi riff and strong cast see it through. Krrish (2006) is the strongest of the bunch, melding romantic Bollywood cliches with just the right amount of action and superhero theatrics, in addition to fleshing out Hrithik’s dual roles and adding a memorable villain in Naseeruddin Shah. Krrish 3 is the runt of the litter, entertainment-wise and artistically speaking, given its lackluster FX, bland action choreography, and forgettable villainy.

? I wonder how much the second film’s development hinged on Preity Zinta not reprising her role?

I love movies, music, video games, and big, scary creatures.
View all posts by The Celtic Predator »
« Examining ‘Transformers: Age of Extinction’ (2014): Not a Review
‘Deliverance’ (1972): When You’re a Long Way from Home »