While I awaited the debut of RRR (2022), S. S. Rajamouli’s latest epic, on a streaming service available Stateside, I took the time to appreciate one of the few high-profile, high-concept blockbusters released in the Kannada-language film industry in recent years. K. G. F: Chapter 1 (2018; Kolar Gold Fields, the setting of the film), which I saw a couple years ago, stood apart from the hordes of contemporary South Indian blockbusters (mostly Telugu and Tamil) and their standard-issue slow-motion action, invincible heroes, forgettable musical numbers, and general lack of cinematographic style. K. G. F.’s first installment traded the bland, slow-motion choreography of most South Indian action movies (see inspirations in Krrish [2003, 2006, 2013], 300 [2007], The Matrix [1999]) for the blunter, more intricate choreography and framerate-manipulated techniques of The Russo Bros.’ Marvel films (e.g. The Winter Soldier [2014], Civil War [2016], Infinity War [2018]), reduced its song-and-dance components to a single introductory tune, “Salaam Rocky Bhai,” and embraced a distinct color-grading scheme of fiery reds, oranges, and bright yellows. While that first installment was not, like its second half released this past month (April, 2022), without its problems, writer-director Prashanth Neel’s direction seemed to take better advantage of its budget compared to productions several times its size (e.g. Saaho [2019], 2.0 [2018], Prem Ratan Dhan Payo [2015]). K. G. F.’s (henceforth, KGF) combined production will remain the most expensive and influential Kannada-language film until at least next year’s Salaar (2023), also written and directed by Neel, and represents the latest expansion of South Indian Cinema‘s monopoly on South Asian tentpole blockbusters and special FX set-pieces. 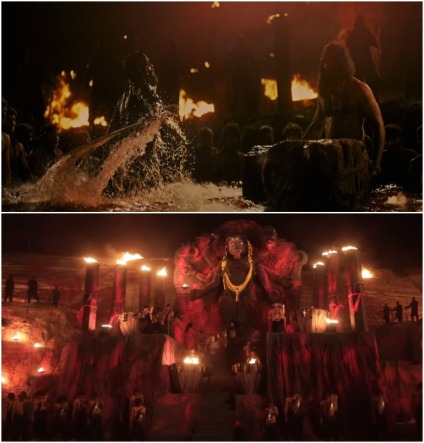 Yash (top left) leaps from the water to assassinate Ramachandran Raju as the latter is coronated under a statue of Kali (bottom).

The base narrative of KGF is the most derivative and least noteworthy attribute of the film, though Yash’s (real name: Naveen Kumar Gowda) lead character as a generic Mumbai hitman isn’t far behind in terms of genericity. After the discovery of gold ore in Mysore (later Karnataka) and the birth of Yash’s protagonist on the same day in 1951 (the bulk of the films take place in the 1970s-1980s), KGF: Chapter 1 follows a formulaic yet convoluted rags-to-riches story as Yash transitions from childhood poverty into a life of organized crime, which ends with Yash returning to his birthplace to displace the local warlord (Ramachandra Raju) and his monopoly over the eponymous gold mines. Chapter 2 (2022) sees Yash expand his criminal operations with the help of the local indentured workforce, whom he quasi-“liberated” in the 2018 installment, and fight off challenges from his former employers as well as allies of the previous KGF leadership (e.g. Sanjay Dutt).

What makes KGF memorable despite its by-the-numbers script are those aforementioned flourishes of cinematographic style and willingness to expand the bland formula of most South Indian — really, Indian in general — action scenes. KGF is no John Wick (2014, 2017, 2019), Raid (2011, 2014), Kim Jee-woon thriller (e.g. The Good, the Bad, The Weird [2008], I Saw the Devil [2010], The Wolf Brigade [2018]), or even Extraction (2020), but its straightforward, violent choreography gives its action sequences considerable bite and blunt physical humor. The film’s arid, dusty set-design, both in studio and on-location, frames these memorable set-pieces well and is heightened with some of the most notable color-grading FX since Fyodor Bondarchuk’s Stalingrad (2013). Its overall visual style distinguishes this Kannada epic from the hordes of otherwise likeminded mainstream Indian action films based on similar scripts, though its musical score and sound-design are no slouch either. All these elements reach a high point at the climax of Chapter 1, where Yash assassinates Raja and assumes his throne beneath a massive Kali statue. I only wish the two-part film had additional musical numbers to better modulate the movie’s combined 323-minute running time.

Speaking of that runtime, KGF’s second half doesn’t compare to its first, much like Baahubali (2015, 2017), thanks to various pacing issues. The story’s set-pieces become more and more self-indulgent (a pointless shootout at a police station comes to mind) and the narrative stalls for longwinded subplots like Yash’s rivalry with supporting actress Raveena Tandon, a thinly fictionalized Indira Gandhi. Some of this narrative drag is due to the fact that Yash’s poverty stricken backstory and gangland dominance just aren’t that interesting. KGF runs on its directorial style, lead performance, and sound-design, so more or less everything else feels like obligatory baggage mandated by studio executives.

Included as part of that baggage but extending beyond the film’s sheer, bloated length are KGF’s unnecessary present day storyline, Srinidhi Shetty’s lifeless female lead, and the casting of the film’s main villains. KGF’s main period narrative is framed by a contemporary news interview with Anant Nag in Chapter 1 and Prakash Raj in Chapter 2, who recount the principal storyline via a series of poorly staged, poorly acted conversations that recount what the audience already knows or imply what the audience can predict. Shetty’s flatline of a love-interest is similarly uninspired, while Sanjay Dutt, whom I’ve never cared for as an actor, should’ve been replaced by Raja as the single overarching villain.

At the end of the day, KGF is an above-average directorial effort of a painfully average screenplay, a core of high production values, entertaining fight sequences, and impressive audiovisual style weighed down by a formulaic, uninspired story. It looks great and sounds almost as good, yet I found so much of its latter half boring, repetitive, and bloated, and had to overlook weaknesses like its embedded narrative framing device and lackluster romantic subplot even in its stronger first half. I believe Prashanth Neel nonetheless has a good career ahead of him if he can channel the strengths of KGF — its fast-paced action set-pieces, its dynamic score, its identifiable color palette and gritty set-design, etc. — into future movies without pandering to the demands of major studio traditions.

SUMMARY & RECOMMENDATION: A modern landmark in Kannada cinema and the next stage in South Indian filmmaking’s growth as a contemporary South Asian genre powerhouse, Prashanth Neel’s KGF takes advantage of star Yash’s charisma and stellar set-design to envision an action extravaganza that feels distinct from the endless blockbuster wannabes before it. Its auteur stamp is most evident in its action scenes’ physicality, limited but memorable musical components, and fiery color-grading FX.

— However… KGF is weighed down by contemporary studio filmmaking clichés, from its throwaway female roles to its overextended cast of villains to its unnecessary in-universe commentary. Unlike Baahubali, it doesn’t break the budget on overzealous digital FX, but also cannot justify its two-act structure and massive length.

—> ON THE FENCE: There’s plenty to like here, but for my part, I lost interest in KGF about 1/3 of the way through Chapter 2 after Yash bought all those Kalashnikovs.

? Speaking of which, why not just end the film there?