Upon seeing this film, I was astounded. Not since The Matrix (1999), or perhaps even John Woo’s Hard-Boiled (1992), had I seen such intense and frenetic action. To put it bluntly, The Raid is one of the greatest action films I have ever seen, and probably ever will see in my lifetime. And yes, before you ask, I have seen quite a few, both good and bad.

In some ways, this film achieves what few action flicks ever do, in that it loosely flirts with the concept of merging into experimental cinema. Its dependence on the pacing of its script ultimately keeps it from crossing over, like any film centered around set-pieces (i.e. musicals or action films), but The Raid and other noteworthy action pictures blur the line a bit. In this film, actions speak louder than words — much louder, in fact. There may be 100 lines of dialogue throughout the entire film. And there are way, way more punches thrown. 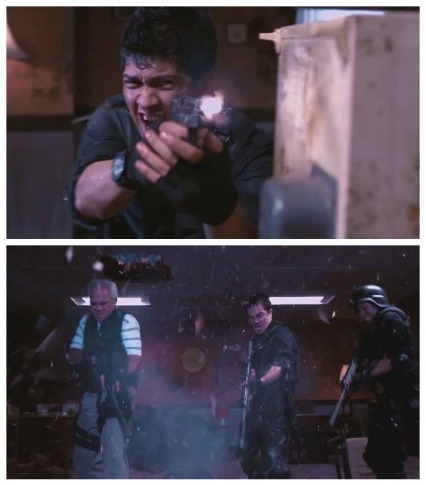 Although The Raid is most famous for its hand-to-hand martial arts showcase, the film also features some impressive shootouts as well.

The Raid’s main conflict is built around its premise, which concerns a SWAT team trapped inside a hostile apartment building deep in the slums of Jakarta. The lean narrative provides the setting and sets the pace for what is primarily a visual exercise, with added bone-crunching sound FX. The Raid is a gritty, gruesome, ultraviolent dance of death that is every bit as darkly beautiful as it is terrifying and painful to watch. Every minute of the film focuses on our team of heroes as they shoot, punch, kick, elbow, knee and stab their way to freedom, all while trying not to get dismembered in the process.

This brutal, bloody ballet of an action movie wisely sticks to a simple, yet effective plot and inserts just enough character development to make the audience connect with and root for the main character, Rama (Iko Uwais), and to make the action engaging on a character-level. By no means is the violence in The Raid without consequences. Particularly noteworthy alongside the top-notch action is the tone and atmosphere of the film. While unquestionably an action film, The Raid has tasteful tinges of the horror genre sprinkled throughout, with suspenseful hide-and-seek moments, dark, grimy environments, and an atmospheric tension that never lets up. The set-design and lighting are impeccable.

Of no less important note is the expert cinematography, which allows writer-director Gareth Evans to showcase his action scenes in wide scope and avoid the infamous shaky cam technique, abused by most action-filmmakers these days but mastered only by one (Paul Greengrass). The Raid’s action scenes are edited as invisibly as the best pictures from Hollywood’s Golden Age, while the handheld camerawork catches every punch and kick, no matter how fast or painful the impact. The technical components of these set-pieces has ruined most action movies for me, to be frank. The flow of the battles is so fluid, natural, and their endings so powerful that they should be used as a case-study for burgeoning action-filmmakers.

The pacing of both the action scenes themselves and the movie as a whole is another one of the film’s biggest selling-points. Needless to say, a movie like this much longer than 100-minutes would be exhausting, so the rhythm of the narrative, expository scenes, and fight-scenes is crucial. The editing, also done by Evans, achieves this impeccable balance with flying colors, with some additional help by Mike Shinoda and Joseph Trapanese’s memorable soundtrack.

Evans benefits immensely from working with martial artists, Iko Uwais and Yayan Ruhian, who play the protagonist and antagonist, respectively. Not only are both men professional athletes who can act, the two fighters are also brilliant choreographers that make the fights brutal and as aesthetically impressive as a masterful Bollywood dance ensemble. Perhaps the most surprising genre-stereotype that The Raid shatters is that professional athletes tend to make horrible actors, as opposed to students of theatre, “professional” wrestling, and music. While their career-roles may be specialized, most everybody in this film handles their dialogue well, reacts with emotion, and commands screen-presence, no more so than our aforementioned lead and villain. Joe Taslim (pictured above), who portrays the squad’s sergeant and leader, is an added bonus as both an actor by trade and experienced judoka. He’s one of the most memorable characters in the movie, along with the co-villain, a salacious Ray Sahetapy.

Evans’ ability to shoot cinematic violence so that the audience can actually see what’s going on and appreciate it makes all the mayhem at hand so much more satisfying than if it had been filmed in a more conventional way. Modern American action films need to take note of this and follow suite. In The Raid, one constant selling point is that it is always crystal clear whose knee is smashing into whom’s face. It’s amazing how people have forgotten this: If we can’t tell what’s going on in an action scene, it’s not brutal or violent or awesome — no mater how much noise or how many fast-moving images come from the screen.

Lead man Rama (Iko Uwais) is a deadly dancer with that baton and combat knife of his.

However, because of its raw, visceral style, The Raid looks, sounds, and feels a lot more brutal and violent than all those films. It is one of the most violent films I have ever seen, as a matter of fact. When you watch Uwais stab a combat knife into a guy’s quadriceps, and then rip it all the way through the muscle to the knee cap, it looks and feels like he stabbed that guy in the quadriceps, and ripped the blade through his knee cap. The actions on screen are often painful and even exhausting to watch, but you will be on the edge of your seat the entire time, and really, why else would you watch a movie? Don’t answer that question!

The Raid is in many ways the ultimate celebration of machismo, and yet there are no Rambo or Arnold-builds in sight. Hell, the film’s main threat is the smallest guy (Yayan Ruhian) in the whole damned building. But the entire point behind the film, and much of what makes the project so impressive, is that so much was done with so little. On a measly $1.1 million budget, The Raid eclipsed what dozens of wannabe action flicks tried and failed to do with resources literally a hundred times the size of Evan’s brainchild. The Raid is not about looking tough so much as it is about doing the tough stuff — quite matter-of-factly, walking the walk. If your girlfriend can make it through this, she’s a keeper.

Perhaps my only gripe with the movie are some natural failings of its chump-budget. Even in Indonesia, $1.1 million isn’t much for a feature-film, and as such the filmmakers had to cut corners in areas like sound-editing and picture resolution. The Raid won’t exactly light up your HD-setup, nor will its repetitive hand-to-hand combat sound FX deceive your ears; the same three or four punch, kick, knee, and elbow noises are used over and over and over and over… Still, these are minor nitpicks against an overall beautiful action ensemble.

The centerpiece of any “action-musical” should be the action, and in this area, The Raid absolutely excels. Shootouts, hand-to-hand combat, and knife-duels all combine to make the gory violence varied, intense, and engrossing. The action in this film is so damned good (and is of course strong enough in other areas, too) that all genre-aficionados should appreciate it. It combines the rough, gritty feel of true independent filmmaking with hardcore-ultraviolence and polished direction to create one of the most powerful, memorable action movies of this generation.

Seriously, there has not been an action film this good released in at least a decade. Experience hardcore violence the way it was meant to be experienced: Dark, bloody, and absolutely unapologetic. I loved every minute of it.

SUMMARY & RECOMMENDATION: The Raid is an action extravaganza, a true wetdream for those who like their cinematic violence fast, bloody, and unapologetically hardcore. It won’t win itself any non-genre converts given its bare-bones plot and limited characterizations, but this film is simply too raw and visceral to deny.

—– However… some of the fights almost last too long. Some repetitive sound editing.

? Could The Raid and its sequel be considered a full hybridization of Western and East Asian close-quarters-combat action filmmaking, i.e. merging of handheld camerawork, fast cuts, and elaborate choreography with wide-angle lenses?