‘Act of Valor’ (2012): Because Right-Wingers Need Action Movies, Too

In this modern age of political correctness, diversity crises, international box office hauls, and Oscar controversies, few conservative gimmicks remain in Hollywood to take advantage of the slowly dwindling, yet still sizable conservative, rural American population. Most movies that deal with military intervention or even hint at political subterfuge stay far away from American flag-waving, foreign enemies (unless they’re Muslim), and jingoistic themes in general, and sports films (the other prominent, once lucrative bastion of non-liberal Hollywood filmmaking) have long been on the decline. That being said, certain conservative gimmicks remain to counteract the never-ending box office draws of hamfisted social commentary and PC Crutches, which appeal more to Millennials, urbanites, liberal arts douchebags, and international markets… because rednecks, gun-toting survivalists, Jesus-freaks, and veterans need movies too, God dammit! Those right-wing cinematic attractions are: 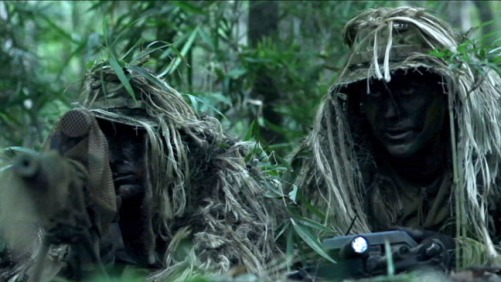 Act of Valor showcases a wide range of SEAL combat techniques and gear, including extensive camouflage suits. If that’s worth $10-18 to you, then enjoy.

Needless to say, the highest-grossing of those categories is the second, patriotic movies about America’s armed forces, and that is the category in which today’s reviewed film resides. I knew this film would be an instant hit in conservative America, particularly within the rural Midwest and Deep South, the former from which I hail and the latter in which I’ve traveled a great deal of late. Its entire premise, gimmick, and marketing angle — other than the general military aesthetic, of course — is that this fictional war-film features portrayals by active duty Navy SEALs. And that about counts for all of its story, character development, cinematography, and action-scenes as well.

First off, trying to sell this film on its use of active-duty Navy SEALs comes across as shallow and commercialized — a desperate attempt for attention when the marketers know they don’t have a script worth selling in the slightest. If Act of Valor managed to use its real life heroes effectively for more than twenty-five minutes of the movie, I might have felt inclined to overlook the laughable final product that was made. But, alas, such was not the case. The SEALs look appropriately badass and effective when the action’s going, and some of those scenes are intense, if not terribly groundbreaking. When things slow down, though, the film becomes a flat, boring, disaster.

My main problem with this film is that I understand the gimmick, but I don’t get the appeal. Part of the allure of war documentaries like Restrepo (2010) or The War Tapes (2006), or so I thought, was the veritable realism aesthetic, the cineme verite revelation of truth behind real-life war and real-life warriors. But this? Act of Valor is a fictional war-narrative not based on any individual, platoon, or actual war conflict, and features special forces who can shoot, clear a room, command vehicles, and operate as a unit, because that’s their job. Again, those parts make up less than 25% of the actual film, and the rest concerns a dry, dull, confusing plot about a Muslim or Russian terrorist who’s trying to do… something. I don’t see what the point was having real-life soldiers pretend to be actors, instead of real-life actors pretending to be soldiers, the latter of which can be trained to perform squad maneuvers, clear a room, and operate a firearm safely, at least for the purposes of performing 25-minutes worth of action scenes in a feature-film. I wonder if average citizens who saw random scenes from this movie, The Hurt Locker (2009), Zero Dark Thirty (2012), and Generation Kill (2008) (all dramatizations), could tell which ones were performed by active duty soldiers and which ones were actors.

If the action scenes from this film were removed and posted on YouTube as a demonstration of SEAL tactics, I might enjoy them as a Michael Bay-esque recruitment commercial, or web-series. Watching this as an actual film though, you have to sit through over an hour of boring military jargon and awkward “small-talk” recited by untrained actors. Those who obsess over frivolous details like the particulars of a superhero’s costume or a Civil War-era prop or a real-life Navy SEAL pretending to be an actor pretending to be a Navy SEAL, and can somehow overlook an hour or more of filler, will enjoy this film. Clearly a good many folks did, because hallow authenticity in a meaningless non-documentary is worth the price of a movie ticket. 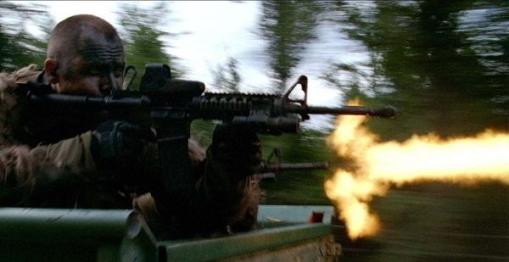 A good part of the film, where the bullets are flying and our soldiers aren’t talking.

The plot is boring and cliched, the voiceovers are sleep-inducing, the dialogue-driven scenes are flat, and there’s no reason why you should care about any of the characters or anything that’s at stake. Act of Valor is a handful of action scenes intermixed with a bunch of nobody-shooting-anything scenes. This is not a movie. It is a glorified, overly long recruitment video for the US Navy.

For those who cannot see the forest through the trees, who embrace meaningless production trivia over actual filmmaking, movies like Act of Valor will perhaps hold your attention. Films like Act of Valor sell themselves on their cliched, artificial patriotism and “authenticity,” to entice droves of patriotic Call of Duty-fans and jingoistic rednecks to theatres. Act of Valor selling itself on the showcasing of active-duty Navy SEALs was nothing more than a dirty, sleazy, marketing gimmick. But hey, it worked! In today’s world, someone had better suck the box office dollars out of our conservative, rural population before they’re all gone, so that’s what this film did. In short, our Navy SEALs deserved a better film than this — and should have stayed far, far away from acting.

SUMMARY & RECOMMENDATION: Act of Valor is a pandering, dull bore that can’t move beyond its production gimmick. The ease with which our Navy SEALs execute their training can’t make up for the fact that this remains a movie, a movie where the majority of the running-time consists of those same SEALs being forced to recite awful lines some screenwriter hack conjured up. There are far better and more or less equally patriotic choices to choose from.

— However… some action scenes are fun.

? It’s easier to teach an actor how to sing than a singer how to act.