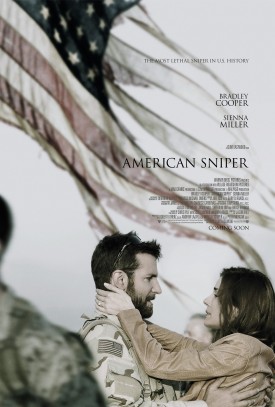 Truth be told, I’m impressed but not as surprised as everybody else in the critical and cinephile-sphere at American Sniper’s success, given my background. I was born and raised in moderately conservative rural Illinois, where long stretches of corn and soybean fields stretch well past the horizon and then some, where people most always vote Republican, the government is viewed with mistrust, and poor people receiving welfare “handouts” is worthy of a sneer. Respect for the military and American patriotism is overtly displayed there in both good ways and bad. As such, I was none too surprised when I went to my local theatre on Thursday night to see a packed house near my town of 12,000.

For my part, I thought Clint Eastwood’s Sniper was a tense, well directed, well written, and reasonably edited war picture that took ample but efficient time to establish a captivating portrait of the American campaign in Iraq. Like similar effective dramatizations of contemporary Middle East conflicts before it (e.g. The Hurt Locker [2009], Generation Kill [2008], Zero Dark Thirty [2012]), Sniper avoids an obvious political stance on the nature of modern war and America’s place in it.

Given the film’s rampant financial success, its title, its setting, and its autobiographical subject matter, American Sniper has prompted controversy. Numerous left-leaning critics, including many professional movie reviewers, have lambasted the film as American propaganda or glorifying a supposed bloodthirsty, psychopathic “patriot” or even compared it to the Nazi sniper film-within-a-film from Inglorious Basterds (2009), “Nation’s Pride.”

Aside from numerous people’s immature inability to separate warfare itself from the warrior (or the grunts fighting and bleeding on the frontlines as opposed to the fascist fucks who sent them there in the first place), the film itself is ambiguous in its assessment of its controversial subject matter, the most lethal sniper in US history, Chief Petty Officer (and Navy SEAL) Chris Kyle. While Kyle himself is portrayed as close-minded, crude, and quite conservative in that most proud Texan sort of way, he is also painted as emotionally conflicted, a loving father and husband, a masterful soldier and marksman, and clearly suffering from post-traumatic stress disorder (PTSD). On the one hand, he is an ordinary, compassionate citizen who wants to serve his country and protect his comrades-in-arms, and on the other, his daily job is to shoot down enemy combatants from afar, including any and all threats to the questionable American invasion of Iraq, be they men, women, or children.

The film asks the disturbing question: How does one deal with being considered a “Legend” (as his fellow Americans call him) or “The Devil of Ramadi” (as the Iraqi insurgents referred to him)? How does one comprehend and come to grips with being a masterful artist when one’s artistry is taking away life? Kyle’s arc as depicted in the film is simultaneously disturbing, tragic, and uplifting. Both the script by Jason Hall and Eastwood’s acting-direction bring out the best in star Bradley Cooper, who is absolutely on fire here. Cooper bulked up in both body and mind to portray a battle-hardened, heavily conflicted war veteran whose mind and morality gradually goes to shit as the war rages on. It’s his best acting effort by far.

Eastwood stages the sniper missions and battle scenes with great precision and paces the intense war action with intermittent but emotionally resonant scenes back home. The way Eastwood balances the intensity and force of the military bravado with its realistic repercussions back home is the film’s greatest strength. As Kyle’s kill-count rises, his fame and infamy among his comrades and enemy combatants, respectively, takes a toll on Kyle’s sanity. After Cooper shoots down his first targets in the streets of Iraq, a mother and child attempting to blow up a tank and accompanying squad with a RKG-Russian grenade, his watch partner guffaws and heartily congratulates him as the average action-junkie moviegoer might with a pat on the shoulder, only to be rebuffed by Kyle, “Get the fuck off me!”

With all that said, I believe my thoughts on this film’s artistry, shortcomings, and general political impact are best summarized by The Boston Globe’s Ty Burr. As he put it: “Sniper is a story told strictly from an American soldier’s point of view, with the relevant honesty, blind spots, dissonances, defensiveness, pride, professionalism, and self-loathing put out there for all to see. Beyond that, there’s an innate understanding that anyone who wasn’t there — be they a filmmaker or a movie critic or an audience member or a bloviator on the right or the left — can never comprehend the experience, and that those who were there share an unbreakable, inexpressible bond.

Beautiful imagery from the film’s glorious location-shooting. Either that, or that’s some impressive CGI.

Which hasn’t stopped us from using American Sniper as a hankie to weep uncomplicatedly in or a stick with which to bludgeon others, both responses at the expense of the mixed messages its maker intuitively and (I believe) consciously put there. So many audiences are coming to this movie to have their beliefs mirrored and reconfirmed, holding on to the parts that jibe with what they want to see and tossing out the rest. Ask yourself: Is that Eastwood’s fault or is it ours?”

?  If you think that this war isn’t changing you, you’re wrong.