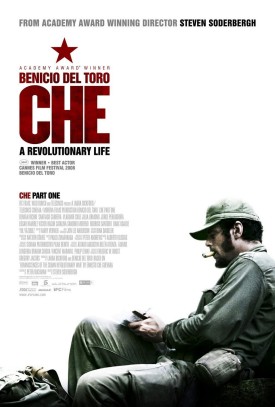 Guerrilla filmmaking is arguably the purest form of independent film production, stripping budgeted filmmaking to its bare bones and forgoing “frivolous” major studio protocol like filming permits, indoor studio sets, or digital special FX of any kind. Oftentimes, these scrappiest of independent filmmakers risk lawsuits, damaged reputations, or even their health and safety for the sake of cinematic purity, the most unapologetic or unembellished cinematic truth.

While Steven Soderbergh’s Ernesto “Che” Guevara biopic is far from chump budget filmmaking (its combined budget for both two-hour parts is about $58 million), the style with which its dialectic story is shot and its near decade-long development hell due to unreliable international funding embraces a range of blunt, grimy cinema verite aesthetics that would make Jean Rouch proud. Combine these truth-seeking documentarian aesthetics with Che’s Marxist revolutionary subject-matter, and you produce a volatile “big budget” independent feature.

Che’s biographical narrative format evolved from its earliest incarnations in the late 1990’s to its release in 2008, both before and after Soderbergh was elevated to the director’s chair after originally serving as a producer alongside star Benicio del Toro and Laura Bickford. Much of the financial struggle and language format problems Soderbergh struggled with during the production of Traffic (2000) returned for Che, forcing his producers to be creative with their choice of location photography and production crews. In its finalized structure, Che compares and contrasts two revolutionary campaigns: The successful Cuban Revolution in which Guevara, Fidel Castro, and others toppled the Fulgencio Batiste regime from 1957-59, and the failed 1966-67 Bolivian campaign wherein most of Guevara’s team was captured or killed, and where Guevara himself was executed.

Both acts are highly specialized in terms of screenplay format and cinematographic style. The former part, titled The Argentine, is based on Guevara’s diaries and recollections of the Cuban Revolution after the fact, where as part two, Guerrilla, is adapted from his journals written during the doomed Bolivian campaign, which lack any perspective or hindsight. As a result of these disparate tones, The Argentine was shot anamorphically and stylized in the manner of a Hollywood war film, boasting impressive color palettes, powerful voiceovers, and choreographed motion-controlled tracking shots, often on dollies or SteadiCams; this section also follows Guevara’s 1964 address to the United Nations in New York, as well as his famous interview with Lisa Howard; conversely, the more intense, limited focus of Guerilla feels akin to a traditional “indie drama,” using handheld cinematography or tripod shots against a muted, depressed color palette and no cross-cut commentaries.

Neither of these acts focus on Guevara’s life outside his revolutionary aspirations; Che is about Guevara the Marxist, the political and military leader, not the pre-revolutionary Argentine nor the family man. Che, as such, feels little like most Oscar-bait biopics despite its mammoth running time and almost mythical subject figure. Much of the film concerns the daily grind of guerrilla life and warfare, from building shelters and securing supplies to recruiting civilian volunteers to preparing food. Both parts of Che are collective action stories, comparing the optimistic underdog success of the Cuban Revolution with the pro-American capitalist response and pessimistic failure of the Bolivian uprising. The focus is always on the group, led by Guevara, but never defined or overwhelmed by Guevara, emphasized by the lack of close-ups on del Toro or most any other actor, for that matter. Both The Argentine and Guerrilla are dominated by medium, long, and extreme long shots.

Che’s best examples of collective warfare cinematography are in the penultimate climaxes of both acts. In The Argentine, Soderbergh’s use of wide angle action photography contrasts the slow, steady collapse of the authoritarian Cuban regime during the Battle of Santa Clara with Guevara’s capture by Bolivian forces in Guerrilla. Where as the former showcases exhilarating urban warfare crosscut with scenes of increasingly disillusioned and apathetic response within Batiste’s forces, Guevara’s last stand against coordinated, relentless assault by Bolivia’s counterrevolutionaries plays like a horror sequence. The ominous Spanish valleys threaten to swallow Guevara’s diminished military campaign at every turn, and remind me of the foreboding Mexican jungle photography from John McTiernan’s Predator (1987).

Benicio del Toro’s portrayal of the famous titular revolutionary is more reserved and atmospheric than one would expect for a biopic of this size and stature, let alone for such an incendiary figure as Guevara. Del Toro is the face of this film, to be sure, but not like Heath Ledger’s Joker in The Dark Knight (2008) or Daniel Day-Lewis in There Will Blood (2007) — Soderbergh’s collectivist cinematography and Marxist dialectic tone overwhelm the film thematically, including del Toro’s representation of Che, exemplified in the aforementioned absence of close-ups, as well as the omission of charismatic monologues, significant romantic subplots, or general Hollywood schmaltz. Even at his most aggressive, del Toro the actor remains a team player as much as Guevara the revolutionary was, to the point where notable supporting roles by Demian Bichir as Fidel Castro, Rodrigo Santoro as Raul Castro, and Franka Potente as Tamara Bunke play almost as influential roles in the narrative as del Toro.

Perhaps a more accurate, honest title for Che would be “The Philosophical and Revolutionary Manifesto of Che and his Allies,” because the film is more about his physical implementation of Marxist ideology (re: class warfare) than a holistic biography. Che is a detailed but not comprehensive analysis of an important but singular aspect of Guevara’s adult life, and as a result differs from traditional biopics that attempt to flesh out the entire adult lives or even the entire lives of their subjects, e.g. American Sniper (2014), Jodhaa Akbar (2008), The Theory of Everything (2014), Ghandi (1982) or Mesrine (2008).

Che is a summary of its titular protagonist’s greatest Marxist victory and defeat, and given its script and Soderbergh’s dedication to that stylistic contrast, the film speaks to a much wider audience than wannabe revolutionaries or guerrilla filmmaking enthusiasts. It is too large-scale and bombastic to be considered guerrilla cinema verite, and yet it is a far cry from the saccharine, emotional biopics featured at every Academy Awards ceremony. That exceptionalism is what makes Che one of the finest semi-biographical pictures about a major historical figure — its willingness to abandon both reverence and cynicism for its subject.

Che addresses the United Nations in his classical spitfire tone.

SUMMARY & RECOMMENDATION: Steven Soderbergh crafts arguably his most ambitious film in the miniature anti-Hollywood war film/super-indie biopic of Che. Benicio del Toro dissolves into the collective Marxist wisdom of Ernesto Guevara, embracing both the strengths and weaknesses of his strong supporting cast, while Soderbergh and cinematographer Peter Andrews mold them into a dialectic conversation of revolutionary socialist victory and failure.

— However… at over four hours in length, Che is more miniseries than standard feature-length film, and parts of the latter act, Guerrilla, grow exhausting.