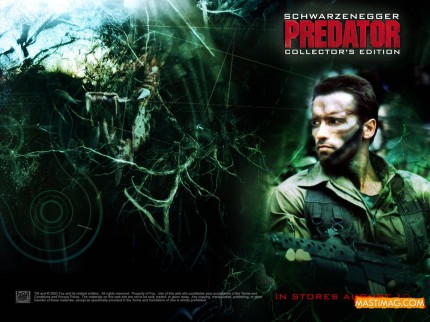 “In a part of the world where there are no rules, deep in the jungle, where nothing that lives is safe, an elite rescue squad is being led by the ultimate warrior. But now, they’re up against the ultimate enemy. Nothing like it has ever been on earth before… It kills for pleasure, it hunts for sport. But this time, it picked the wrong man to hunt.”

There are so many great moments, so many great lines, and so many visuals, both in classic 1980s action poses and in creepy, science-fiction heat-vision, that were made into iconic hallmarks of that decade’s action genre, as well as science-fiction in general, by the classic 1987 John McTiernan film, Predator. The movie is often mentioned with other hallmarks of the macho, violent, action-packed decade of the era, such as Commando (1985, aptly titled), the Rambo series (1982, 1985, 1988), Die Hard (1988), Bloodsport (1988), Cobra (1986) and Robocop (1987). 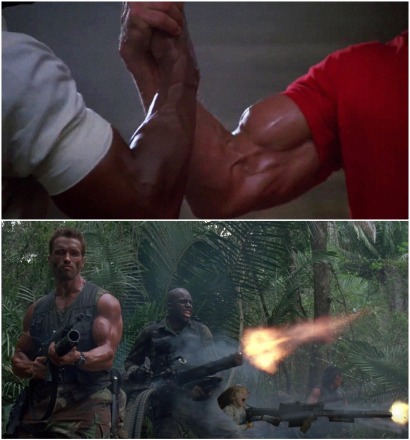 Although the 1980s were filled with as much action-schlock as any other decade, it had its great standouts as well, and the best of the best refused to be pigeonholed into a single, well defined genre. Predator has as much in common with sci-fi and suspense films as far as tone and cinematography are concerned, but its visual style and finishing garnish carry that definitive 1980s “tough guy”-coat. It’s this commando style that defined that era’s action films as a whole, regardless whether that image was merely skin deep or penetrated down to a movie’s core. The commando was the action icon, or visual label that best summarized blockbusters of that decade, much like the comic book superhero (e.g. Batman, Superman, Spider-Man, The Avengers) defined the 2000s and 2010s.

Although McTiernan’s companion classic to his most famous film, Die-Hard, has never been considered on the same level of its sister franchise’s best film, James Cameron’s Aliens (1986), it is a far deeper movie than its IMdb or DVD description suggests. The first 30 minutes is definitive commando-action, with giant explosions, giant guns, and heavily muscled stars shooting everything in sight. After the initial wave of carnage subsides, however, the movie’s primary tone takes over, making Predator resemble far more of a suspenseful thriller. Predator takes the concept of invincible, muscle-bound heroes with even bigger guns and turns it on its head. After taking ample time to illustrate how badass and deadly its cast of commandos are, the narrative uses that idea to inject a dose of foreboding into the audience. Within minutes of our heroes’ thorough annihilation of an entire enemy compound, the film reveals that a far more sinister, malevolent, and deadly force is stalking the commandos from just out of sight. All of a sudden, our team of invincible action heroes don’t seem so invincible anymore, and that’s what makes the story so interesting.

The technical aspects of Predator are stellar. The camerawork ranges from violent, bombastic, over-the-top action to more suspenseful, slowly paced, racking focus telephoto shots to the infrared perspective of an otherworldly hunter, sensing the heat that rises from the bodies of our protagonists. This wide range of cinematographic styles is impressive and integrated tastefully, transitioning from wide-angle action camerawork to creeping tropical ambiance without a moment of tonal confusion. The mood of the film as a whole is foreboding, but that dread is toned down in the early parts of the movie in favor of a more dramatic, action-packed opening, and then cranked up for the remaining 2/3 of the narrative. The fantastic screenplay lays the groundwork for this build in tension, but McTiernan’s camerawork translates it to the screen flawlessly. The location shooting in Central American jungles captures a sense of claustrophobia and the feeling of the forest steadily creeping in, threatening to consume our heroes like the titular beast itself. All things considered, the film crew, director of photography Donald McAlpine in particular, did a masterful job building the movie’s setting.

Our team of buff commandos is also a legendary selling point of Predator. Everybody does a great job and plays their simple, yet likable characters effectively. The stars are lead man, Arnold Schwarzenegger (in his best action role that isn’t a cybernetic Terminator), Carl Weathers (apparently on his day job when he isn’t busy punching Rocky Balboa in the face), Jesse (The Body) Ventura, and Bill Duke. They kick guerrilla-ass and spout off cheesy one-liners like it’s nobody’s business. Predator has some of the most memorable, quotable lines in the entire action genre, not just the 1980s. It doesn’t quite have the rich, natural, free-flowing dialogue of the first two Alien(s) films, but as far as badass, tough-guy quotes go, Predator is up there with the best of the best. Such as:

Come on, even Robocop doesn’t have one-liners this good. Predator’s dialogue isn’t just concise, personable, and effective, but also delivered by some of the more charismatic action stars in any American action movie, ever. 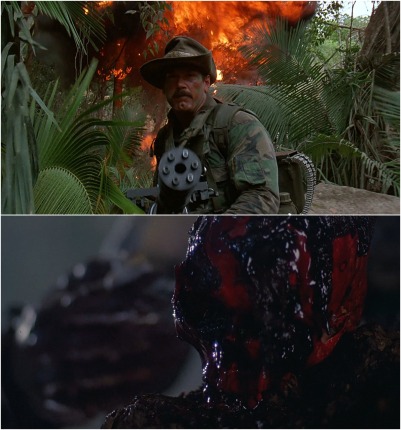 Top: Jesse Ventura guest-stars as Blaine, a commando with an attitude and a handheld M134 minigun dubbed “Old-Painless.” Bottom: The titular villain prepares its trophies.

But in all fairness, the most important element of these characters is their introduction. The most crucial part of the entire movie is the 3-4 minute scene that takes place inside a chopper as the characters are being flown to their drop-off point to begin their rescue mission. These four minutes are more critical than anything else in the whole narrative, because they are what everything else in the movie is based on. In the cool tinge of red lighting of the helicopter’s interior, the script takes minimal, but necessary time to establish the characters’ personalities, mannerisms, and quirks. We see that these commandos, while no doubt especially tough and bad dudes, also feel like normal people with likable senses of humor, and we, the audience, are able to relate to them enough in order to root for them for the entire story.

Predator is one of the best and most influential action flicks ever made, a staple of its generation and every bit the trendsetter that was John McTiernan’s more mass-appealing Die Hard (1988). Is it flawless? Of course not — among other things, there are a few too many instances where our heroes can’t seem to hit the intergalactic stalker in plain sight, and the eponymous antagonist’s camouflage FX have not aged well, but altogether, Predator gets so much right it’s impossible not to recommend. It’s a true science-fiction action-hybrid, and represents some of Schwarzenegger’s and McTiernan’s finest work in their prime.

SUMMARY & RECOMMENDATION: Predator is powered by a great script that establishes likable characters, paces itself well, and turns famous 1980s action tropes on their heads in creative ways. There are few, if any, action movies that are this macho and also this unique and intelligent. John McTiernan flexes his muscles as one of Hollywood’s all-time greatest action directors. The cinematography, particularly in the latter 2/3 of the film, does an excellent job of fleshing out the movie’s tone and creeping us the fuck out. This film features a true 1980s all-star action team.

— However… the number of times our macho characters shoot wildly at the jungle-creeper picking them off one by one and miss almost every time becomes unbelievable. The camouflage FX would have benefited from CGI.

? Science-fiction is not for nerds. Not when a seven foot tall terror with dreadlocks rips a guy’s spine and skull out of his carcass in a single piece. Creeps, maybe…