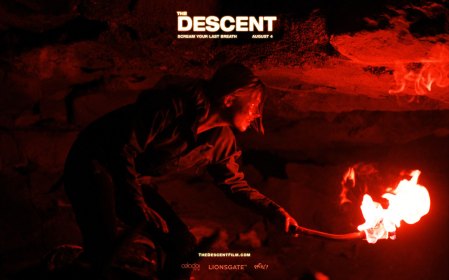 In light of all the brain-dead, boring, tiresome, overly gory, torture-obsessed, nauseating, sleep-inducing horror movies that have come out in the past decade alone, it is a relief to watch a modern horror film that is well written, that focuses on the subtle nuances of characterization and human fear, and is actually scary. The Descent is not a revolutionary horror film, but it is a smart, efficient, and visceral tale that pays attention to filmmaking basics, and in that light, it is a resounding success. For The Descent, it’s the simple things that make this spelunking nightmare work, and yet its narrative details are what make it an enduring adventure worth revisiting.

The Descent provides plenty of non-subterranean buildup before the real horrors start, enough material to make you care about the principle cast and deepen their character arcs. Not all of them end well, I’m afraid.

In terms of structure and screenplay efficiency, The Descent is as effective as they come. A brief gut-punch of a prologue establishes the bulk of our sisterhood cast, providing motivation and backstory that carries through the rest of the narrative. Shauna Macdonald and Natalie Mendoza are particular standouts for their character depth, emotional range, and chemistry with both each other and the supporting cast. The remainder of the cast fill out smaller supporting roles, and are mostly surface-level personalities, but they’re all well acted and avoid stereotypes.

What adds a further layer of depth to this film though, is the mix of character-relationships that play out ever so subtly in the background of the narrative. You may miss these seemingly extraneous details on your first viewing if you don’t pay close enough attention to what characters say, don’t say, and how they act around one another. Of course, you can simply enjoy The Descent as a straight-up horror flick with no chaser, but it is written well enough that its story and its characters’ actions can be interpreted on a variety of levels.

The film’s pacing is considerable. After a lengthy first act consisting of character-moments and setup, our cast embark on a girls’-only trip through an unexplored cave-system, which still withholds any gruesome troglodyte monsters or other horrific encounters. Act Two establishes tension and suspense, trapping our heroines underground in every claustrophobe’s worst nightmare. It’s not until the movie’s final thirty minutes that the feeding-frenzy starts, and from then till the action-packed conclusion, The Descent is wild ride of blood, bones, muscle, and sinew.

Neil Marshall, who broke out with his eclectic horror-action-comedy, Dog Soldiers (2002), embraces the darkest aspects of the horror genre, both in terms of violent betrayal and actual lighting. In addition to its succinct screenplay, dark character-motivations, and unbridled violence, The Descent features some of the best lighting FX and set-design of any horror film in years. The washed colors and overcast outdoor sets of the first act foreshadow and inevitably give way to the near pitch-blackness of the movie’s cave-sequences. Extreme low-key lighting dominates, providing a convincing, realistic backdrop to our characters, all while providing just enough illumination to maintain clarity of the actors, blocking, and framing.

The creatures and gore FX in the finale are well executed. The designs of the cave-dwellers themselves are not terribly creative, but like the Tremors (1990-2004) franchise or similar horror monster films, The Descent isn’t really about them beyond their thematic dread and the physical threat they present to our heroines. Like the rest of the movie, the antagonistic troglodytes are simple, efficient, and effective. 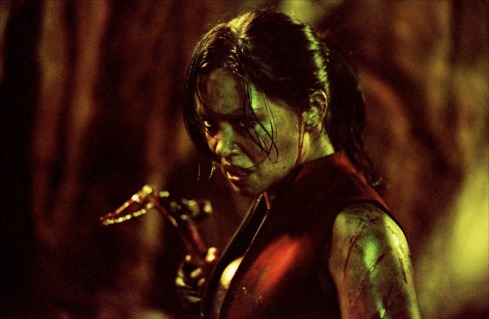 The Descent portrays an impressive lineup of characters beyond Shauna Macdonald’s protagonist, none more notable than Natalie Mendoza’s “Juno,” whose heavily implied relationship-status comes into play many times in the film’s cryptic screenplay.

The Descent is by no means the most terrifying or sublime horror film out there, but its smart, nuanced script shows how much fun it is to be scared by the mystery of the dark; it demonstrates how nailing the basics of horror storytelling (as well as a little attention to detail) can make all the difference in creating an unforgettable ride. Grab your girlfriends and get ready for some high-octane, blood-splattered thrills.

SUMMARY & RECOMMENDATION: The Descent is minimalist filmmaking at its finest. Writer-director Neil Marshall knows how to take advantage of our most basic fears and communicate terror to his audience with ease. The narrative can also be enjoyed and interpreted from multiple viewpoints, with an ambiguous ending that doesn’t provide any easy answers.

— However… some of the deeper character-motivations are almost too cryptic. You miss a few lines of dialogue in the first act and the visual payoffs in the third lose some of their impact.

? Good horror movies should always make you think twice about returning to their setting, be it a motel, an old mansion, a cemetery, or the ocean. I have reconsidered many times whether I want to go spelunking ever again.