As pointed out by a fellow blogger, werewolves have gotten the short end of the meatstick with regards to mainstream cultural acceptance relative to other classical horror monsters, namely the vampire and the zombie. Unlike their shambling undead or seductive blood-sucking brethren, werewolf features rarely claw their way into pop culture-focus other than in occasional niche projects. Vampires have legions of followers from Twilight (2008-2012), Vampire Diaries (2009-present), True Blood (2008-2014), Buffy the Vampire Slayer (1997-2003), and the Blade films (1998, 2002, 2004); likewise, zombies have been hot ever since 28 Days Later (2002) brought George A. Romero’s original creations roaring back with a vengeance, giving rise to the likes of The Dawn of the Dead (2004, remake), World War Z (2013), the Resident Evil films (2002, 2004, 2007, 2010, 2012, 2016?), and of course the incredibly popular Walking Dead television series (2010-present).

Boyz in the Wood

This pop culture dominance by vamps and dead-heads extends to various other forms of media (novels, videogames, etc.) and well into decade’s past. The average moviegoer will most always recognize or recall a Dracula (1992, or its many prior incarnations), a Nosferatu (1922), or a Night of the Living Dead (1968) before An American Werewolf in London (1981) or a Wolfman (1941).

Despite the werewolf being the near forgotten bastard child of classic horror monsters, many small-time filmmakers still pay them love as rich as any big budget vampire series. One of the best and most fun examples of this is Neill Marshall’s 2002 film, Dog Soldiers. If you know of his much wider distributed sophomore effort, The Descent (2005), you’re aware of his talent as a horror storyteller.

Dog Soldiers is, quite simply put, one of the most fun movies I have ever seen. It’s FUN, with a capital F, U, and N. The best way to describe the film is to compare it to other fun genre films, which Soldiers doesn’t rip off so much as it remixes; one could describe it as Aliens (1986) but with werewolf antagonists. Its structural resemblance to various zombie films — a small group of characters shelter in a remote location from numerous ghouls or similar hungry monsters —  is also notable. That being said, the idea of fighting fear with lead, or turning horror into fighting terror, wasn’t something that became associated with Dawn of the Dead-style premises until James Cameron turned Ridley Scott’s 1979 horror icon into his space-marine epic. Marshall does a remarkably similar thing with his werewolf villains. The film is incredibly simple, both in terms of its screenplay and directorial execution: A squad of soldiers hole up in an isolated cabin in the Scottish highlands and attempt to survive an onslaught of vicious attacks from a pack of werewolves. That is a setup to die for, my friends.

As you may have guessed, Dog Soldiers is a chump-budget, down-and-dirty production that embraces its true independent genre-film roots and all that comes with them. It was shot on Super 16mm and has a wonderfully grainy, old-school feel to it such that it probably could’ve been shot in the 1980s, yet feels so action-packed and exciting that it’s perfect for modern pulp entertainment. It’s also very well-paced, well acted, and has characters you aren’t embarrassed to root for and whose dire, tense situation you relate to, easily. Prolific English and Irish actors Kevin McKidd, Sean Pertwee, and Liam Cunningham all turn in great performances of which the squad of Corporal Hicks (Michael Biehn), Private Hudson (Bill Paxton), and Private Vasquez (Janette Goldstein) would be proud. 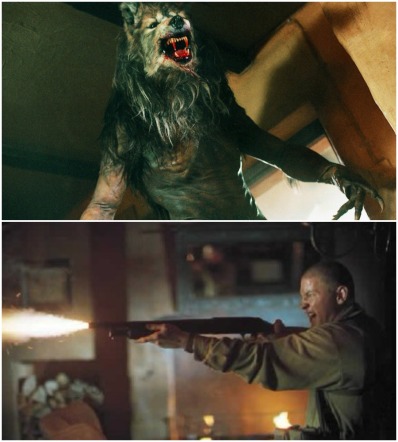 Needless to say, if you’re not into horror or low-budget genre films in general, you won’t find much here that will sway you from your current cinematic persuasions. Dog Soldiers is incredibly well made, efficient, and effective horror-action (terror?) filmmaking that’s all muscle, bone, and sinew with very little fat. It’s pure genre-pulp at its finest. Someone who doesn’t find the thought of Scottish soldiers blasting away anthropomorphic wolves with machine-guns appealing probably won’t appreciate this film to the fullest, but for what it is Dog Soldiers is an extremely well crafted and refreshing take on a mostly under-appreciated horror subgenre.

SUMMARY & RECOMMENDATION: Marshall’s soldier-boys are just fun, fun, fun(!), giving us one of the finest takes on both werewolf archetypes and the Aliens-premise in years. The film is every bit as exciting and entertaining as it sounds.

— However… there’s too much shaky-cam for my taste, and some of the incessant teasing of the werewolves themselves is unnecessary. This is action, not suspense.

? We are now up against a live, hostile target. So, if Little Red Riding Hood should show up with a bazooka and a bad attitude, I’d expect you to chin the bitch.