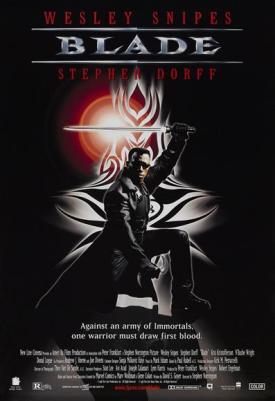 As I’ve watched more films and studied more about cinema in higher education, I’ve come to appreciate the visual power of cinema and the default auteurship of films’ directors over, say, their screenwriters or even their producers. While great cinema can convey its visual power subliminally and reach even the most disinterested viewer through their subconscious alone, when the layman attempts to describe the strengths or weaknesses of a particular movie, they usually refer to the film’s content or narration, the characters and the story, and almost never the inherent cinematic aspects of film like cinematography, editing, framing, or overall direction.

This is not to say that general audiences don’t appreciate good cinema when they see it — I maintain that most unappreciated film art is due to unfair distribution practices and major studio greed over audience apathy and ignorance (though both are a significant problem) — but as a rule, it’s difficult for us to describe exactly how or why a filmic story works when the craft of filmmaking is so complex and requires the input of so many people. Cinematic terminology is not intuitive. That being said, screenwriting and characterizations are critical in any type of cinema, but what most people (even many self-proclaimed “movie buffs”) constantly overlook is how the strongest cinema is conveyed visually, i.e. principally through a director’s camera rather than a writers’ pen. The screenwriter dictates what content is shot, but a director dictates how that content is shot; the “how” supersedes the “what” in filmmaking. 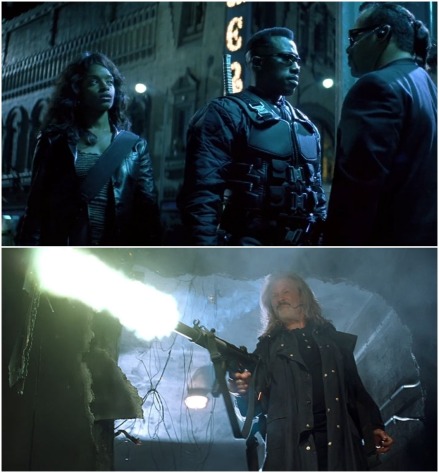 Top: N’Bushe Wright learns the ways of the vampire world from Blade. Bottom: Catch you fuckers at a bad time?

As such, watching films that have mediocre screenplays but great direction, like the first two Star Trek reboots (2009, 2013, both written by Alex Kurtzman and Roberto Orci and directed by J. J. Abrams), illuminates how cinema operates as a visual language, how much control and power a director can (and should) assert over a story. This of course brings us to the Blade series (1998, 2002, 2004), a franchise that was written by fellow mediocre screenwriter David S. Goyer but competently directed by Stephen Norrington in 1998 and then Guillermo del Toro in 2002. When Goyer took over to direct the third film in the series, Blade: Trinity, things didn’t work out so well. Good direction can salvage crappy writing, but crappy writing and directing won’t get a movie anywhere.

The original Blade character, created for Marvel Comics’ 1970s The Tomb of Dracula series, was very different than what we got on celluloid. He was written in the comics as an otherwise ordinary human vampire-hunter whose only “superpower” was immunity to vampirism, vastly different from the dhampir “daywalker”-hybrid badass that Wesley Snipes would become. This is where I give Goyer some credit for updating and modernizing an anti-hero badass that ended up being way cooler than his depiction in the source material; like George Lucas, Goyer has always been better as a producer or general “idea-man,” the guy who envisions premises and stories rather than writing (or directing) their final drafts; then again, nobody deserves more credit for the movie-Blade than Norrington, del Toro, and of course Snipes himself.

Blade was the first notable comic book-adaptation following the disaster that was Joel Schumacher’s Batman and Robin (1997), as well as the first good superhero movie starring an African-American lead (the first actual one was 1997’s Spawn). Despite an inconsistent story and lackluster villain, Blade is one of the coolest films of the 1990s. The opening scene, which features an awesome nightclub sequence and a bravado introduction of Blade’s character, is one of the slickest opening sequences I’ve seen on film. I struggle to think of movies that start stronger than 1998’s Blade, save for something like Saving Private Ryan (also 1998, coincidentally). See for yourself.

What makes this movie is Snipes’ brilliant, badass portrayal of the title character and Norrington’s commitment to a dark, brooding, violent tone. Blade features gallons of blood and gore (it better, it’s a fucking vampire movie… ) and is about as hard R-rated as you can get, all the while maintaining an incredibly grim, almost noir-like lighting scheme and narrative mood. Blade’s superpowers and Snipes’ endless screen presence aside, Blade barely feels like it was adapted from a comic book at times, which quite frankly could explain much of its coolness. I mean, Snipes stabs a silver stake through a guy’s skull and impales him into the ceiling! Not a wall, not the floor — the ceiling.

However, Goyer’s lackluster pacing, often corny dialogue (for the villains, not Snipes, thankfully), and a miscast villain drag down the fun. Norrington’s competent eye for style and superb on-screen violence make up for the mediocre script, but Stephen Dorff as the principle villain, Deacon Frost, was a mistake. Dorff is a fine actor and he does an admirable job with the material given to him, but the decision to cast a younger, upstart villain against Snipes’ mature, collected anti-hero doesn’t work. I really think the character should’ve been aged up to feel more like an equal to Blade. Frost just doesn’t feel worthy of the adventure.

On the other hand, Snipes’ supporting cast on the hero-side of things are perfectly cast. N’Bushe Wright makes for the perfect fish-out-of-water character to introduce us to this dark, twisted, vampire-infested world, and is an interesting figure in her own right. Kris Kristofferson stars as Abraham Whistler, Blade’s mentor and surrogate father, one of the best parts of both this movie and its 2002 sequel. The relationship between Kristofferson and Snipes gives Blade real heart, a crucial human element that lends uncommon depth and emotion to a tale otherwise so cynical and dark.

Altogether, I think it speaks to the strength of the film as a whole that its reputation remains so fabled and respected over a decade later, despite boasting a so-so script and a miscast antagonist. Blade and its first sequel remain one of the few graphic novel-adaptations to not only maintain their unique flavor on-screen, resisting the urge to compromise their hardcore style for mainstream appeal, but also to flourish and find new life entirely outside their source material. However much David S. Goyer may have been both the genesis and the destruction of this franchise, Stephen Norrington and Wesley Snipes started this saga off right and accomplished one of the most badass genre-hybrids in cinematic history.

SUMMARY & RECOMMENDATION: Norrington not only knows how to keep a grim, irresistible mood, but also stages fight-scenes that are violent, bloody, and take full advantage of Snipes’ star power. Snipes makes the titular role his own, and no one will ever take it from him. Blade also features a great soundtrack and memorable costars, including Wright’s effective female lead and Kristofferson’s endearing father-figure.

— However… Goyer’s script hurts the film as much as it helps it. Too many lines are too corny for no reason, and Dorff was miscast.

? You better wake up. The world you live in is just a sugar-coated topping! There is another world beneath it: The real world.