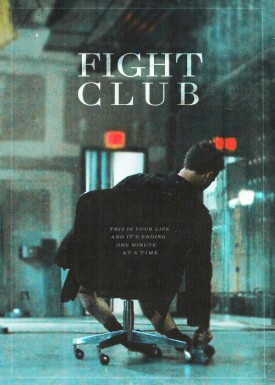 While many films that are either soundly rejected or universally lauded upon release often fade into obscurity or retain mild cult recognition years later, controversial, divisive projects, which are often too complicated or bizarre for even most film academics and critics to understand, often claw their way into respected classic-status sooner or later. Even if these films, like Blade Runner (1982), A Clockwork Orange (1971), or Taste of Cherry (1998), are far from perfect cinema, they cause a stir for a reason, be it their ideological ambition, their cinematographic innovation, or their sheer thematic bluntness.

Fight Club is similar feature I would place in that category, a type of film that polarized critics and achieved more notable financial success through word-of-mouth and DVD sales than studio-marketing or box office. I’m still waiting for director David Fincher’s most quotable masterpiece to be inducted into the Library of Congress’ National Film Registry, though I believe my days of waiting are numbered. If FC is anything, it is culturally, historically, and aesthetically significant. Fincher has long since proved he is a master of his craft, adapting popular crime/pulp novels like Gone Girl (2014) into superior films or remaking overrated foreign classics like The Girl with the Dragon Tattoo (2009) into far more interesting big-budget, Hollywood productions. He has come a long way from the bullied rookie filmmaker behind Alien 3 in 1992, and he remains my pick for the top working director in the world today — not in America, in the world.

FC represents Fincher’s first foray into cinematic adaptations of popular literary fiction, and without question the story’s cinematic version has long since outrun its print-counterpart both in terms of objective quality and cultural relevancy, again much like Gone Girl. The simple reason for this is that Fincher is a much better filmmaker than most novelists are writers. He uses a glorious cocktail mix of digital effects, American New Wave-style editing, and his now classic grungy, grimy visual style blended with a healthy dose of black humor to comment on a modern “lost generation.”

First you make the soap, then you get to fight.

What makes that commentary so interesting is how ambiguous and self-aware the film is with regards to its endless satire, philosophical preaching, and psychoanalysis. On the one hand, we have a vicious social satire of modern consumerist culture, a main character who essentially is the Che Guevara of imaginary friends, and an inward journey for self-actualization and self-expression, yet the film is a $60 million Hollywood production featuring tons of product placement, nearly 18 years’ worth of its own merchandise, and boasts a protagonist who becomes wholly disillusioned by the ideological rebellion his alter ego champions by the end of the movie. The film is inherently self-contradictory, but Fincher and everyone involved in the making of this movie are aware of this and allow the story to take note of that as well.

The initial plot premise is this: A nameless everyman (Edward Norton), embodies the late ’90’s archetype of the young adult male who cannot find peace in his first-world existence — he is financially and culturally accepted, yet he cannot emotionally accept or respect himself because his identity and feelings have become numbed by a mindless consumerist/capitalist society that orders him to behave and act in a way that is unnatural.

As this view often gets lumped in with the hypermasculine, politically incorrect view of humanity by leftist film critic circles, I’m sure many journalists who initially rejected FC had a problem with its thesis right from the get-go. FC does preach this message through its effective mouth-piece, Brad Pitt’s unforgettable Tyler Durden, but the flipside of this coin is Norton’s conflicted yet ultimately far more down-to-earth voice of reason. Pitt is the sexier, darker, more enigmatic figure of our fantasy selves, the impulsive collection of natural instincts known as the Freudian id, yet he lacks a moral voice and sense of maturity or reason because he is little more than a schizophrenic hallucination of Norton’s subconscious. Pitt’s Durden offers many enticing methods to unleash our numerous repressed fantasies, and also points out numerous uncomfortable truths about the natural human condition and its inherent conflict with our emasculated modern society, yet in the end we relate with Norton’s everyman because he is who we are, while Durden is merely who we want to be.

Fincher emphasizes these themes with his now typical Kubrickian visual methodology. Fincher’s world of Fight Club is filled with blood, dirt, and urban decay, made all the more foreboding by his ever present low-key lighting. There’s also barely any handheld or unmotivated camera movements in any scene. The man demonstrates character motivations, control, emotional status, and story development through the smallest details of editing and camera placement. The juxtaposition of Fincher’s subtle camerawork for the majority of the film’s dramatic exposition against the effects-heavy set-pieces adds strengths to both styles precisely because of his commitment to both methods. He only uses flashy New Wave-style montage when he needs to, yet he executes it with full authority when he does. On the other hand, he consistently relies on stationary tripod shots, smooth, motion-controlled camera-pans, and the subtlest of cuts to depict the majority of the film that builds to the aforementioned memorable centerpieces.

His representation of Norton’s split personality, for instance, is depicted in one particularly brilliant yet quiet setup where Norton’s protagonist addresses Helena Bonham Carter’s character, the latter whom is trying to pry into the former’s bizarre behavior and psyche. Norton is being told what to say by Durden’s little voice in his ear, who speaks softly from the buildings’ basement, the door of which is being held slightly ajar by Norton. As Carter continues to nose around, trying to unspool Norton’s thoughts, the alter ego Durden, and by extent Norton’s everyman, Jack, literally shuts her out as Norton slams the basement door in her face and informs her, “This conversation is over!”

Left: The people you are after are the people you depend on. We cook your meals, we haul your trash, we connect your calls, we drive your ambulances. We guard you while you sleep. Do not fuck with us. Right: This Fight Club stuff is hard.

Fight Club is the sort of cinematic narrative you laugh and gaze at, jaw agape, your first time through and then appreciate that much more the second time around. Most of Fincher’s films benefit from multiple viewings and actually become more entertaining with repetition, as a matter of fact, but Flight Cub is perhaps the best example of how well his craft holds up and how ambiguous his storytelling can be. There are few filmmakers who can adapt the darkest, perviest fantasies of the human mind and artfully dissect them into A-list pulp films that even the dimwitted masses can appreciate. I suppose that’s the mark of a true filmmaker, someone who can take any concept, no matter how “lowbrow” or B-movie-esque and do it A for the critics, and by the same logic take any Oscar-bait formula and digest it into something that is actually dramatic and cinematic. Fight Club is all those things and then some. Just don’t talk about it.

SUMMARY & RECOMMENDATION: Fincher peaked in the mid to late-1990’s and still hasn’t come down to earth with the rest of us simpletons. His simultaneously restrained yet flashy camerawork depict a grimy world alive with colors, human desperation, repressed fantasies, and violent philosophical ideology. Norton, Pitt, and Carter lead a powerful cast bursting with great one-liners, physical comedy, and emaciated dedication to their roles. Jim Uhls’ effective adapted screenplay boils Chuck Palahnuik’s groundbreaking literary themes into a roller-coaster of a cinematic story.

— However… Fight Club’s climax remains somewhat unbelievable even after repeat viewings. Some of the gross-out gore and grime wears on you, particularly in regard to likable characters whose repeated punishment or deaths seem merciless or cruel. Then again, that may be part of the movie’s point.

—> Fight Club comes HIGHLY RECOMMENDED, though I’m sure it doesn’t give a shit.

? You met me at a very strange time in my life.