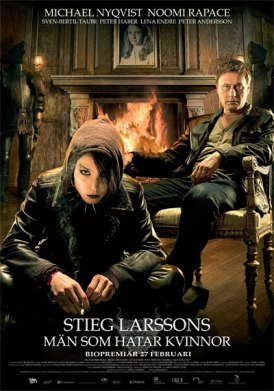 Given how popular Stieg Larsson’s Millennium (2005, 2006, 2009) novel-series has become, the explicit and controversial material they discuss (murder, sexual assault, extreme misogyny, among others), and finally, word spreading that famed veteran director, David Fincher, would soon be directing an English-language Hollywood adaptation of the first novel, I knew I had to sit down and watch the original Swedish adaptation of the famous Millennium novel, The Girl with the Dragon Tattoo, or as it was originally titled, Men Who Hate Women. Larsson’s dark story concerning the collaboration of a disgraced journalist, Mikael Blomkvist (Michael Nyqvist) and a sort of prototype, female-James Bond, the computer hacking social delinquent, Lisbeth Salander (Noomi Rapace), to track down a killer of women, is intact in the original Swedish film version. 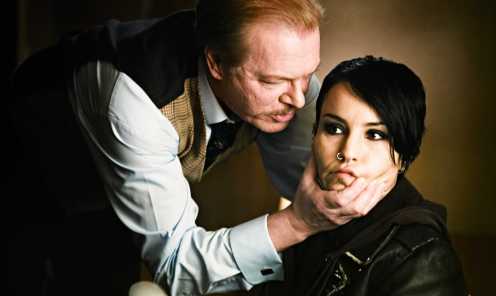 As I always argue, it is perfectly natural for a story to be different on film than it is in a novel, because films and literature are two entirely different mediums with their own strengths and weaknesses. There is nothing inherently wrong with adaptations being different than their source material; contrary to popular belief, most film-adaptations from novels that fail do not fail simply because they were different from the novel on which they were based. It is often the opposite case that emerges, rather, in which a film-adaptation is worse than its source because it stuck to the original story too much in a medium (film) that didn’t suit that style. Too many popular book-series’ fans live under the false delusion that all film-adaptations (or at least the good ones) must be as close to the source material as possible. That is a completely naive and ignorant assessment of film and art-theory in general. Stories in film will be different than those same or related stories in literature. Differences between the two are not inherently good or bad. Those differences, in and of themselves, are entirely neutral qualities.

With that said, we can discuss the 2009 Swedish-language adaptation of The Girl with the Dragon Tattoo, or Men Who Hate Women, whichever you prefer. The story itself, as I mentioned, is mostly intact in the movie from top to bottom. There are some minor changes here and there, but nothing substantial has been altered.  The main plot about a mystery serial-killer and rapist lurking somewhere in a reclusive, aristocratic Swedish family that gave birth to, among other things, multiple Nazis, is absolutely chilling at every turn. The dark terror of the narrative is as disturbing as the scariest horror film. Dragon Tattoo, in many ways, feels like the novel or film version of a Nine Inch Nails album, which would later make it fitting that Reznor would collaborate with Fincher once again for the American remake’s soundtrack. The disturbing central plot is by far the best thing about Dragon Tattoo. The setting builds the mood flawlessly.

As for the characters themselves, the “normal” protagonist of Mikael Blomkvist is likable enough, and is the one important character who is not a complete weirdo. That’s important, because everyone besides him gives you the creeps; it’s nice to have someone you can relate to. The real star of the show, though, is Lisbeth Salandar, who is a slick, savvy, and tenacious heroine who is not be trifled with. She reminds me of a “female James Bond,” someone who can subdue her enemies with style, but knows when to hold back and the right times to play her cards to her greatest advantage.

All this writing is well and good — actually, the adapted screenplay is outstanding. However, things seem to have gotten lost in the translation from script to the big screen. This case-study with the 2009 Swedish Dragon Tattoo vs. the 2011 American Dragon Tattoo brings up a rare exception to the standard inverse relationship of film-budget-to-film-quality. What I mean by that is, usually, when film’s get bigger budgets and their production values soar, the quality of the final film tends to suffer, because the filmmakers are less creative due to the fact they have so many resources at their command.

That inverse relationship concerning film budgets does not apply here. Not one bit. The 2009 Swedish film version of Stieg Larsson’s Dragon Tattoo looks, sounds, and feels so lazily slapped together, that the cheap production-values nearly ruined the entire experience for me. It is unbelievable what has happened here, especially for a viewer like me, who is demanding of good narratives with strong character arcs. Both of those are present in Dragon Tattoo 2009, but the story and characters were let down by the direction and acting — because the direction and acting are that bad. Everything, from the set-design to the cinematography to the performances are sloppy. I thought I was watching a made-for-TV-movie from the 1990’s. 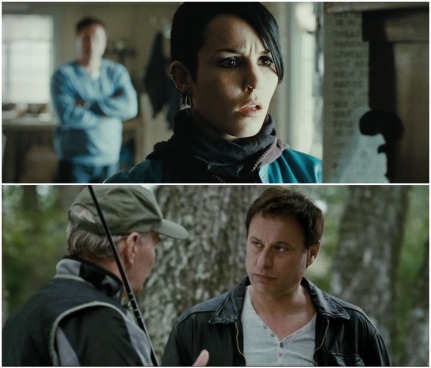 While Noomi Rapace holds her own in the lead role when she isn’t yelling her emotions, everyone else looks like they were pulled straight from a soap opera before they recited their lines. Michael Nyqvist is particularly bad as the disgraced journalist who later teams up with Rapace’s character. I don’t care how famous he is back home, because he doesn’t deliver in this movie. The way these actors perform on screen is like watching a Garfield or Peanuts cartoon, where you can see question marks appear over characters’ heads when they are puzzled, and exclamation marks when they become excited or alarmed. The acting is so terrible that it, along with the laughably cheap look of the film as a whole, essentially ruins the brilliant adapted screenplay.

People have blabbed to me over and over how much they love this film, and how heretical it is that Hollywood decided to make a remake a mere two years after the 2009 Swedish film’s release. Given the product on display, I’m not sure what the big deal is with remaking a substandard film like this. It may be based on a great story, but by no means is the 2009 Girl with the Dragon Tattoo a good movie. I guess it just goes to show that all trends in filmmaking have exceptions — big budgets and flashy CGI don’t always ruin movies. They often do, but every now and then, that painful reminder that filmmaking is a collaborative artistic process creeps forward.

I think this is as great a time as any to point out that just because a movie is labeled as “foreign” or “artistic” or “independent” does not in any way, shape, or form, ensure quality. I hate pervasive, mass-produced Hollywood schlock like Transformers and Adam Sandler movies as much as the next snob, but I also hate bad movies in general, regardless of where they are made. Bad movies can be and are made in every country and in every industry. If you think otherwise, then you really need to stop and realize how the world works. Ignorance ain’t always bliss, so don’t fool yourself into thinking that Niels Arden Oplev’s 2009 The Girl with the Dragon Tattoo is good movie — because it’s not. It’s a lazy-ass movie.

SUMMARY & RECOMMENDATION: The Girl with the Dragon Tattoo may be a great story, and this version does contain the novel’s actual native language, but those features alone cannot override the film’s terrible, cheap-looking sets and sloppy direction, which take away from the emotional story. The acting, minus Rapace’s performance, is distractingly bad, and removes nearly every shred of tension from the visceral plot.

— However… it is a great story, don’t get me wrong. It just looks and sounds and acts like shit.

? “I’m not a Hollywood basher, because enough good movies come out of the Hollywood system every year to justify its existence, without any apologies.” — Quentin Tarantino

I love movies, music, video games, and big, scary creatures.
View all posts by The Celtic Predator »
« ‘A Better Tomorrow’ (1986): An Early John Woo-Misfire
‘The Girl with the Dragon Tattoo’ (2011): The David Fincher One »