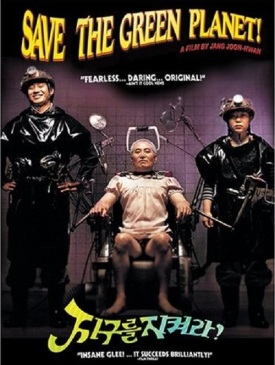 One must emphasize the exclamation point(!) in Save the Green Planet! It is indicative of both the film’s tone and its ridiculous subject-matter. The film is one of the wackiest and most unpredictable movies I have ever seen. Few other movies will keep you guessing like Save the Green Planet! (SGP) does, and that is one its greatest strengths. The unpredictable nature of writer-director Jang Joon-hwan’s picture stems from its ability to bend multiple genres to its will. Throughout the story, elements of science-fiction, comedy, horror, and thrillers combine to create a fantastic cocktail of genre-blending excess. 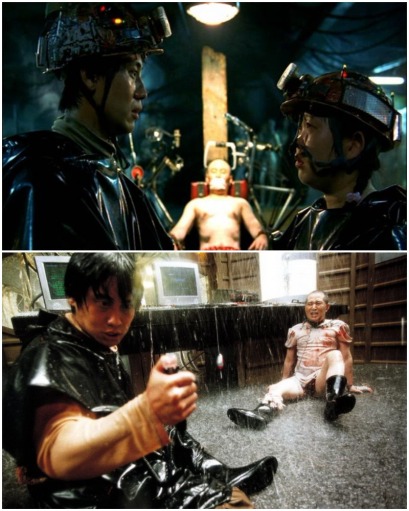 Top: Get ready for one of the craziest adventures you’ll ever see! Bottom: Despite being over-the-top throughout much of its running-time, SGP has so much genuine drama and raw emotion that it’s as intense as the hardest thriller or the bleakest period biopic.

Still, like any character-driven narrative, SGP swims or sinks on its characters who guide us through this lightning-in-a-bottle type adventure. The easiest way to conceptualize SGP is to the think of Stephen King’s Misery (1990) but shot from the perspective of the kidnapper. Jun-hwan does a great job of making the otherwise insane, despicable protagonist feel sympathetic, portraying him as a tortured soul and a victim of a tragic life. His development and persistence is what makes this story so interesting, and many of the flashback montages are as hard to watch as many of the gags are hilarious.

SGP is further bolstered by an impressive supporting cast whom you root for almost as much as you hope the kidnapper, Shin Ha-kyun, somehow recaptures his sanity. It’s akin to the first season of The Wire (2002-2008), where you root for the drug lord gangsters almost as much as the cops trying to catch them. Everybody has an agenda, and they all behave realistically in trying to achieve their goals.

The ending itself is an out-of-left-field type climax, although the narrative unfolds in such a way that it can be interpreted as having alternate endings, just like The Return of the King (2003). Overall, the movie is such a great journey that its quasi-ambiguous ending is a bonus.

SGP is, at the end of the day, a great mix of genre-blending and impeccable direction on the part of Jang Jun-hwan. His visual aesthetic is flashy and stylized, making his story look, sound, and feel much like Fight Club (1990), a similar black comedy with big themes and wacky characters.

The movie becomes more nuanced the longer it develops. It’s a great example of genre-blending and stylized filmmaking that utilizes human characters to tell an emotional, exciting story. Save the Green Planet! does everything right, and it’s hard to argue with anything on-screen when the movie looks, sounds, and feels this good. This ain’t Misery, it’s ecstasy.

SUMMARY & RECOMMENDATION: Save the Green Planet(!) features an impeccable script by Jun-hwan that keeps the focus on its human element and makes an otherwise despicable, maniacal presence feel sympathetic and tragic. Jun-hwan’s direction is as sublime as his writing. The flashback montages, combined with great use of the soundtrack and some clever special FX, make this film as aesthetically pleasing as the most beautiful neo-noir crime dramas.

—- However… the ending, while somewhat ambiguous, subverts the tragic tone of the overall narrative.

? Somewhere over the rainbow, way up high… did the story ever explain its numerous references to The Wizard of Oz (1939)?

I love movies, music, video games, and big, scary creatures.
View all posts by The Celtic Predator »
« ‘The Man from Nowhere’ (2010): A Great Introduction to Korean Action
‘Battle Royale’ (2000): The Movie Everyone Compares to “The Hunger Games” »